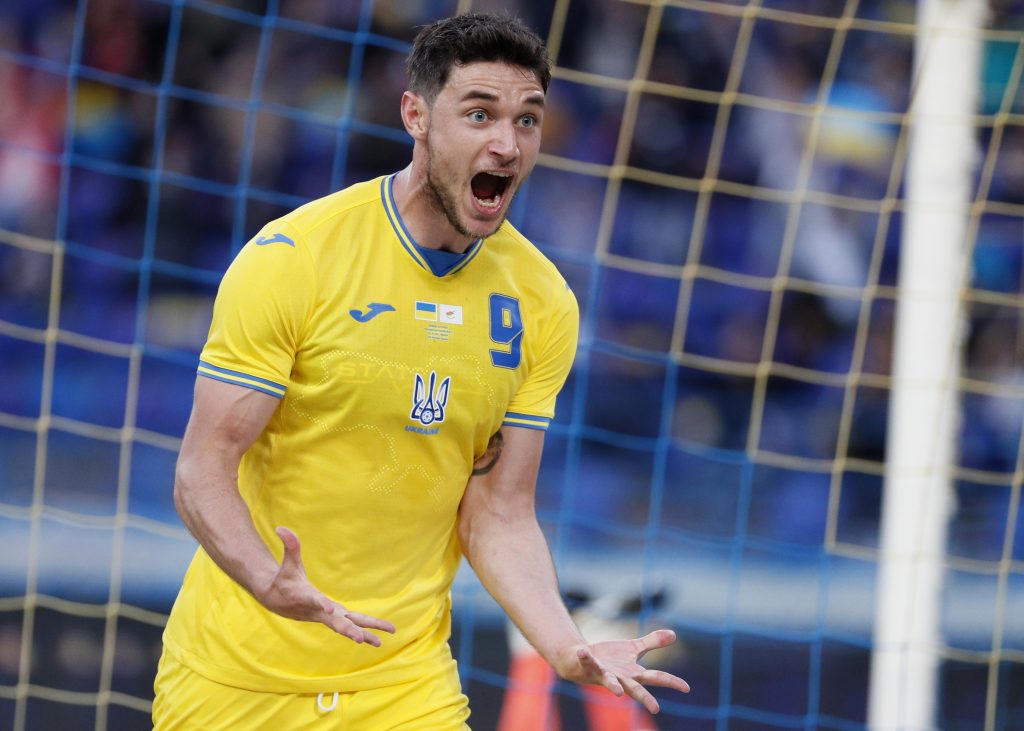 Ukraine has been in the international spotlight during this week’s build-up to Euro 2020 thanks to a scandal over the design of the national team’s football shirt. However, once the Ukrainian squad begins its European Championship campaign against the Netherlands on Sunday, coach Andriy Shevchenko will be hoping to make headlines on the pitch.

Euro 2020 is kicking off one year late due to delays caused by the coronavirus pandemic. This twelve-month postponement has not been kind to Ukraine. Under the guidance of former star striker turned national team manager Shevchenko, Ukraine qualified for Euro 2020 in memorable style, remaining unbeaten throughout 2019. The team’s qualifying campaign included a famous 2-1 victory in Kyiv over reigning European champions Portugal, and a swashbuckling 5-0 romp against Serbia in Lviv.

These successes saw Ukraine top their group and secure automatic qualification to the European Championship for the first time in the country’s history. However, the disruption of the covid pandemic subsequently robbed Ukraine of its Euro 2020 momentum.

While waiting for the championship to be rescheduled, Ukraine took part in the top tier of the Nations League, where they faced off against Europe’s heavyweights in UEFA’s newest international competition.

Andriy Shevchenko’s men began their Nations League campaign in September 2020 with a narrow win over Switzerland, before succumbing to an embarrassing 4-0 loss in Spain. Things then went from bad to worse.

In October 2020, the global pandemic struck Ukraine’s camp and left the squad without many of its key players. Shevchenko was forced to turn to youngsters such as Dynamo Kyiv’s 18-year-old Ilya Zabarnyi, who had only made his senior club debut one month earlier. This patched up Ukrainian team succumbed to a record 7-1 defeat against France in Paris.

Ukraine demonstrated considerable character to bounce back from this humiliation by beating Spain in Kyiv late in 2020. However, the country’s Nations League adventure ended on a sour note when a Swiss doctor ordered the entire Ukrainian squad to self-isolate due to a covid outbreak. This prevented Ukraine from playing their final fixture against Switzerland and resulted in a 3-0 forfeit loss, leading to Ukraine’s Nations League relegation.

While the 2020 Nations League games failed to match the excitement of Ukraine’s Euro 2020 qualifying campaign, they did produce a number of positive takeaways. First and foremost, these matches forced Shevchenko and his coaching staff to rethink their tactics when facing Europe’s top sides. The covid crisis also obliged Ukraine to call up a new generation of young players such as Zabarnyi, who has now established himself in the national side.

The current year has seen a series of steady if unspectacular performances from the national team. Ukraine began its latest World Cup qualifying campaign in early 2021 with a credible 1-1 draw in Paris which did much to banish the ghosts of last year’s surrender.

Subsequent draws in Kyiv against Finland and Kazakhstan have been less encouraging. Nevertheless, Ukraine go into Euro 2020 with an unbeaten record so far this year, and on the back of friendly victories over Northern Ireland and Cyprus.

The quality of recent opposition makes it difficult to judge Ukraine’s current form, but morale within the squad appears to be high as the team prepares to face the Netherlands, Austria, and North Macedonia in Euro 2020’s Group C.

Andriy Shevchenko will be looking to bolster his growing managerial reputation at Euro 2020. Ukraine’s record goalscorer took over the national team in 2016 but remains better known for his glittering career as a player with Dynamo Kyiv and AC Milan. Shevchenko is the youngest national team coach at this year’s European Championship and is widely tipped to make the transition to club football. A strong showing could see him emerge as a candidate to manage in Europe’s top leagues.

Ukraine has a poor record at previous European Championships. The country won just one game when making its debut in the competition as co-hosts in 2012, and failed to score a single goal while losing all three ties at Euro 2016. With this in mind, Shevchenko has repeatedly stated that his primary target during Euro 2020 is to make it into the knockout stages.

Shevchenko will be able to count on a relatively young group of players who offer plenty of experience at the highest levels of club and international football. Crucially, the spirit within the current Ukrainian national team squad is regarded as strong, which was not always the case going into previous tournaments.

Ruslan Malinovskiy, who plays his club football in Italy with Atalanta, is the closest Ukraine has to a talisman. He can shoot, assist, drive attacks forward, and is also a set piece specialist. Malinovskiy has been in sparkling form this season, ending the campaign with 16 goals and assists in his last 12 appearances.

Another of Ukraine’s brightest stars is Manchester City’s Oleksandr Zinchenko, who enjoyed an excellent year as part of the side the comfortably won the English Premier League and fell just short of UEFA Champions League glory.

Ukraine’s 25-year-old striker Roman Yaremchuk is another one to watch, having scored four goals during the Euro 2020 qualification campaign. Since 2017, Yaremchuk has made a name for himself in the Belgian league with Gent. He will be looking to showcase his talents this summer with a view to securing a lucrative post-championship transfer.

Thanks largely to the optimism generated by Ukraine’s barnstorming 2019 qualification campaign, expectations are relatively high ahead of Euro 2020. Fans are wondering whether this team can finally surpass the achievements of Ukraine’s “golden generation,” which reached the quarter-final of the 2006 World Cup with Shevchenko himself leading the front line.

The media frenzy over Ukraine’s new national team shirt, which features an outline map of the country complete with Russian-occupied Crimea along with patriotic slogans, has somewhat overshadowed the team’s preparations. However, it has also energized the Ukrainian public at a time when the war-weary but increasingly self-confident country is enjoying a prolonged period of nation-building progress. It is now up to Andriy Shevchenko and his promising squad to deliver the kind of Euro 2020 campaign that Ukrainian fans have long been waiting for.

Ukrainian village team Kolos Kovalivka are preparing to write a new chapter in what is one of the most romantic stories in modern football history when the club makes its Europa League debut in Greece.