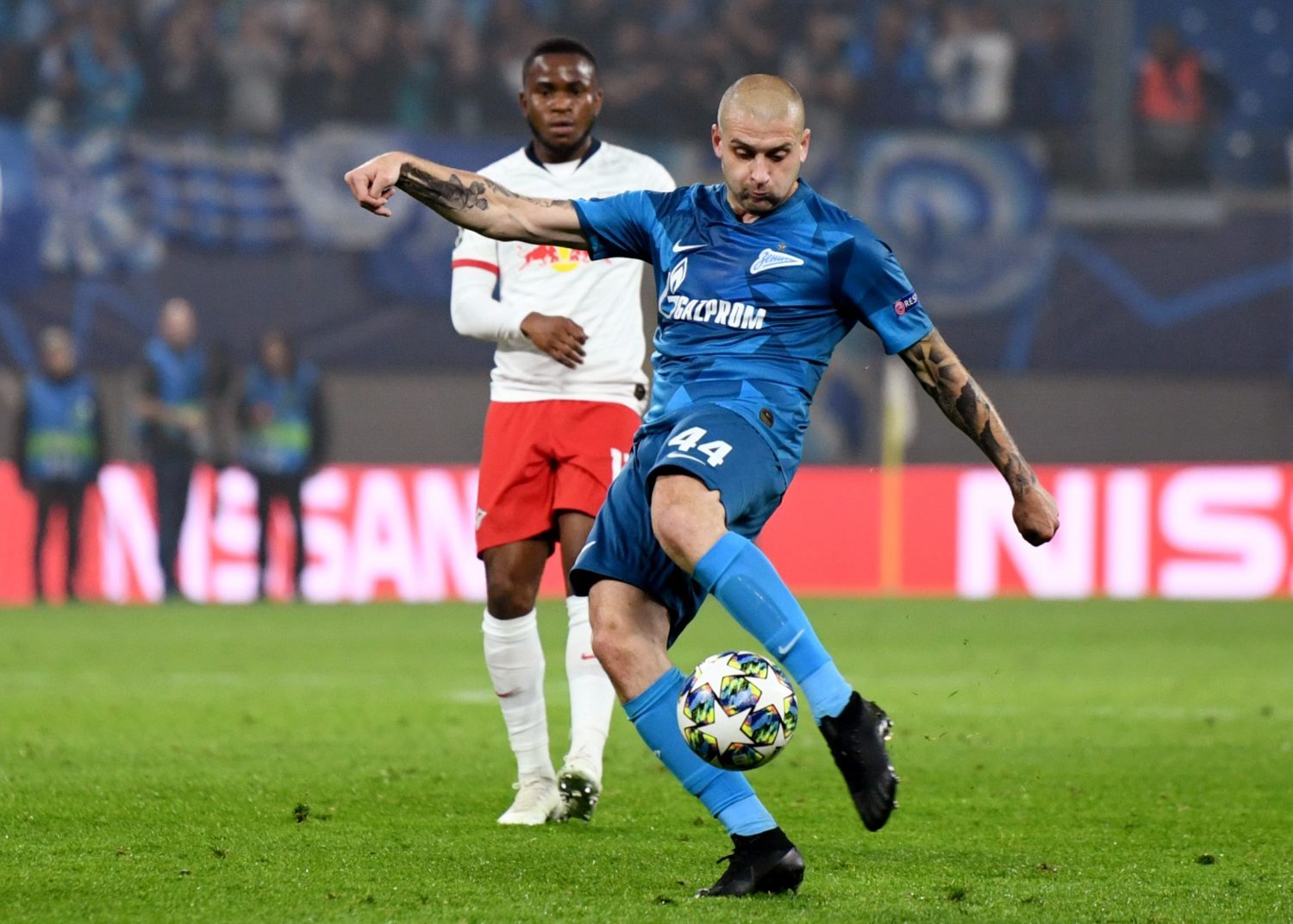 “Would you join Zenit Saint Petersburg if they offered you EUR 5 million a year?” Ukrainian footballer Roman Yaremchuk didn’t hedge or hesitate when asked this question in a late 2019 interview. “No,” he answered. “It’s a great question, but in today’s situation, I wouldn’t go. One hundred percent. I have everything I need in life and that is enough for me.”

Yaremchuk, who currently stars for Gent in the Belgian First Division and the Ukrainian national team, clearly has no qualms addressing the politically charged subject of Ukrainian footballers playing for Russian clubs. His comments generated headlines in the Ukrainian sporting press and beyond, but he does not speak for all Ukrainians on the subject. On the contrary, many of Yaremchuk’s compatriots support the right of players to join clubs in a country that is waging an undeclared war against Ukraine. There should be no politics in sport, they argue.

The debate over Ukrainian footballers playing in Russia is an extension of a broader discussion that regularly preoccupies much of Ukrainian society. What sort of relationship should Ukraine pursue with today’s Russia? Amid an ongoing conflict that has torn apart intimate ties between the two countries stretching back generations, where should the line of disconnect between Ukraine and Russia now be drawn? Should it be exclusively at the governmental level, or should it also extend to a freeze in all cultural or sporting relations?

Ukrainians have wrestled with this issue ever since the first shockwaves of Russia’s invasion washed over the country in early 2014. Numerous Ukrainian pop stars have been castigated for continuing lucrative tours of Russia, with the country famously withdrawing from the 2019 Eurovision Song Contest following a scandal over national selection winner MARUV’s regular Russian concerts. Meanwhile, dozens of Russian stars who once treated Ukraine as an extension of their own domestic touring circuit have become unwelcome due to their support for the war in Ukraine or their illegal entry into Russian-occupied Crimea.

Given football’s huge popularity in both countries, it was inevitable that the sport would occupy a prominent place in this debate. Since the war began in 2014, the most high-profile example of a Ukrainian player signing for a Russian team has been Yaroslav Rakitskiy’s January 2019 transfer from Ukrainian champions Shakhtar Donetsk to Zenit Saint Petersburg. The move led to considerable public criticism of Rakitskiy, in part because he had long been accused of lacking patriotism. Prior to his switch to the Russian club, the former Shakhtar player had already achieved a significant degree of notoriety for refusing to sing the Ukrainian national anthem while representing his country. He had also provoked controversy on a number of occasions via social media activities seen as sympathetic to Russia’s war effort.

In the wake of his move to St. Petersburg, Rakitskiy’s past record of pro-Russian posturing made him an obvious target for online abuse. It also appears to have made him surplus to requirements for the Ukrainian national football team. Despite playing over 50 times for Ukraine including six appearances in 2018, Rakitskiy has not featured in a single national squad since heading north. While there has been no official comment from the Ukrainian Football Association, few believe this is a coincidence. “Whatever happens, you have to respect your people and your country,” former Ukraine national team player Artem Fedetskiy said of Rakitskiy’s predicament. “I think it will be very complicated for (national team trainer) Andriy Shevchenko to select him now.”

Rakitskiy himself is in no doubt that his international career has been cut short by geopolitics. After waiting almost a year for a call-up that never came, in November 2019 he officially announced his retirement from international football and fired a parting shot at Ukraine’s footballing authorities. “I have been expecting a call to join the Ukrainian national team squad throughout 2019, but football has become politicized. Fear and not football skills are what guides those behind the national team selection,” Rakitskiy wrote in an Instagram post announcing his departure.

While Rakitskiy’s prior conduct made his decision to play in Russia particularly controversial, there has been no shortage of Ukrainian players prepared to make the switch since 2014. For most, politics has not been a factor, one way or the other. The Russian Premier League (RPL) offers players the chance to earn significantly higher salaries, while a greater number of Russian clubs qualify for European competition each season, making the RPL a potentially attractive stepping stone towards the riches of Western Europe’s top leagues. Following the success of the 2018 World Cup, Russian football is also experiencing a domestic boom of its own, with new stadiums and record crowds across the country.

With a wealthier national league, a common language and a familiar culture, Russia is an obvious destination for Ukrainian footballers looking to further their careers. Rakitskiy’s former Shakhtar teammates Ivan Ordets and Oleh Danchenko are among those to have settled across the border in recent seasons. Even the current poster boy of the Ukraine national team, Oleksandr Zinchenko, spent a season with Russian Premier League side Ufa in 2015-16 before signing for Manchester City. Meanwhile, Ukraine’s most capped player of all time, Anatoliy Tymoshchuk, is currently the assistant trainer at Zenit alongside Rakitskiy.

At the same time, many of the country’s football professionals share Yaremchuk’s belief that the current conflict between the two countries makes the idea of working in Russia inappropriate. Speaking in January 2020, Ukrainian trainer Roman Hryhorchuk, who currently manages Kazakhstan Premier League champions Astana, revealed he had turned down “at least five” invitations to manage in Russia since the outbreak of hostilities in 2014. “I used to be very interested in working in Russia, which I considered a strong league. But it is now impossible,” he commented.

Prior to 2014, the difference in quality between Ukraine and Russia’s domestic leagues was far less pronounced. However, the Ukrainian Premier League has experienced a serious decline since the outbreak of hostilities with Russia. A number of leading teams have ceased to operate entirely, while perennial champions Shakhtar Donetsk have been forced into internal exile alongside other clubs with home bases in Russian-occupied eastern Ukraine. Elsewhere, the financial support from oligarchs that previously kept many otherwise unprofitable teams afloat has dried up. As a result, the current Ukrainian Premier League is a shadow of its former self.

This is not how things used to be. In Soviet times, Ukraine had been the powerhouse of the USSR football scene, with talisman club Dynamo Kyiv providing the bulk of players for the national side throughout the 1980s. While this did not translate into similar dominance during the post-Soviet era, Ukrainian teams performed comparatively well in European competition and often came out on top during rare ties against Russian opposition. As recently as 2009, three of the last sixteen clubs in the UEFA Cup hailed from Ukraine, highlighting the strength in depth of a league that consistently ranked among Europe’s top ten.

The relative success of Ukrainian teams prior to 2014 helped make the Ukrainian Premier League one of the few national institutions to firmly establish itself in the post-Soviet Ukrainian imagination. A lively fan culture grew up around UPL clubs, with each team attracting groups of self-styled “ultras” who loosely modeled themselves on a romanticized version of 1980s English hooligan culture.

These ultras put their regional rivalries to one side in 2014, adopting staunchly patriotic stances during both the Euromaidan Revolution and the subsequent Russian military intervention. Shakhtar supporters provided security for Euromaidan protests in Donetsk, while many fans of teams in both Crimea and eastern Ukraine were eventually forced to flee as their home regions came under Kremlin control. In Kharkiv, the largest city targeted during Russia’s spring 2014 campaign to spark uprisings across eastern and southern Ukraine, supporters of local club Metalist played a key role in reclaiming the streets. Indeed, it was football fans in Kharkiv who created the obscene “Putin Khuylo” chant (literally “Putin is a d**k”) that has since become an unofficial anthem of Ukrainian wartime defiance. Unsurprisingly, Ukraine’s football fan ultras have also been well-represented among the ranks of those serving in volunteer battalions and the Ukrainian military.

With Ukraine’s football scene subject to such heightened patriotic passions, it is easy to understand why the idea of Ukrainians choosing to play for Russian clubs does not sit well with everyone. Nevertheless, many Ukrainian footballers will continue to regard the Russian Premier League as a logical career move offering financial incentives and the promise of greater international exposure. Others, whether motivated by principles or a desire to avoid upsetting their national team chances, will pass up on opportunities to join Russian clubs. The choices they face reflect the wider challenges within Ukrainian society as it struggles to find the right tone for future relations with Russia. Despite six years of war and propaganda, strong ties still link the two countries. However, the indivisibility of old is already a thing of the past.