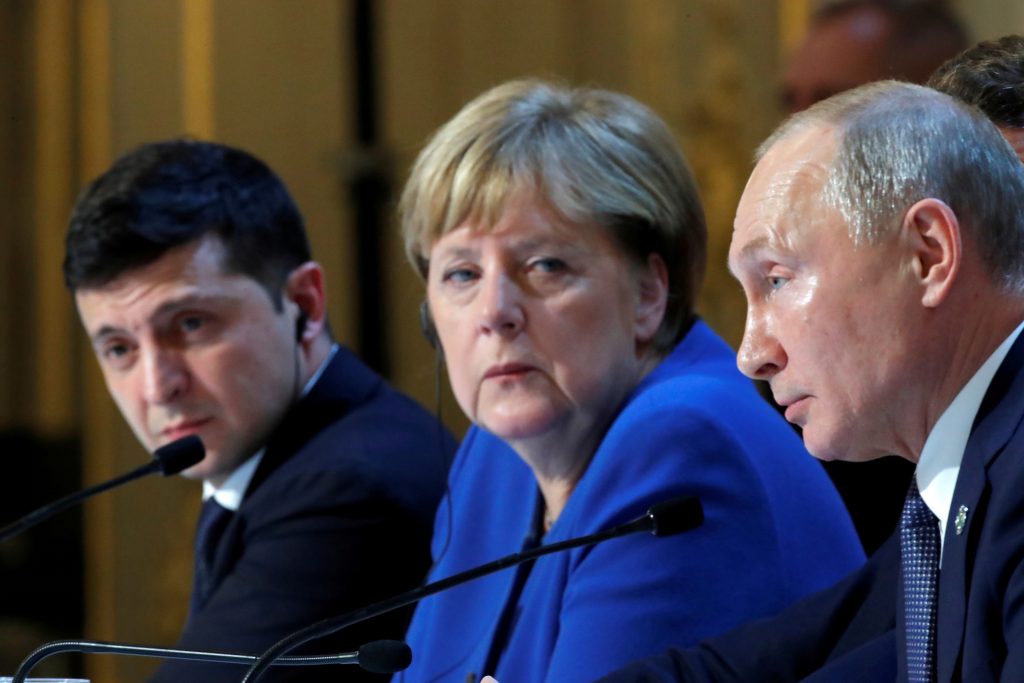 The April 16 prisoner exchange in eastern Ukraine was the third such swap between Moscow and Kyiv since the election of Ukrainian President Volodymyr Zelenskyy almost exactly one year earlier. However, unlike the previous two exchanges, this one passed off with virtually no fanfare. Instead, it was accompanied by questions about the identities of the released prisoners and grumbling over restricted media access. This largely unheralded event reflected rapidly receding hopes of a breakthrough in the six-year undeclared war between Russia and Ukraine. Zelenskyy’s April 2019 election triumph owed much to his promise of bringing peace to Ukraine, but after a year of largely fruitless efforts, it is becoming increasingly obvious that Russia alone has the power to end the war. However, it is far from clear whether Vladimir Putin actually wants peace.

From the moment he first declared his intention to run for office, Volodymyr Zelenskyy has consistently identified ending the conflict with Russia as the number one priority of his presidency. On paper at least, he appeared well-placed to achieve this goal. A Jewish Russian-speaker who had spent much of his previous showbiz career working in the Russian TV and movie industries, Zelenskyy was the polar opposite of the crude nationalist caricatures who dominate Kremlin propaganda depictions of Ukraine. Instead, he represented a new civic understanding of Ukrainian nationality that defied the narrow linguistic and ethnic definitions of old.

As president, Zelenskyy has maintained his focus on peacemaking. Indeed, his single-minded approach to ending the war has led to repeated accusations that he is conceding too much to the Kremlin and spawned an entire anti-capitulation movement. It is not hard to understand why some are uncomfortable with his readiness to compromise with the Kremlin. In order to secure a highly prized first face-to-face meeting with Putin, Zelenskyy agreed to withdraw Ukrainian troops from a number of strategic front line locations in eastern Ukraine and committed the country to accepting a Russia-friendly interpretation of the Minsk Peace Accords by adopting the so-called Steinmeier Formula. More recently, he has flirted with the idea of entering into direct talks with Russia’s proxies in eastern Ukraine. Zelenskyy has also been strikingly diplomatic in his framing of the conflict. Whereas his predecessor Petro Poroshenko delighted in pointing the finger at Moscow and regularly depicted the war as a struggle against Russian imperial aggression, Zelenskyy has rarely named Russia explicitly.

Policymakers in Kyiv presumably hoped that this accommodating stance would lead to reciprocal measures from Moscow. Instead, Russia has done virtually nothing during the first year of the Zelenskyy presidency to suggest that it is genuine in its stated desire for peace. Far from matching Ukraine’s concessions, Moscow has pointedly refused to soften its negotiating positions while at the same time strengthening its grip over the occupied regions of Donetsk and Luhansk in eastern Ukraine.

The first indication that Russia was not ready to play nice came in the immediate aftermath of Zelenskyy’s election. Just three days after the vote, Putin announced plans to issue passports to millions of Ukrainian citizens in Russian-occupied eastern Ukraine. This ploy promised to transform the regions into “passport protectorates”, creating a pretext for endless Russian interference and making any future attempts at reintegration into Ukraine hugely problematic. According to figures released by the Russian Ministry of Internal Affairs, around 200,000 passports had been issued by January 2020.

On the diplomatic front, Russia has refused to countenance any revisions of the Minsk Peace Accords and continues to insist on elections in eastern Ukraine before the Ukrainian authorities regain control of the regions and the accompanying international border. This intransigence is in stark contrast to the relative flexibility displayed by Zelenskyy’s Ukraine, and leaves little room for a negotiated settlement. Meanwhile, on the domestic front, recently proposed changes to the Russian Constitution will make it impossible for future Russian governments to reverse the annexation of Crimea, thereby committing the country to perpetual confrontation with Ukraine for generations to come.

Russia’s passport imperialism and uncompromising diplomacy might be easier to accept if the fighting itself had stopped. Unfortunately, this has not been the case. Ukrainian soldiers continue to die on a regular basis along the front lines of eastern Ukraine, with 2020 so far proving more deadly that 2019. According to figures released by the Ukrainian Prosecutor General’s Office, Ukraine lost 41 soldiers from the start of the year until March 19, compared to 34 during the same period one year earlier. The first few months of 2020 also saw some of the fiercest fighting in eastern Ukraine since the battles of summer 2014, with Russian hybrid forces launching a series of artillery bombardments and localized advances on February 18.

Perhaps the clearest indication of Putin’s true intentions can be found in his own public statements. Time and again over the past year, the Russian leader has underlined his contempt for Ukrainian independence and questioned Ukraine’s right to statehood. During his annual press marathon in December 2019, he referred to southeastern Ukraine as ancestral Russian lands that had been inexplicably and erroneously handed over to Ukraine by the Bolsheviks. In a February 2020 interview with Russian state news agency TASS, he reiterated his oft-stated belief that Russians and Ukrainians are actually “one people” and claimed dark geopolitical forces were at work to divide Ukraine from Russia. These are not the words of a man preparing to make peace and build constructive neighborly relations.

Putin’s actions demonstrate that the election of Volodymyr Zelenskyy has actually changed nothing. In reality, Russia’s war aims remain the same as they were in 2014. Ideally, the Kremlin would like to reassert its authority over Ukraine and draw the country back into the Russian orbit. If this proves impossible, Moscow’s priority is to prevent Ukraine’s Euro-Atlantic integration by destabilizing the country and making it ungovernable. In other words, Ukraine should either be Russian or it should be a failed state.

The overriding objective is to make sure a successful and democratic Ukraine does not emerge to serve as a source of inspiration for the Russian public. Putin remains haunted by the rapid Soviet retreat from Central Europe and the subsequent collapse of the Soviet Union itself. He fears a repeat of the same historic processes, and his worst nightmare is a Moscow Maidan inspired by Ukraine’s own struggle for democracy. This makes any Russian retreat from Ukraine unthinkable, and explains why the Kremlin is prepared to pay such a high geopolitical price for a seemingly futile war that has been locked in stalemate for the past five years.

The first year of the Zelenskyy presidency has not brought us any closer to peace in Ukraine, but it has hopefully helped to dispel various delusions about the conflict. In Ukraine itself, Zelenskyy’s failure to make progress has helped debunk claims that his predecessor Petro Poroshenko was guilty of artificially prolonging the war for personal and political gain. Internationally, Putin’s refusal to compromise, together with his imperialistic rhetoric and straightforward failure to live up to simple ceasefire commitments, have combined to expose the emptiness of his peacemaker posturing. This should stiffen Western resolve to hold Putin accountable. For the past six years, the international community has searched desperately for a compromise solution to the crisis in Ukraine. Zelenskyy’s failure to achieve a breakthrough should now draw a line under these efforts and focus attention instead on forcing Russia to end its aggression.