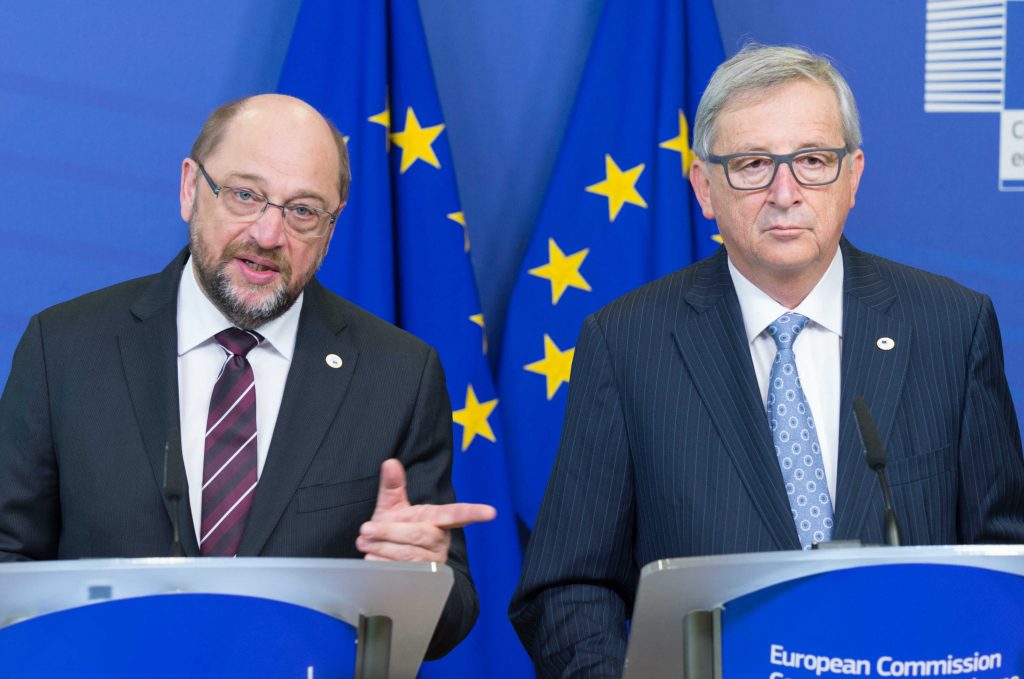 Earlier this month, Jean-Claude Juncker and Martin Schulz, presidents of the European Commission and Parliament, respectively, published an appeal for continental solidarity in which they criticized “anyone who believes that the time of the nation-state has come” as “out of touch with reality.”

The inaccuracy of Juncker and Schulz’s statement is reflected in the comparative popularity of Europe’s leading nationalist, Russian President Vladimir Putin, and internationalist, German Chancellor Angela Merkel. While Putin continues to enjoy an approval rating of over eighty percent despite having plunged Russia into diplomatic and economic isolation, almost two-thirds of Germans do not want Merkel to remain chancellor after the 2017 elections. With the rejection of the EU-Ukraine Association Agreement by Dutch voters and projected electoral gains next year by far-right nationalists in France, Germany, and the Netherlands, Russia and Ukraine stand to become the unintended beneficiary and victim, respectively, of the backlash against the post-national vision that Merkel, Juncker, and Schulz represent.

It was not supposed to be this way. A quarter-century after the inauguration of the European Union, “national vanity” was meant to have been supplanted by a wonderland of multilateral institutions and supranational ideals. But the terrible irony is that the relentless insistence on humanitarianism as the basis of Europe’s post-national identity has created misperceptions. Many Europeans now mistake the attempt to contain the greatest threat to their collective security since the end of the Cold War—the westward expansion of a nuclear-armed Russian dictatorship—for an elitist crusade divorced from the real concerns of everyday life.

In the absence of any agreed-upon definition of European identity, the advocates of the European project have long put forward a free-floating humanitarianism as its key component, an assertion that has been subject to an unprecedented test since Merkel decided to unconditionally open Germany’s borders to migrants in the fall of 2015. The desire to save others is noble, but the problem is that pure humanitarianism does not recognize any limits, either to the resources that must be expended or the number of people who must be saved.

In reality, humanitarianism cannot exist independently of politics, which is all about working with limiting factors, public trust among them. The huge outlays in spending, perceived disregard for critical voices, and widely publicized crimes involving migrants that followed have led to deep fatigue, if not outright disillusionment, with Europe’s charitable premise. For a Ukraine struggling with at least as many internal refugees as entered all of Europe last year, there is precious little sympathy left among EU citizens, for whom the Donbas is as remote as Damascus.

The row within the EU over the distribution of migrants, pitting Western against Eastern member states, has also exacerbated the traditional stigma surrounding Eastern Europe and, by extension, Ukraine. Even in the best of times, the languages, histories, and cultures of the East remain alien to most Western Europeans. In the midst of actual crisis, dissent is taken as proof of Eastern Europe’s ingratitude and perennial backwardness. That the Eastern “opposition” includes both pro-EU and Euro-skeptic governments is rarely touched upon, although Western Europeans rightly assume that Ukraine, should it ever join the EU, would form part of this relatively conservative bloc. Add in the country’s massive corruption, and the likelihood that European taxpayers will have the patience to “stand up” a fully-functioning Ukraine grows even slimmer. All of which is good news for a Kremlin that can claim victory as long as Ukraine continues to stagnate.

Moreover, the debate over post-national ideals has sapped the credibility of EU leaders at precisely the moment when their advocacy for the Ukrainian cause is needed most. The notion that nationality and borders are increasingly irrelevant has always seemed more true to polyglot European elites accustomed to studying, holidaying, and working in multinational settings, even as the working classes of their home countries remain rooted in a sense of place, dialect, and cuisine. For better or worse, it is the elites who are entrusted with setting the national agenda, and the considerable sacrifices they demand in the name of post-nationalism, first in the Eurozone and now in the migration crisis, have led to nothing less than outright rebellion among many voters. As the failure of the Association Agreement referendum in the Netherlands has shown, Ukraine is already synonymous with EU overreach in the mind of much of the public.

Juncker has promised that history will vindicate Europe’s post-national idealism, but as the Bosnian writer Gojko Berić once observed, contemporaries cannot await the verdict of history. In its staring contest with the West over Ukraine, Russia, for all its weakness, can fall back on the well-worn tropes of its patriotic tradition, unencumbered by the painstaking work of consensus-building. Europe and America, on the other hand, must struggle ever harder to justify their involvement in a “quarrel in a far away country between people of whom we know nothing,” to use Neville Chamberlain’s phrase.

This is the paradox of the post-national idea: Juncker and Schulz claim that it is time to “fight” for a “shared Europe,” but when was the last time anyone was prepared to carry the twelve-star flag of the European Union into battle, except for the Ukrainians?

Andrew Kornbluth holds a PhD in history from the University of California, Berkeley.