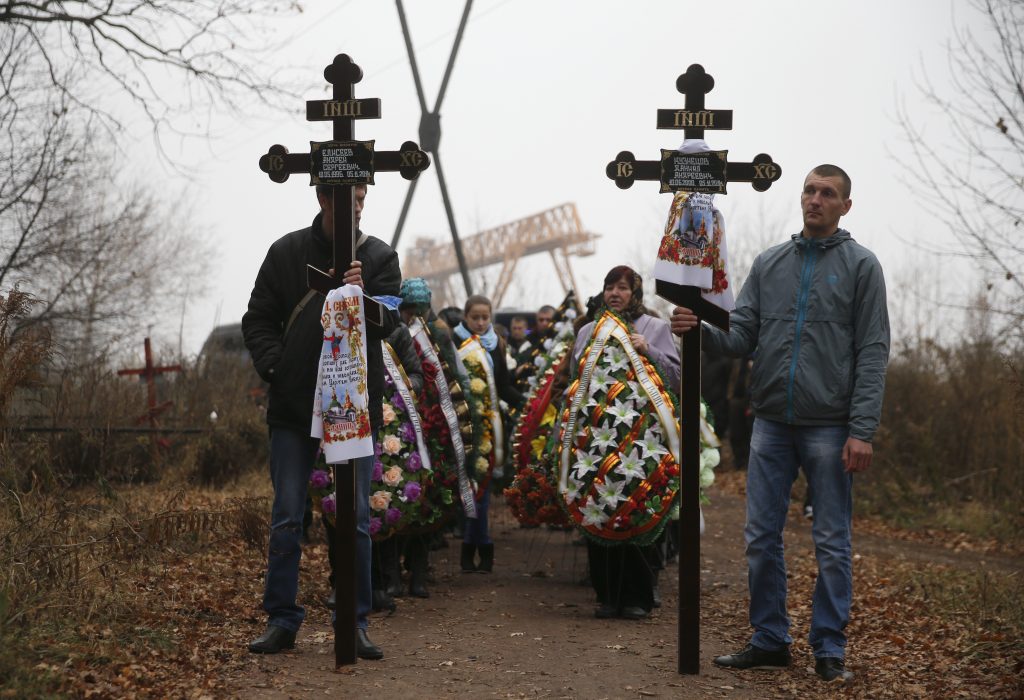 Analysts: Moscow Fights Now with Mercenaries and Local Trainees, But in 20 Weeks May Again Send Its Own Troops

The Russian-Ukrainian conflict in southeastern Ukraine is sliding back quickly into all-out war. Ukraine’s Defense Ministry said this morning that its forces have killed 200 separatist fighters and destroyed four tanks, plus artillery in the past twenty-four hours of battle at the airport in Donetsk city. While those specific numbers were not independently confirmed, fighting has surged throughout the Donbas region and both sides have buttressed their forces in the war zone as a two-month-old attempt at a cease-fire has disintegrated.

In that September 5 truce deal, Russian President Vladimir Putin paused Moscow’s military assault in hopes that Ukraine’s elections would bring him the pliant government in Kyiv that he demands, say analysts at the Atlantic Council and elsewhere. Ukrainians voted for European-style democracy instead, so Putin now will resume his military pressure. For the moment, he is likely to limit his financial and political cost by using mainly the proxy forces that Russia has been training and arming in Donetsk and Lugansk provinces.

But Ukraine and its international partners should prepare now for the threat of a large invasion of Ukraine by Russia’s own regular forces in the spring, according to analysts such as Georgetown University professor and former Pentagon strategist Philip Karber. Russia’s annual conscript rotations are timed to allow a large, trained force to be placed on Ukraine’s borders in the spring, as happened this year, Karber told Ukraine’s TSN television network this week. “They could do that again in the spring of 2015,” adding to forces that already surround much of Ukraine in an arc from the Russian-controlled enclave of Transnistria in the southwest to Crimea in the south and in Russia proper to the east and northeast. “That is going to be a very dangerous moment,” Karber said.

It is not clear how far or how fast the United States and its European allies will move to help defend Ukraine. “The West should prepare new, sectoral sanctions to be imposed if forces from the [Lugansk People’s Republic] and [Donetsk People’s Republic] seize more Ukrainian territory,” according to the Atlantic Council’s Eurasia Center director, John Herbst. “The Obama administration should reverse its strategically naïve prohibition on defensive weapons sales to Ukraine,” said Herbst, a former US ambassador to Ukraine. “Such sales would make it harder for Moscow and its surrogates to take additional Ukrainian territory.”

This week’s Republican victory in US congressional elections will strengthen Congress’ effort to provide such arms, but it remains unclear when that could happen. “We will make every effort” to authorize US “defensive weapons” for Ukraine when Congress meets from November 12 until sometime in December, Republican Senator Jim Inhofe told reporters in Kyiv last week. He and other Republicans have not said when they might expect to see any aid deliveries start.

The most explicit talk of any new sanctions has come from German Chancellor Angela Merkel, who suggested that the transatlantic alliance may consider restrictions merely on some additional Russian individuals “who bear responsibility in eastern Ukraine.” She proposed this to punish Russia’s recognition of elections and new governments proclaimed November 2 by the Moscow-backed Donetsk and Lugansk “people’s republics.” Merkel, who is central to any negotiation of new sanctions between the US and Europe, has given no sign of readiness to toughen the broad, sectoral sanctions on Russia’s economy.

Prospects for critical western financial support also are unclear. The International Monetary Fund agreed in April to provide up to $17 billion in support over two years, with another $10-15 billion to come from other donors. By September, the war had exploded Ukraine’s costs and shriveled its economy, and the IMF suggested that an additional $19 billion would be required. As the IMF awaits the formation of a new, post-election Ukrainian government, its finance minister said last week that the next tranche of aid from the April package will likely be delayed until after the new year.

Ukraine’s foreign reserves shrank by 23 percent in October, “a huge drop,” and “the next review and sign-off of IMF funds looks a very, very long way away,” writes Standard Bank economist Timothy Ash. “The West needs to … either fast track IMF disbursements, or beef up the program” with more funds, he says in an e-mailed comment today.

Since Ukraine, Russia, and the Russian-backed separatists signed the September 5 Minsk Protocol, the cease-fire has only limited the fighting, rather than stopping it. The agreement’s provisions for disarmament and a restoration of Ukrainian government control with new local autonomy have been ignored. To the contrary, while Russia withdrew its main combat forces, including tanks and paratroopers, it has kept special forces and about 250 to 300 troops as trainers within Ukraine, NATO officials say. There is no doubt about the trainers’ presence, partly because some of them have met Western journalists in Donbas.

Russia and its client “people’s republics” have used the two-month lull to build forces for the next round of war. The “Donetsk People’s Republic” has sent notices to local men announcing that they have been drafted into its forces “on the basis of federal law of the Russian Federation,” according to copies of the documents published by the Ukrainian news website Ostrov.

“Putin will not be sending his own [combat] troops; he’s now training an army of 30,000” in Donbas, said Atlantic Council Senior Fellow Adrian Karatnycky in a Wall Street Journal interview.

Russia has been sending weapons to its proxy forces in Ukraine, including 32 tanks, artillery and 30 truckloads of supplies that crossed the border yesterday, the Ukrainian government says. Russian troops and military vehicles have been moved from the southern Russian city of Rostov-on-Don to the Ukrainian border, National Security and Defense Council spokesman, Andriy Lysenko, said yesterday. Independent journalists in Donbas have made similar reports. On Sunday, reporters from Agence France-Presse, Buzzfeed and Mashable all separately described dozens of military trucks driving to Donetsk, towing artillery pieces.

Ukrainian-British journalist Askold Krushelnycky said in an e-mail message this week that, as he drove this week from the northeastern city of Kharkiv into Lugansk province, increased numbers of Ukrainian military transports, tank carriers and rocket launchers were on the roads, reinforcing Ukrainian forces near the front lines with the separatists. He cited Ukrainian military officers as saying that Russian and Chechen fighters, believed to be mercenaries, had crossed into Ukraine in preparation for a new offensive.

Further south, on the Azov Sea, shelling has intensified around the Ukrainian port of Mariupol. Over the past two weeks, Aleksander Zakharchenko, the Donetsk militia leader who was declared elected prime minister of the province’s “people’s republic” on Sunday, has vowed that the rebel forces will soon launch an offensive to seize back the portions of the province still under Ukrainian army control.

Image: Mourners in the village of Grabari, outside Donetsk city, carry crosses, memorials and the coffins of two teenagers killed while playing outside a school. As fighting has re-escalated between Russian-sponsored rebels and the Ukrainian army, Amnesty International has criticized both forces for indiscriminate attacks that have killed civilians. (Reuters/Maxim Zmeyev)