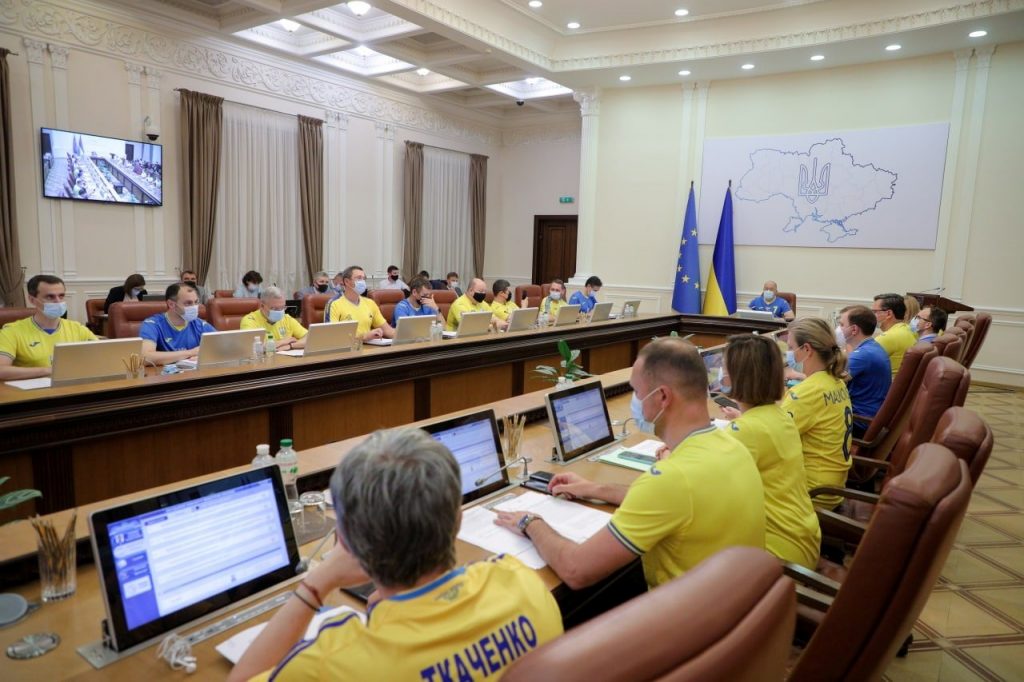 At first glance, the jubilant mood in Ukraine may not seem particularly noteworthy. After all, fans across Europe (and beyond) are currently reacting with similarly exaggerated emotions to the highs and lows of the European Championship. What makes Ukraine stand out is the scope of the celebrations, which have gone far beyond the traditional boundaries of the football fraternity and captured the imagination of wider Ukrainian society.

Many of the Ukrainians posting on Tuesday night had no prior interest in football whatsoever, and cared little about the intricacies of the beautiful game. They stayed up until well past midnight to cheer on their team precisely because in today’s war-weary but increasingly self-confident Ukraine, success at Euro 2020 is about much more than football alone.

In order to understand why the progress of the national football team strikes such a chord with the Ukrainian public, you must first appreciate the complex imperial origins of the country’s ongoing seven-year war with Russia.

Ever since Vladimir Putin first ordered the invasion of Crimea in February 2014, the ensuing crisis has been presented to international audiences as a primarily geopolitical struggle between Russia and the West, with Ukraine frequently cast as a hapless and largely passive pawn caught between rival great powers. This global perspective is both incomplete and misleading. Crucially, it ignores the decisive role played by ordinary Ukrainians and their efforts to build a democratic, European future for their country beyond the Russian sphere of influence.

Over the past three decades, Ukraine’s nation-building progress has increasingly come to define Russian foreign policy, creating a series of challenges for Moscow that many in the Kremlin regard as existential in nature. Putin in particular is said to have been obsessed by Ukraine since virtually day one of his presidency.

It is not difficult to see why. The loss of Ukraine would seriously weaken Russia’s claims to superpower status and relegate the country to the ranks of regional powers. It would cut Moscow off from a close neighbor that has been under Russian domination for centuries, creating a dangerous precedent for the many potential independence movements currently lying dormant within the vast confines of the patchwork Russian Federation. It would also undermine the whole basis of Russia’s foundation myth, which places Ukrainian lands at the very heart of the country’s national story.

Most importantly of all, if Ukraine were allowed to become a success story of democratic transition, it would serve as a powerful catalyst for political change inside Russia itself. To Putin and his inner circle, this prospect conjures up nightmare visions of the democratic uprisings that swept through Soviet Central Europe in the late nineteen-eighties before culminating in the 1991 collapse of the USSR. They are prepared to go to almost any lengths in order to prevent Ukraine from sparking a repeat.

Moscow’s current struggles with Ukrainian statehood are nothing new. For centuries, successive Russian regimes have sought to suppress Ukraine’s independence aspirations via everything from direct military intervention and economic coercion to enforced russification. In parallel, great effort has been made to deny and discredit the entire notion of a separate Ukrainian nation.

During the czarist era, the Ukrainian language was subjected to widespread restrictions and officially reduced to the status of dialect, with Ukrainians classified as the “Little Russian” branch of the Russian nation. In Soviet times, the authorities pushed the narrative of Russia and Ukraine as brother nations while demonizing any expressions of actual independence. Ukrainian identity was tolerated in the context of folklore and cultural heritage, but any hint of statehood aspirations remained strictly taboo and was subject to severe punishment.

In the post-Soviet era, Putin has enthusiastically embraced this long tradition of Ukraine denial. He has repeatedly expressed his believe that Ukrainians and Russians are “one nation,” and openly questions the historical validity of Ukrainian claims to whole regions of the country’s modern territory. One of Putin’s most notorious comments on this topic came in 2008, when he reportedly told US President George W. Bush that Ukraine was “not even a country.”

Senior Kremlin officials often echo these sentiments and sometimes go even further than Putin himself. During a recent interview with the Financial Times, influential former Putin advisor Vladislav Surkov claimed Ukraine “does not really exist.” Surkov’s replacement as Russia’s point man on Ukraine, Dmitry Kozak, warned in April 2021 that any military escalation in eastern Ukraine would mark “the beginning of the end” for Ukraine.

Meanwhile, the Kremlin-controlled Russian mass media routinely explores topics such as the allegedly manufactured and foreign origins of Ukrainian national identity. Similarly disparaging narratives are amplified on a daily basis by Moscow’s troll factories in online comment sections and social media platforms around the globe. It would be no exaggeration to claim that Ukraine denial is the unofficial state policy of the Putin regime.

One of the most recent examples of Russia’s war on Ukrainian identity came during the buildup to Euro 2020, when Kremlin officials lodged an official complaint over the design of Ukraine’s national football team jersey. Moscow demanded the removal of an outline map of Ukraine from the front of the shirt because it featured Russian-occupied Crimea, and also objected to the inclusion of traditional patriotic slogans which the Kremlin inaccurately linked to WWII Nazi collaboration.

Such tactics are all too familiar. Indeed, Nazi slurs have consistently occupied a central place in Russian efforts to discredit Ukraine’s national liberation movement since the height of the Cold War, and have been a prominent feature of the information war that has accompanied Russian military aggression over the past seven years.

For Ukrainians, these ongoing attacks on their country’s identity serve as a constant reminder that Russian ambitions stretch far beyond the current occupation of Crimea and eastern Ukraine’s Donbas region. They are well aware that Moscow does not merely seek to secure a strategic victory over Ukraine; Russia’s ultimate goal is Ukraine itself.

This is why the success of the Ukrainian national team at Euro 2020 resonates so loudly throughout Ukrainian society. At a time when Ukraine’s right to statehood is being openly threatened by a resurgent Russia, the European football championship offers the country a priceless opportunity to fight back and assert an independent identity on the international stage.

Ukraine’s Euro 2020 odyssey is not over yet. It may not last beyond Saturday’s quarterfinal clash with England in Rome, but the progress of Andriy Shevchenko’s team to the latter stages of the competition is already assured of a place in the Ukrainian national narrative. In purely sporting terms, it represents the country’s most impressive performance to date at a European championship. From a nation-building perspective, Euro 2020 is another small but significant step in Ukraine’s ongoing escape from empire and journey towards European integration.