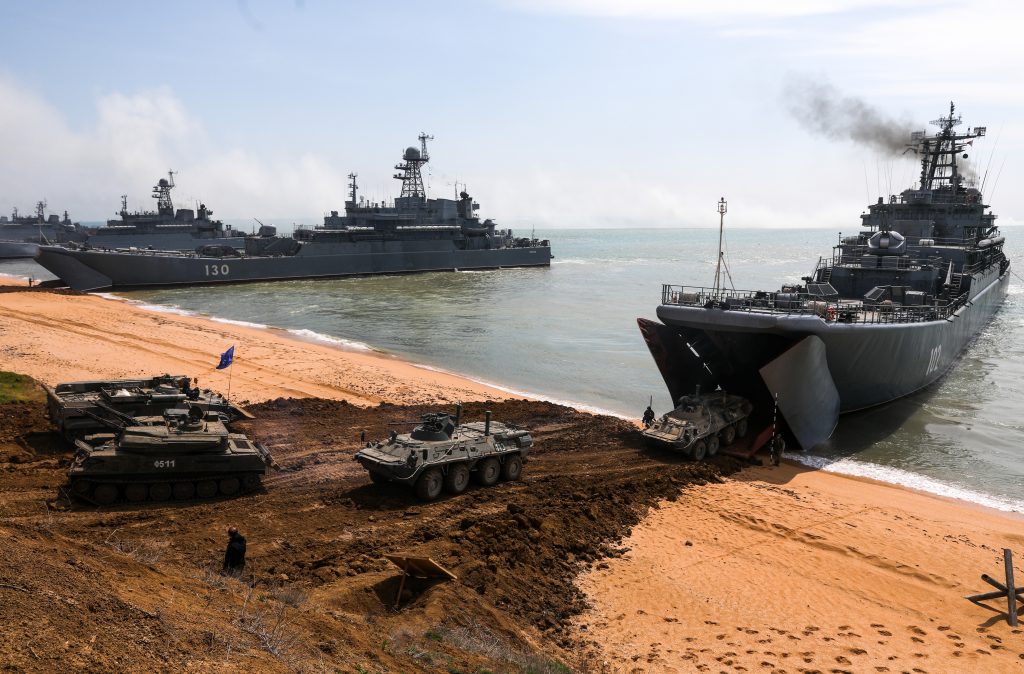 Spring 2021 saw the biggest Russian military buildup on the Ukrainian border since the seven-year war between the two countries first erupted in 2014. While Moscow’s late April announcement of impending Russian troop withdrawals initially eased international concerns over the possibility of a new Kremlin offensive, current intelligence reports indicate that the vast majority of Russian forces remain in position close to the border. A major escalation in Europe’s only active war cannot be ruled out.

It is unclear whether Russia’s recent bout of saber-rattling was an act of geopolitical intimidation or a genuine dress rehearsal for a full-scale invasion of Ukraine. The buildup certainly succeeded in attracting international attention while underlining Russia’s overwhelming military superiority in its confrontation with Ukraine. Clearly, Vladimir Putin wants to keep up the pressure and maintain the initiative in a conflict he launched seven years ago.

Neither Ukraine nor the country’s international partners can afford to sit and wait for the Kremlin’s next moves. Instead, the Western world must now acknowledge the urgent need to strengthen Ukraine militarily. This means providing the country with the means to defend itself in ways that will significantly increase the cost of any potential escalation in Russian aggression. Failure to do so will only encourage the Kremlin to pursue military solutions, with potentially catastrophic consequences for European security.

Russia currently menaces Ukraine from the north, east, and south. The southern front is particularly vulnerable, given the hundreds of kilometers of coastline that Ukraine must defend and the heavy concentration of Russian military power in occupied Crimea.

Since the Russian seizure of Crimea in spring 2014, Moscow has dramatically increased its military presence on the peninsula. More recently, it has also bolstered its naval strength in the surrounding Black Sea region with the addition of ships transferred from Russia’s Caspian, Baltic, and Northern fleets.

The Kremlin has easily identifiable military objectives in southern Ukraine. It is well known that Crimea is suffering from a mounting water crisis that has led to the rapid deterioration of agriculture on the peninsula and daily water rationing for Crimean residents. This is hugely embarrassing for the Kremlin. Moscow blames the current water shortages on Kyiv’s 2014 decision to block the North Crimean Canal, which previously linked the Dnipro River to Crimea and provided the peninsula with approximately 85% of its fresh water needs.

The Ukrainian authorities have stated that there will be no renewal of water supplies until the peninsula is liberated. With various Russian initiatives to end the water crisis proving ineffective, the prospect of a military operation to seize the North Crimean Canal has come to be seen as an increasingly realistic proposition. Many observers have speculated that any such action would likely be accompanied by a broader offensive to capture Ukraine’s entire southern coastline and cut the country off from access to the Black Sea.

Meanwhile, Moscow continues to control the two so-called separatist republics in eastern Ukraine. These Kremlin proxies boast powerful military forces led and equipped by Russia, and are supported by additional troop concentrations of conventional forces just across the border.

Along Ukraine’s northern border, Russia is currently strengthening its military presence in Belarus, where Kremlin-backed dictator Alyaksandr Lukashenka has recently dropped many of his earlier objections to the presence of Russian troops in his country.

The current military situation does not look promising for Ukraine, but it is far from hopeless. While the Ukrainian Army is comprehensively outnumbered and outgunned by the Russian Army, it enjoys a number of crucial advantages including priceless combat experience and the unparalleled motivation that comes from defending your homeland against international aggression.

Ukraine’s biggest problems include a reliance on outdated weapons and equipment. Much needs to be done in terms of improving domestic military procurement procedures and production capabilities. For example, it is no secret that Ukraine has failed to establish adequate ammunition production. There are many other areas where Ukraine’s military industrial complex has failed to meet the challenges of the seven-year war with Russia.

These issues must be addressed, but with tens of thousands of Russian troops concentrated at the border, the urgency of the current situation demands immediate action and rapid results. This can only be achieved with the help of Ukraine’s Western allies.

There is already broad agreement over the kinds of armaments Ukraine needs most. The country’s wish list includes coastal defenses and anti-ship missiles; anti-aircraft and missile defense systems; and enhanced anti-sniper and anti-tank technologies. Taken together, this armaments upgrade would allow the Ukrainian military to make any new Russian offensive prohibitively expensive in terms of both blood and treasure.

Ukraine is grateful for the strong support voiced by the country’s partners in recent weeks. However, we must also recognize the fact that statements of solidarity and expressions of grave concern are not enough to change Putin’s thinking. Only concrete defensive measures coordinated jointly by Ukraine and the West will succeed in getting his attention.

The language of strength is the only language Vladimir Putin understands. It is vital to make sure the Russian leader is under no illusions regarding the disastrous potential cost of any fresh offensive actions. This means arming Ukraine. Boosting Ukraine’s ability to defend itself is the best way to deter Russia and should be a strategic priority for the entire Western world.