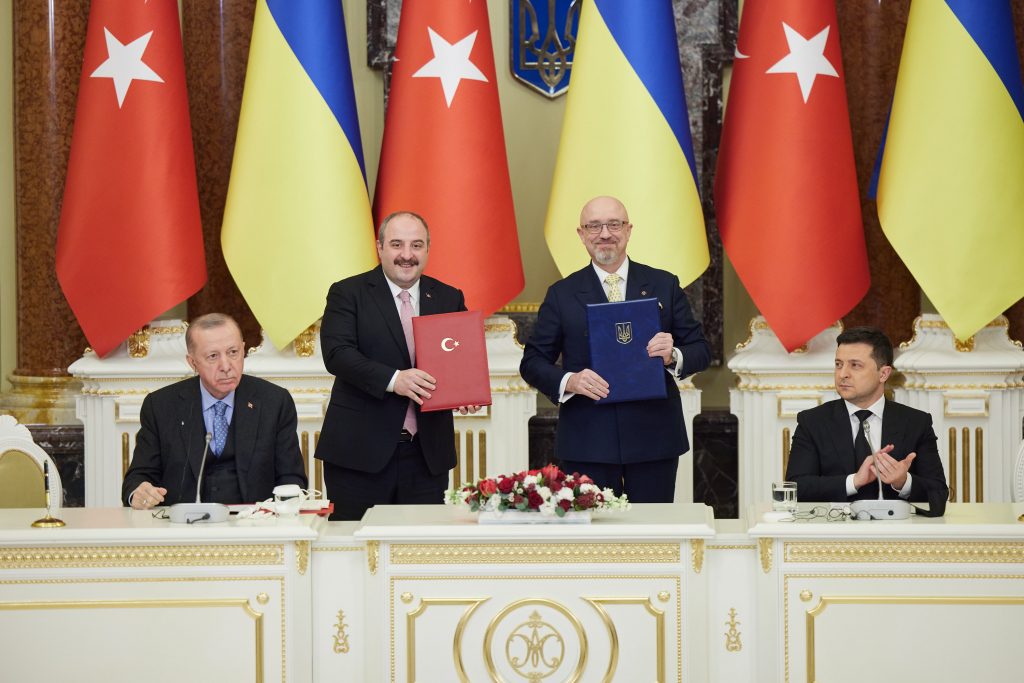 Ukraine welcomed Turkish President Recep Tayyip Erdogan to Kyiv in early February for a visit that underlined the deepening strategic partnership between the Black Sea nations.

Erdogan’s time in the Ukrainian capital proved highly productive, with officials from the two countries signing a range of bilateral documents including a long-awaited free trade agreement and a headline-grabbing defense sector deal paving the way for the joint production of Turkey’s highly rated armed drones in Ukraine.

Turkey and Ukraine’s new free trade agreement had been under negotiation for several years. Having finally been signed, it is now expected to provide an additional boost to what is already an expanding economic partnership.

Turkey has emerged over the past decade as one of Ukraine’s key business partners, with bilateral trade growing by almost 50% during the first nine months of 2021 to reach USD 5 billion. The Turkish and Ukrainian presidents have each expressed hopes that with the added advantages of the new free trade deal, annual bilateral trade volumes will increase to beyond USD 10 billion within the coming few years.

The strengthening relationship between Ukraine and Turkey goes far beyond economic cooperation. Ties have become more strategically important for both countries since 2014 and the onset of Russian aggression against Ukraine, with Kyiv and Ankara increasing cooperation in the defense sector and Turkey playing a prominent role in Ukrainian diplomatic initiatives such as the August 2021 Crimea Platform summit.

The Russian occupation of Crimea has provoked a particularly strong reaction from Turkey due to the country’s own long historical association with the Ukrainian peninsula, which was part of the Ottoman Empire for centuries. Today’s Turkey is also home to a multi-million strong community of Crimean Tatars. This has enabled Ukrainian and Turkish leaders to find common ground in denouncing widespread human rights abuses against the Crimean Tatar population in Russian-occupied Crimea.

At the same time, Turkey has sought to balance its support for Ukrainian territorial integrity with the need to avoid alienating Russia. During his recent Kyiv visit, Erdogan echoed popular Kremlin talking points by reiterating the importance of the 2015 Minsk Accords, while also offering to play mediator and host a new round of peace talks between Russia and Ukraine.

Erdogan is believed to have a complex but constructive personal relationship with Russian President Vladimir Putin that reflects the strong links and common ground connecting their two countries. Turkey depends heavily on Russian gas for its energy needs, while Russians regularly rank as the number one customers of Turkey’s economically important tourism industry.

Turkey and Russia are also geopolitical rivals who have frequently found themselves on opposing sides in recent years in conflict zones ranging from Syria and Libya to the southern Caucasus. Some observers believe Ukraine now has the potential to become the most bitterly contested battleground so far in the struggle between Moscow and Ankara for regional influence.

The defense sector cooperation agreement signed by Turkey and Ukraine in early February is the latest step in an intensifying security partnership. Since 2014, Turkish defense companies have begun to play an increasingly significant role in the modernization of the Ukrainian military, while Ukraine has provided Turkish partners with access to its considerable defense sector know-how including the country’s sophisticated aeronautical industry.

By far the most eye-catching aspect of this cooperation has been Ukraine’s acquisition of up to 20 of Turkey’s sought-after Bayraktar TB2 combat drones. When Kyiv first deployed one of its Turkish drones in October 2021 to destroy an artillery position in Russian-occupied eastern Ukraine, the incident was widely reported in the international media as a landmark event and a potential “game changer” in the simmering conflict.

Ukraine’s successful combat use of its Turkish drones provoked a chorus of protests from Moscow along with Russian accusations that the presence of these unmanned aerial vehicles risked destabilizing the region. The incident has subsequently been cited as one of the possible factors behind Putin’s current saber-rattling troop build-up on the Ukrainian border.

With many more Turkish drones now set to be constructed at a new Ukrainian production facility, it looks like the Kremlin will have to get used to the idea of Ukraine’s enhanced aerial capabilities. Speaking following the recent signing ceremony in Kyiv, Ukrainian President Volodymyr Zelenskyy hailed the agreement to begin manufacturing drones in Ukraine. “These are new technologies, new workplaces, and an increase in Ukraine’s ability to defend itself,” he commented.

Turkey’s economic and energy sector ties with Russia mean that there are limits to how far Ankara can go in its support for Kyiv. Nevertheless, the burgeoning Turkish-Ukrainian relationship is an important factor shaping the fast-evolving geopolitical balance in the wider Black Sea region.

Ukraine Crisis: Deterring Putin is expensive but much cheaper than war

Deterring Putin from launching a full-scale invasion of Ukraine is an expensive business, but it is infinitely cheaper than the price the international community will have to pay if Russia unleashes a major European war.