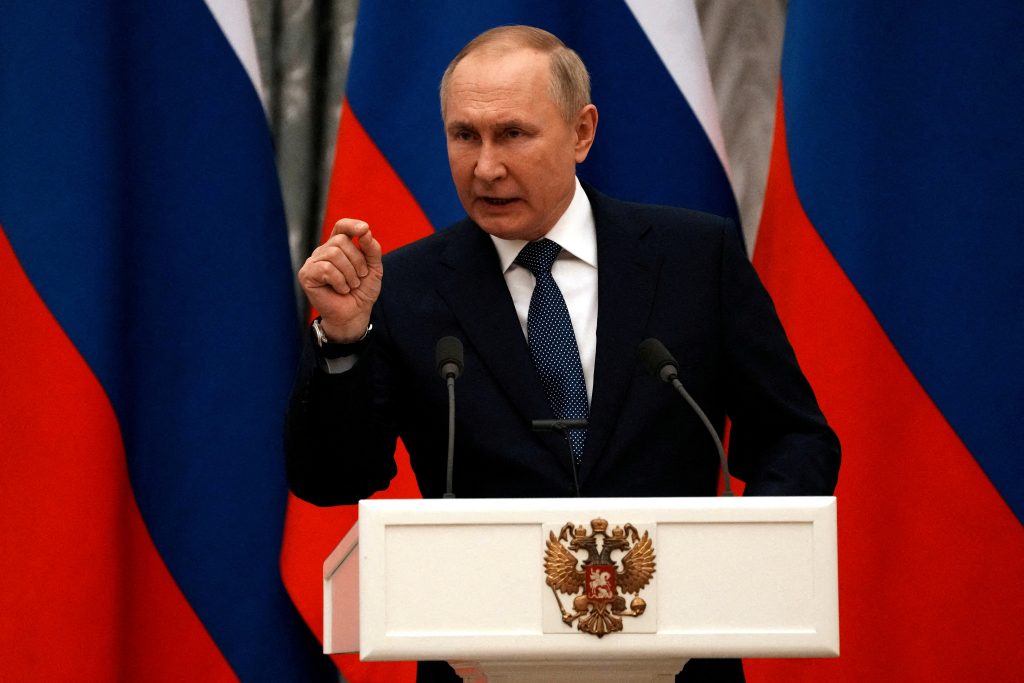 As the geopolitical crisis over Ukraine enters its fourth month, tensions are higher than ever. A series of top-level diplomatic initiatives in early 2022 have so far failed to produce a breakthrough, with Western leaders united in their rejection of Kremlin demands and Vladimir Putin unwilling to de-escalate a confrontation that he himself personally engineered.

Against this background of diplomatic deadlock, preparations for a new Russian military operation against Ukraine continue to gather pace. In other words, we may now be rapidly running out of time to prevent a catastrophic deterioration in the European security climate with potentially grave consequences for the wider world.

Many observers are currently focusing on the last week of February, which coincides with the end of the Winter Olympics in Beijing. More importantly, February 20 also marks the conclusion of joint Russian-Belarusian military exercises involving tens of thousands of Russian troops who are already conveniently positioned along Ukraine’s northern border.

With approximately 150,000 Russian soldiers now in place close to Ukraine, Moscow does not currently have sufficient forces available to occupy the entire country. However, there are a range of dangerous scenarios which remain far more likely. These include a local escalation in eastern Ukraine’s Donbas region, a potential advance on Kyiv from Belarus, or operations in the Black Sea and Sea of Azov.

When assessing the possibility of Russian military action, the international community must not underestimate the importance of Ukraine to the Kremlin. Indeed, many in Moscow view the current crisis in existential terms and believe Russia’s future hinges on the country’s ability to reassert its authority over Ukraine.

As his remarkable July 2021 treatise on the subject illustrated, Putin’s obsession with Ukraine appears to be growing more intense with each passing year. He knows that unless he can reverse Ukraine’s present Euro-Atlantic trajectory, his entire reign will be tarnished and his place in Russian history fatally compromised.

Ukraine’s transformation also creates alarming precedents for Russia itself. The consolidation of Ukrainian democracy and the country’s further European integration pose a direct and unambiguous challenge to Russia’s authoritarian system of government, while Ukraine’s strengthening statehood could potentially inspire a continuation of the imperial collapse that began in 1991.

From a Russian perspective, therefore, the stakes in the current confrontation could hardly be higher and a dramatic military escalation cannot be ruled out. Putin regards the loss of Ukraine as a potentially decisive setback for Russian national interests and is prepared to pay a very high price to prevent this from happening. To counter this, the West must convince the Kremlin that it is also willing to pay a far higher price than anticipated in order to defend Ukraine from attack.

The international response to Putin’s recent saber-rattling has so far focused on the threat of massive sanctions along with increased military support for Ukraine. These sensible policies must now be clarified and dramatically enhanced. There is still time to send the right messages to Moscow, particularly in terms of detailing the personal sanctions Putin and his inner circle can expect in the event of an invasion.

Above all else, deliveries of military equipment must be rapidly and significantly increased. While Ukraine has welcomed numerous plane loads of arms from the country’s partners in recent weeks, Russia’s unchanged posture suggests that the amount and type of weapons entering Ukraine has failed to deter Putin.

Rather than regarding this military aid as an expense, Western governments should view it as an investment. The return on this investment will be regional stability.

It is no secret that Putin’s domestic political situation is far from ideal. The prospect of a new war with Ukraine is not popular and large numbers of casualties returning from the Ukrainian front lines could conceivably destabilize the already fragile social fabric of the Russian Federation. This is perhaps the one thing Putin fears more than the loss of Ukraine.

We also know that the Ukrainians will fight. They demonstrated this will to defend their country in 2014 and recent surveys suggest Ukraine’s fighting spirit has only increased over the intervening eight years, with millions of Ukrainians expressing their readiness to actively resist a Russian invasion. Indeed, there is little to suggest Putin can expect a “small victorious war.”

If Ukraine receives the necessary weapons in far greater quantities, there is reason to believe the country can achieve a sufficient level of deterrence. Each successive shipment of anti-tank weapons arriving in Kyiv increases the likelihood that a Russian invasion will end in disaster. Russian military planners are well aware of this.

Weapons deliveries must now focus on areas that offer the greatest opportunities to inflict meaningful damage on Putin’s war machine. For instance, we know from past experience that the supply lines of any Russian invasion force will rely heavily on transport planes and helicopters, so the accelerated delivery of anti-aircraft missiles such as Stinger systems will have a significant deterrence value.

It is also known that the Russian military does not have an abundance of night vision googles, so an ability to see during long winter nights will make Ukrainian troops much more effective and dangerous. Likewise, Russian air superiority will be considerably less useful against an opponent operating in small and highly mobile groups, so secure communication devices should be a priority.

There has been understandable reluctance in many Western capitals to commit to the kind of hard line sanctions and military support necessary to make Putin think twice. Many appear to view the economic and political costs of these steps as being unacceptably high. However, such concerns must be measured against the infinitely higher costs that the international community will face if Russia proceeds with its threatened invasion.

In the event of a major war in Ukraine, the EU would have to deal with many millions of Ukrainian refugees whose presence would create social and economic challenges for years to come. The scale of this humanitarian crisis would likely dwarf anything Europe has witnessed since the aftermath of WWII.

The collapse of the European security system would necessitate a sharp rise in defense spending throughout the EU at the expense of other priorities such as healthcare, education, and social support programs. Countries close to the conflict zone including Poland and the Baltic states would be particularly hard hit.

International trade would be seriously disrupted, while Ukraine’s role as an emerging agricultural superpower would lead to damaging repercussions for countries around the world which currently rely on Ukrainian imports for their food security. Ukraine is the fourth largest agrifood exporter to the EU supplying 88% of Europe’s sunflower oil, 41% of rapeseed, and 26% of honey. The loss of this trade would be felt in a range of industries across the continent.

The West would also suffer an unprecedented loss of political capital over its collective failure to prevent the outbreak of a war in its own backyard that had been clearly signalled for months in advance. This would serve to undermine the basic principles of international law while fuelling greater insecurity around the globe. If Putin is allowed to proceed with his threatened invasion, the world will soon be a very different and far more unstable place.

It is always cheaper to prevent a disaster than to deal with its effects. This logic is particularly appropriate in the context of the current confrontation. Unless Putin is deterred now before it is too late, the costs facing the international community will grow exponentially. Ukraine is ready to fight if necessary, but the country’s partners would be wise to invest heavily in deterrence while they still have the chance to do so.

Ukrainian military planners along with their American and European colleagues already have enough data to calculate the possible troop numbers and equipment which would be utilised by Russia during military operations against Ukraine. This should allow them to determine the amount of equipment necessary to deter any such escalations.

Top US General Mark Milley recently warned that Kyiv could fall to Putin’s forces in just three days. If the international community arms Ukraine sufficiently, General Milley’s next briefing can focus instead on how international support for the Ukrainian military is undermining Russia’s invasion plans.

The scope of military assistance to Ukraine needs to match the scale and nature of the threat the country is now facing. This must happen urgently in order to create sufficient deterrence before and not after the onset of a new Russian invasion.

Andriy Zagorodnyuk is Chairman of the Centre of Defence Strategies and a Distinguished Fellow at the Atlantic Council. He previously served as Ukraine’s Minister of Defense (2019-2020).

While the world watches Ukraine’s land borders with Russia and Belarus for signs of Putin’s threatened full-scale invasion, Moscow may be in the process of opening a maritime front with a Black Sea blockade.