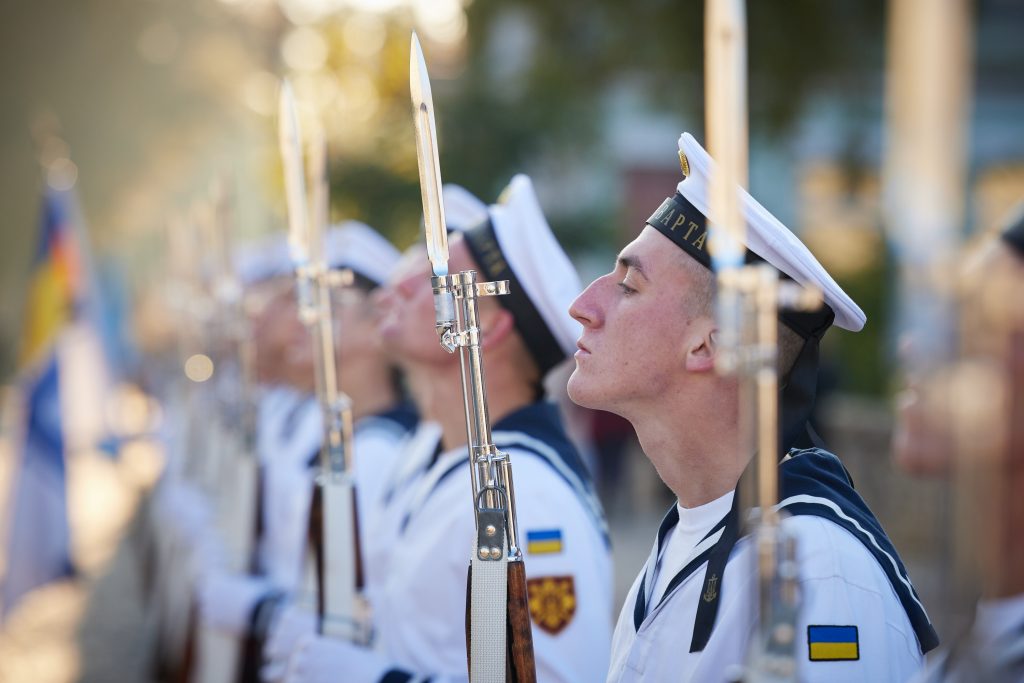 My appointment as Ukraine’s new Minister of Defense in early November coincided with a wave of mounting international concern over Russia’s latest military build-up along the Ukrainian border. This concentration of troops and armor is consistent with preparations for a large-scale invasion of Ukraine in the coming months.

As the international community began to raise the alarm over Russia’s menacing military activity, it was noted that Ukraine seemed to be reacting in a far calmer manner than many in the US or European capitals. This was an entirely accurate observation.

Ukraine’s reaction does not indicate any difference of opinion over the nature of the danger posed by the Russian forces concentrating close to the border. On the contrary, we are in complete agreement with our Western partners.

I have had the opportunity to confirm this via personal meetings with colleagues including British Secretary of State for Defence Ben Wallace and United States Secretary of Defense Lloyd Austin. Our intelligence agencies are on the same page and remain in constant contact. I have also spoken with my colleagues from Canada and Israel.

Ukraine’s comparatively calm response to this latest Russian threat reflects the long-term nature of the ongoing conflict between our two countries. It is now almost eight years since Russia first attacked Ukraine. Russian aggression has not stopped since, and has become part of everyday life.

We have become indifferent to the relentless flow of Kremlin disinformation and have grown accustomed to the Russian leadership’s attempts to deny Ukraine’s right to exist. It would take more than yet another Russian military build-up to shock us.

Nobody in Ukraine underestimates the seriousness of the present situation, but we have been forced to live with the possibility of a major escalation for many years. Ukrainians know what we will do if confronted by the worst-case scenario of a full-scale Russian invasion. We will fight. We will defend our land.

It is no longer 2014 anymore, when many Ukrainians had trouble psychologically accepting the stunning reality that we were under military attack from “brother Russia.” Today, the Ukrainian army is one of the strongest ground forces in Europe with more than 400,000 combat veterans. We have the resources and the resolve to stand up to the enemy. And Russia knows it.

The only real uncertainty is whether Europe fully appreciates what a full-scale Russian invasion of Ukraine would mean for the rest of the continent.

In addition to its nuclear arsenal, Russia also easily outguns Ukraine in terms of military aviation, rocket systems, and naval strength. Russian missiles can cause devastating damage to Ukrainian towns and cities, while Russian airborne and marine forces can outmaneuver Ukrainian troops and seize territory.

Nevertheless, any large-scale land campaign against Ukraine is ultimately doomed to fail. Russia’s powerful military can certainly advance in force, but Russian troops will not be able to hold any territory they take. Instead, occupied Ukrainian land will burn beneath their feet.

The human cost for Ukraine would be catastrophic, but Ukrainians would not mourn alone. Russia would also suffer massive losses. Images of coffins returning to Russia from the front lines in Ukraine would spread like a virus across social media and would soon prove too much for even the Kremlin censors to contain.

A major war in Ukraine would plunge the whole of Europe into crisis. The sudden appearance of between three and five million Ukrainian refugees fleeing the Russian invasion would be just one of many major concerns facing European society.

For example, the EU relies heavily on food imports including grain. A major war would seriously disrupt and possibly prevent entirely many imports from both Ukraine and Russia, creating a whole range of food security problems for the entire continent.

Russia’s attack would also mark a definitive end to the rules-based international order, opening the door to a new era of global insecurity that would threaten decades of unprecedented peace throughout most of Europe.

While I have emphasized Russia’s readiness to raise the stakes, it is also vital to note that the Putin regime is nothing if not pragmatic. They are highly skilled at assessing risks. While an escalation is currently possible, it is still avoidable.

The only realistic way to deal with the Kremlin is by demonstrating a readiness to stand up to Russian aggression. We must convince Moscow that the price of a new offensive would be too high to contemplate. This price would be in purely military terms and in the form of negative political, economic, and social repercussions.

Failure to respond decisively to Russia’s latest threats will only raise the cost of containing the Kremlin.

In June, US President Joe Biden announced that he would be watching Moscow’s actions closely during the next six months. Since then, the Kremlin has effectively completed the Anschluss of Belarus, mounted a hybrid attack against NATO and EU member states by funneling migrants towards their borders, and blatantly weaponized energy supplies, which, coincidentally, Western leaders had pledged to prevent. Russia is now conducting a fresh military build-up on the Ukrainian border.

If the response to these actions is limited to expressions of concern and calls for a new round of talks, Russia will regard this as an invitation for further aggression.

Some in the West continue to believe that everything must be done to avoid provoking Russia. They fail to appreciate that the Kremlin views the very existence of NATO and the European Union as provocations. Indeed, the entire notion of an independent Ukraine is an intolerable provocation for many in Moscow.

If the democratic world wishes to avoid the disastrous consequences of a major war in Ukraine, Western leaders must demonstrate their resolve to resist Russian pressure while strengthening Ukraine. For our part, we are committed to defending Europe while building for the future.

As Ukraine’s new Defense Minister, I have set myself the goal of transforming the Ministry of Defense into an efficient civil institution that implements policies in the defense sphere while assuming administrative leadership of the Armed Forces of Ukraine. The Ministry should ensure that our soldiers have everything they need to defend the state, while also exercising democratic civil control.

Together with my team, we have prepared the outline of our agenda for 2022. We will announce the first components on December 6 as the country marks the thirtieth anniversary of Ukraine’s Armed Forces.

Our priorities include increased transparency in defense acquisition, digital transformation, and the introduction of ERP models to increase the effectiveness of the defense sector. Personnel reform based on NATO practices is another important initiative. I aim to transform the Ministry of Defense into one of Ukraine’s most effective institutions and to make the Armed Forces the country’s best employer.

I will also place a strong focus on military diplomacy to ensure synergy with our international partners. We are unwavering in our course towards Euro-Atlantic integration. We will focus on further integration with NATO by increasing joint projects and ensuring mutual compatibility.

With the threat of a full-scale Russian invasion looming over Ukraine, it is now up to the democratic world to act before it is too late. Western leaders still have time to deter Russia and demonstrate that Ukraine does not stand alone.

At stake is much more than the fate of an independent Ukraine. If Russia’s threatened attack goes ahead, it will create chaos across the continent and shatter the relative stability that most Europeans have grown accustomed to since the end of the Cold War. In its place will be a new normal of insecurity and aggression fueled by the Kremlin. The future of Europe itself is at stake, and it will be decided in Ukraine.