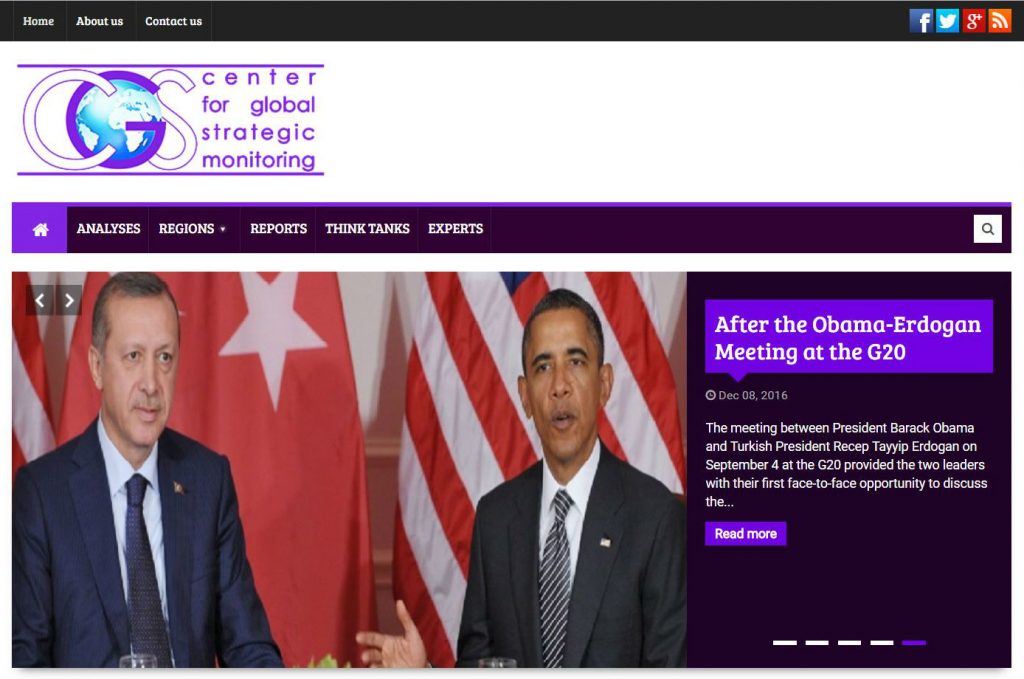 A few weeks ago, a colleague asked why I was a part of an organization called the Center for Global Strategic Monitoring (also known as the CGS Monitor). Despite working in foreign policy for seventeen years, I had never heard of this organization. Imagine my surprise when I discovered my photograph and biography listed on the CGS Monitor website as one of their “experts.”

I immediately began searching the website for contact information to request that my name be removed. However, it became clear that there was something fishy about this website. Not only was no mailing address given; the only email contact to be found was a ubiquitous “[email protected]” address. My email requesting that my name be removed has never been answered and the website continues to list me as one of their experts.

As a political consultant in Kyiv and a senior non-resident fellow at the Atlantic Council, I follow politics in Eastern Europe closely. I also maintain a blog on Ukrainian politics and provide political risk analysis for personal clients. Over the last three years, I have witnessed the massive Russian propaganda campaign against Ukraine, and have seen firsthand the effects of the war in eastern Ukraine. Like everyone else, I have observed the recent “fake news” phenomenon. But the CGS Monitor website takes fake news and introduces a new element: “fake opinion.”

The Center for Global Strategic Monitoring website appears to be an impressive and thoughtful news and opinion site at first glance. However, one does not have to dig deep to discover that the organization is phony. Here’s how they do it: First, the website re-publishes analysis and opinion pieces from real, respectable research institutions (apparently without permission). Then these legitimate pieces are mixed with “news” from Russian-controlled sources without attribution. Worse yet, the website even posts some fake articles under the names of distinguished think tank scholars. As a result, the website contains an assortment of good analysis from actual think tanks, pseudo intellectual drivel produced by propaganda outlets and conspiracy theorists, and fake opinion pieces camouflaged as the handiwork of foreign policy experts.

When it comes to European affairs, CGS Monitor clearly prefers articles from the Atlantic Council and the National Interest. It even included articles critical of Russia, like this one that Alexei Sobchenko wrote for the Atlantic Council in October, “Kremlin Panics after Dutch Report, and It Should.” Another article critical of Russia is this one from September 2015 titled “Kremlin Uses Minsk Protocol to Undermine Ukraine Government,” by my colleague Alina Polyakova.

However, it also mixes in pure Russian propaganda without indicating the source, as with this article, which was taken directly from RT, the Kremlin’s primary English language propaganda outlet. The article portrays the US’s long-expected force increase in Europe as Obama’s retribution for Russian hacking. It may be a Russian attempt to pit the Trump administration against NATO by portraying Obama’s moves to strengthen NATO against Russia as politicized. Or take this article, in Spanish, lifted from the Spanish-language version of Sputnik News, an official Russian propaganda outlet. This time, CGS Monitor had the courtesy to include the author’s name, but not the fact that it is obvious state-sponsored propaganda.

In addition, the website includes articles by a notorious conspiracy-theory website, the Center for Research on Globalization, which features articles like “Were ‘CIA Dirty Hands’ Behind Assassination of Russia’s Ambassador to Turkey?” (the CGS Monitor version is here). This website specializes in alarmist conspiracy theories of all kinds, like this article, “Quotes That Can be Used to Resist Donald Trump’s ‘Oval Office Tyranny’ in 2017,” or this article, which intimates that there is a shadowy “deep state” plot to use the US intelligence community and Ukrainian nationalists to undermine Trump’s administration. (The CGS Monitor versions are here and here.)

However, the most nefarious articles on the CGS Monitor site are the fake opinion pieces. A prime example is the article “American Victims of Terror Demand Justice.” CGS Monitor claims the piece was written by the noted Middle East analyst Bruce Riedel of the Brookings Institute; however, when asked about it, Riedel confirmed that he did not write the article, which is an attack on the US-Saudi Arabia alliance. Who would benefit the most from damage to that alliance? Russia. Russia’s main competitor on the energy market is Saudi Arabia and other Middle Eastern countries; a breakdown in the US-Saudi relationship would lead to chaos in the Middle East, resulting in higher prices for oil and natural gas. The article also alleges that the Saudi government was behind 9/11, and says that there has been a conspiracy to cover this up.

What is also evident is that this article is was not written by a native English speaker. The improper placement of nouns and frequent lack of articles like “a” and “the” strongly suggests that it was translated into English by a native Russian speaker. Anyone who has lived in the former Soviet Union recognizes that Russian speakers have difficulty knowing when and where to use English articles. Take these excerpts from the article, for example: “It is a shameful matter to support a regime in which women are not allowed to drive, and criminals are being beheaded like Middle Ages.” Or “…why the authorities are insisting on having relations with Saudis?”

Strategically, CGS Monitor re-posted a few articles that were actually written by Bruce Reidel. Thus, there is enough real content from Reidel that an occasional fake opinion piece can go undetected and is assumed to be real. CGS Monitor’s use of such deception techniques would not fool a regional expert, but it might fool someone doing research or editing Wikipedia, as in this example.

However, that’s not the only fake article. This article, “Why Should We Cover Saudi Crimes,” was not, in fact, written by Jacob Olidort. And these articles, “Consequences of the Rift Between Saudi Arabia and Iran” and “Saudi Ties to Sept. 11 Attacks,” were not written by Simon Henderson, a respected scholar of Gulf politics.

Another technique used by CGS Monitor is to mis-attribute articles rather than just make them up. This article, “Saudi Arabia, Is It Time for Arms Embargo?”, attributed to Bruce Riedel, was actually written by William D. Hartung, a left-leaning expert at the Center for International Policy, and ran on a foreign policy website under the title “More Arms to Saudi Arabia: More Mideast Conflicts.”

According to its Whois record, a database providing information about who owns websites, CGS Monitor was anonymously created in June 2015. Also, the site’s domain name, CGSmonitor.com, is very close to that of a well-known newspaper, the Christian Science Monitor, which is online at csmonitor.com, confusing readers.

The heavy reliance on Russian propaganda material, specific grammar mistakes, and main targets of the articles’ attacks strongly suggest Russians as the source of the website. Iranians also have motives, however, and could have their fingerprints on it as well. In fact, Iranians and Russians have been working closely together in Syria, and have collaborated against their common enemies (US and Saudi Arabia) since the late 1990s.

While fake news is the flavor of the month in DC, here in Eastern Europe it is nothing new. The CGS Monitor, however, has taken fake news to new depths with its use of fake opinions. How do we really know who said what? Academics, scholars, politicians, and writers must now vigilantly manage their brand as a core part of their work. Your opinion, it turns out, may no longer actually be yours.

Brian Mefford is a senior non-resident fellow at the Eurasia Center of the Atlantic Council. He has lived and worked in Kyiv since 1999.

Image: A screenshot of the Center for Strategic Global Monitoring.