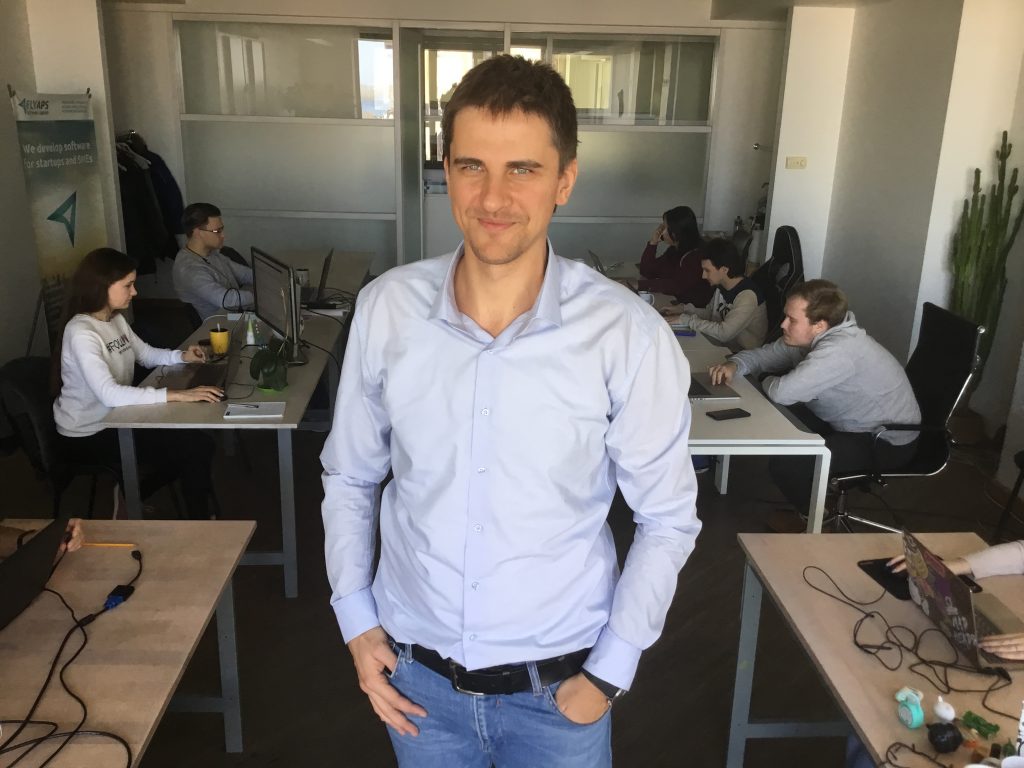 Google Ukraine’s CEO sees great growth ahead for Ukraine’s booming tech sector, but says this potential is being diminished because software companies still tend to leave the country in search of more favorable conditions in the West.

“Ukraine grows faster than many countries in Eastern Europe,” Google’s County Director Dmytro Sholomko, 43, recently told the Kyiv Post. However, he also notes that the market remains undersized and needs more small tech companies that are willing and able to stay in the country.

“There is a rule here,” Sholomko says. “If you want to become a ‘unicorn’ or just a big company, you will have to move (abroad).” A unicorn is a startup valued at USD 1 billion. He cites Grammarly, founded by Ukrainians in Ukraine, but now headquartered in San Francisco.

Sholomko believes weak copyright laws, overbearing bureaucracy, and corruption are the key factors pushing tech companies to leave Ukraine and establish their legal entities in the US, EU or elsewhere.

While these opinions are uncontroversial, not all Ukrainian software companies seek to be unicorns, and not all IT workers want to leave Ukraine. At least half of the young tech professionals I polled earlier this year actually want to stay.

“I agree that if you want to become a unicorn you have to move. And the best place to move to is the US,” says Andrew Mukha, a young Ukrainian who is co-founder and CEO of Dnipro-based IT company Flyaps. The US is the biggest market in the world and the best place to find investors, while English is easier to learn than Chinese, Japanese, or German, he says. However, Mukha’s personal experience has taught him that the allure doesn’t always match the reality.

That experience is one reason why he chooses to stay in the rough-edged Ukrainian city of Dnipro, a six-hour train ride southeast of Kyiv. In the Soviet era Dnipro, then called Dnipropetrovsk, was a closed city and home to the USSR’s missile and rocket industry. Today’s Dnipro is a hub for Ukrainian IT companies working in the outsourcing or “off-shore” market.

Off-shore companies do contract work including software development, games and other apps, automation, accounting, customer service, and website design for mostly US and EU companies, saving their clients the cost of doing it in-house. The price is low by Western standards, but the salaries are high for Ukraine. The national average salary in Ukraine is currently around USD 350 to USD 450 a month. Junior software engineers can earn around USD 600 a month or more. Senior software engineers average USD 3000 to USD 4000 a month. It’s not unusual to meet Ukrainian senior developers in their 20s or early 30s.

Mukha started in rocket science before transitioning to IT. He studied rocket engineering at Dnipro National University. As a student, he worked in a local plant producing Satan intercontinental ballistic missiles, originally designed as a nuclear-armed weapon.

Mukha says he initially expected to continue working at the missile plant after university. But lingering Soviet-style inefficiency, low salaries, and lack of business savvy were “a nightmare,” he says. Instead, he chose to move into the growing IT market. It was new and dynamic, with salaries far higher than those on offer at the missile plant.

Mukha’s career trajectory is typical of Ukraine’s IT sector. In his third year of university, he began to study software engineering before landing a job as a software tester after graduation. In 2013, Mukha, whose nickname is “Fly”, and co-worker Alex Arhipenko, nicknamed “Aps”, founded Flyaps.

Mukha lived in New York for six months in 2018 and has many friends who have moved there. The practicalities of life in the US have not always lived up to their dreams, he says. “The people who want to live abroad are often going by what they see in movies and TV shows. They have never tried living in another country. They don’t know the pains that every foreigner experiences,” says Mukha. “You must start to build your life over again.”

Based on his own experience, Mukha says Ukrainians abroad tend to live in expat communities while working as hard as they would at home with just as little leisure time. “It is all the same as here, but with better roads,” he quips.

In my role as an English-language teacher to IT professionals in Dnipro, I polled 28 students in February 2020 on their career plans. Most were in their twenties or thirties and part of the demographic that is typically seen as most eager to leave Ukraine. However, the reality is less straightforward. I found that while they all want better lives, they are divided on whether to stay in Ukraine or go. And not all of those who want to leave plan to go permanently.

The young IT professionals I spoke to were more or less evenly split on whether to stay in Ukraine or leave the country. Around 40% said they want to move to an EU country or the US, while the same percentage said they would prefer to remain in Ukraine.

The other 18.5% were open to working abroad, but not on a long-term basis. As one student explained, “I don’t mind living abroad as an experience, but I want to remain connected to my country. I see my career and my business developing here. I want Ukraine to join the EU and stay away from Russia. This is the key for our future.”

Less than a quarter of this sample intend to stay in Dnipro itself, despite the convenience and economies the city is able to offer. For those who want to stay in Ukraine, this generally means moving to Kyiv and joining the largest IT cluster in the country.

My students in Dnipro expressed opinions that are often echoed throughout the Ukrainian IT sector. For many of the country’s IT professionals, the appeal of the EU is not merely a matter of higher salaries. Instead, they cite better living standards, greater protection of individual rights, and a more comfortable day-to-day environment among the key factors that attract them.

There is also considerable uneasiness within the Ukrainian IT industry over the legal status of employees. The IT sector has mushroomed over the past decade to become one of the engines driving the Ukrainian economy, but a significant percentage of Ukraine’s approximately 200,000 IT professionals operate as private entrepreneurs in order to benefit from preferential tax rates.

This approach is the subject of considerable ongoing public debate, with many industry insiders concerned that Ukrainian government efforts to regulate the sector could eventually undermine its success. At present, the industry is internationally competitive and able to offer generous packages to staff. The fear is that greater government involvement would lead to smothering bureaucracy and creeping corruption.

Brain drain clearly represents a significant challenge for the Ukrainian IT sector, but it is far from insurmountable. Many young IT professionals are attracted to the prospect of working abroad, but others see their futures in Ukraine. In order to prevent the loss of this emerging generation, the Ukrainian authorities must strive to match the social conditions on offer in the EU.

The IT industry itself is already on the right track and is currently able to provide both career opportunities and attractive salaries. The government’s main task is to bring the country’s growing army of IT professionals out of the legal shadows without slashing salaries via taxation or placing an incapacitating bureaucratic burden on the industry as a whole.

Ukraine’s IT sector is a major strategic asset and a national calling card that is fueling economic growth and transforming international perceptions of the country. The future of the sector now depends on creating a professional climate that will convince talented young Ukrainian IT professionals to stay.

Bill Brown currently teaches English in Kyiv at the Bill Brown Agency. He was previously managing editor of the Takoma Voice newspaper (2012-2016).