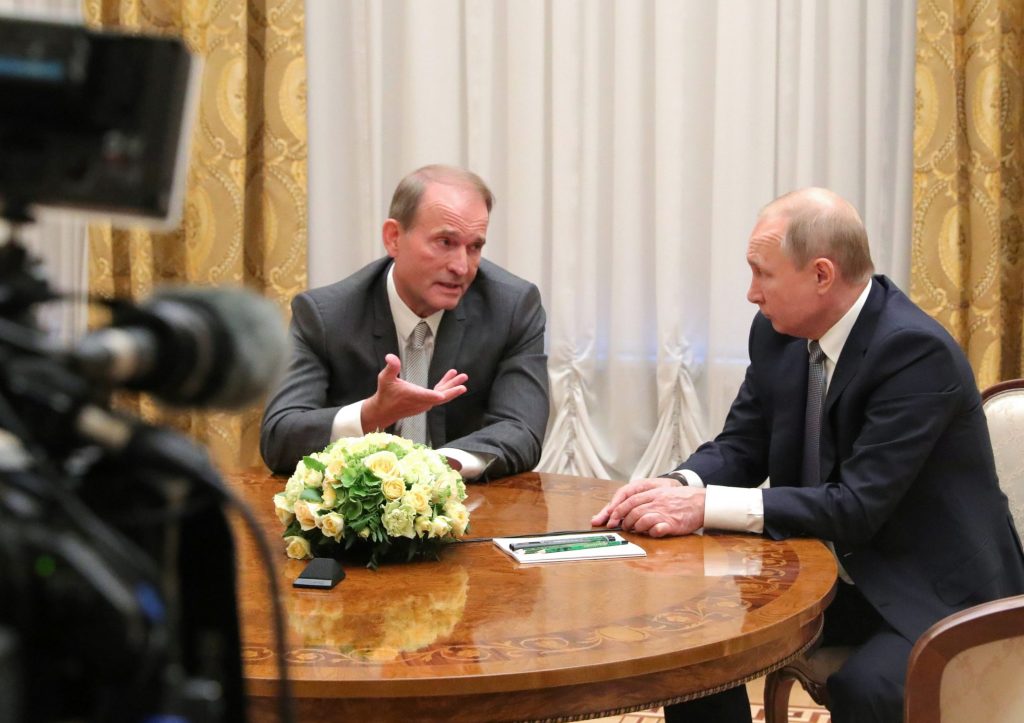 Vladimir Putin’s six-year military intervention in Ukraine has failed to reverse the country’s turn away from Russia, but the Kremlin leader is far from admitting defeat. On the contrary, his hybrid war against Ukraine remains at the heart of Russian foreign policy. Over the past year, Putin has rejected international calls for a compromise with Ukraine’s new president Volodymyr Zelenskyy. Instead, he has continued to publicly undermine Ukrainian statehood while signalling his readiness for a long-term geopolitical confrontation by fast-tracking the distribution of Russian passports to Ukrainian citizens in Russian-occupied eastern Ukraine. There are also indications of a mounting Russian offensive in the Ukrainian information sphere, with the Kremlin acquiring indirect control over key media outlets in a bid to turn the tide of Ukrainian public opinion back in Moscow’s favor.

In June 2020, journalists from the respected investigative Ukrainian TV show “Schemes” (a joint project by Radio Liberty and UA:First TV channel) reported that Vladimir Putin’s closest ally in Ukraine, the pro-Kremlin politician Viktor Medvedchuk, has a 24.66 percent stake in Ukraine’s most popular TV channel 1+1. This claim, based on company records and Medvedchuk’s own asset statements, suggests that Medvedchuk is even more influential in the Ukrainian media industry than previously thought. Over the past few years, he has reportedly built up a formidable Ukrainian media empire via purchases fronted by partners and proxies. Acquisitions have included the TV news channels NewsOne, 112, and ZIK.

This creeping occupation of Ukraine’s information space has not gone unnoticed. Speaking in May 2020, former Ukrainian prime minister Arseniy Yatseniuk complained that the country was in grave danger of losing control over the domestic information arena due to increasingly direct Russian influence. “Putin controls 50 percent of the news channels in Ukraine, so he can easily control 50 percent of the minds and hearts of Ukrainians,” commented the ex-PM.

Moscow’s efforts to build a Ukrainian media empire should come as no surprise. Putin has always placed great importance on control over the media. In the early days of his presidency, he moved quickly to muzzle Russia’s fledgling free press. Years later, during Russia’s 2014 offensives in Crimea and eastern Ukraine, Putin’s forces prioritized the seizure of broadcasting infrastructure and made sure Ukrainian TV channels were forced off the air.

Dominating the media environment in the rest of Ukraine has proven somewhat trickier. Since 2014, the Ukrainian authorities have banned the broadcast of Russian TV channels and placed restrictions on Russian-produced TV content. Meanwhile, the oligarch owners of Ukraine’s major media holdings have largely fallen in line with public patriotism and backed the country’s efforts to defend itself against Russian aggression. This has left the Kremlin with little choice but to acquire Ukrainian media assets of its own.

The choice of Medvedchuk to lead Russia’s media offensive hints at the significance of the undertaking. While there are still large numbers of influential pro-Kremlin figures in Ukrainian politics and business, none are as personally close to Putin as Medvedchuk. In 2017, the Financial Times wrote about the re-emergence of Medvedchuk from the shadows, claiming “Many suspect him of being Mr Putin’s agent.”

In his highly praised book “All the Kremlin’s Men. Inside the Court of Vladimir Putin”, author Mikhail Zygar goes even further, saying that Medvedchuk has long been “the main source of information about what was happening in Ukraine” and the only person Putin trusts in Ukraine. According to Zygar, Medvedchuk is “effectively Putin’s special representative in Ukraine”.

Medvedchuk first rose to national prominence in Ukraine during the 1990s as the leader of the United Social Democratic Party of Ukraine. Prior to his current role as Putin’s unofficial representative in Ukraine, the pinnacle of Medvedchuk’s political career had been his stint as chief of staff to Ukraine’s second president Leonid Kuchma. While in this position, he was accused of orchestrating media campaigns against Ukrainian opposition leader Viktor Yushchenko, who was depicted as a dangerous nationalist. Zygar believes that even then, Medvedchuk “shared some of the ‘Ukrainophobia’ of Moscow officialdom”.

Medvedchuk’s relationship with Putin dates back to his time in the Kuchma administration. The two initially met within the framework of bilateral dialogue and grew sufficiently close for Putin to become godfather to Medvedchuk’s daughter in 2004. As if to underline the Kremlin connection, the child’s godmother was Svetlana Medvedeva, the wife of Putin loyalist Dmitry Medvedev.

Following Ukraine’s pro-democracy 2004 Orange Revolution, Medvedchuk’s political fortunes declined. With his United Social Democratic Party of Ukraine increasingly eclipsed by the rising might of the Donetsk-based Party of Regions, Medvedchuk sought to reinvent himself as the leader of the “Ne Tak” party, which campaigned against Ukraine’s Euro-Atlantic integration. The expensive project failed to make an impression, attracting just 1% of votes in Ukraine’s 2006 parliamentary election.

Medvedchuk then spent a number of years out of the limelight before returning to the Ukrainian political fray in 2012 with the launch of the “Ukrainian Choice” movement. This new political initiative was designed to play a prominent role in the campaign against Ukraine’s plans to sign an association agreement with the EU. Instead of European integration, Medvedchuk lobbied for Ukraine to join the Moscow-led Eurasian Economic Union.

As part of this strategy, Putin and Russian Orthodox Church Patriarch Kirill were both invited to a summer 2013 conference in Kyiv that aimed to promote Ukraine’s embrace of “Orthodox values” and signal the country’s membership of the “Russian World”. Other noteworthy aspects of the campaign included homophobic posters equating European integration with same-sex marriage. Despite these efforts, President Yanukovych’s decision to back away from Ukraine’s planned EU association agreement sparked mass protests that escalated into the 2013-14 Euromaidan Revolution, resulting in Ukraine’s historic pivot towards the Western world.

During the early years of the undeclared Russo-Ukrainian War that erupted in the wake of the Euromaidan Revolution, Medvedchuk continued his political comeback by serving as the Kremlin’s preferred contact for negotiations on prisoner exchanges. In 2018, he confirmed his status as Ukraine’s most influential pro-Russian politician, taking on a leadership role as Chairperson of the Opposition Platform-For Life Party, which went on to secure a distant but credible second place in Ukraine’s July 2019 parliamentary election.

Medvedchuk’s latest political vehicle shares the Kremlin-friendly agenda of his earlier initiatives. The party benefits considerably from the favorable coverage provided by his expanding media empire, and has succeeded in eclipsing its Russophile rivals among the traditionally Moscow-leaning electorate in southern and eastern Ukraine. However, with a voter base heavily concentrated in the pensioner age group, it is unclear whether the Opposition Platform-For Life project has the potential for significant further growth.

This is part of a broader trend that does not bode well for the Kremlin. Support for pro-Russian parties has plummeted since the start of Russian aggression in 2014, with Medvedchuk and other Russophile political forces collectively winning less than 20 percent of the vote in Ukraine’s 2019 presidential and parliamentary elections. This is a far cry from the 40 percent to 50 percent share the country’s pro-Russian candidates routinely secured prior to the war.

The sharp decline in support for pro-Kremlin parties helps explain why Russia appears intent on securing a stronger position for itself on the Ukrainian media landscape. Media backing will be crucial as the Kremlin seeks to transform Ukrainian public opinion and undo the damage of the past six years.

There are already signs that the process is underway. In the current climate, it would make little sense for Ukrainian media outlets controlled by Moscow to flood the country’s information space with pro-Putin messaging. However, TV channels associated with Medvedchuk have played a prominent role in recent campaigns to discredit Ukraine’s reform agenda and promote a spate of anti-American narratives. This tallies closely with Kremlin efforts elsewhere to drive a wedge between Ukraine and the country’s Western partners while dampening domestic enthusiasm for Ukraine’s Euro-Atlantic trajectory.

What does Moscow really want?

For the last six years, Moscow has been pursuing a multidimensional destabilization campaign against Ukraine. What is the Kremlin’s foreign policy, and what does Moscow really want in Ukraine?

In his personal statements, Medvedchuk displays no such discretion and is entirely open about his pro-Kremlin position. Speaking to the BBC last summer, he admitted to feeling negatively towards the majority of Ukrainians who regard Russia as the aggressor. He has also repeatedly accused Ukraine’s leadership of “primitive Russophobia” and “anti-Russian hysteria.”

Will the Ukrainian government respond to looming threat of information occupation? Back in August 2019, President Zelenskyy raised the prospect of a major probe into the financing of Medvedchuk’s political party and media interests. “There are big questions about where they get money for their party and their television channels. We know about cash amounts, and we know which country it comes from. This will be a very big scandal and it will end very badly for them,” commented Zelenskyy. However, no further action was forthcoming. Likewise, Zelenskyy declined to intervene in spring 2020 when Medvedchuk led a delegation of Ukrainian MPs to Moscow.

With President Zelenskyy apparently unwilling to confront Medvedchuk, it looks like Putin’s favorite Ukrainian will continue to play the role of Moscow’s unofficial ambassador in Kyiv for some time to come. With a career stretching back three decades to the early years of independence, Medvedchuk is one of the great survivors in the treacherous world of Ukrainian politics. He has arguably never been more powerful than he is today. As well as occupying a prominent role in the country’s party politics, Medvedchuk’s expanding media portfolio makes him one of Ukraine’s key opinion shapers.

The national security implications of Medvedchuk’s rise are as ominous as they are obvious. At a time when Ukraine is struggling to defend itself against a seventh consecutive year of Russian aggression, it is hard to imagine anything more reckless than allowing Putin’s closest Ukrainian ally to assemble a media empire in the country. Ever since 2014, the information arena has been the decisive front in Russia’s hybrid war against Ukraine. In Medvedchuk, Moscow may finally have found the key to securing ultimate victory.