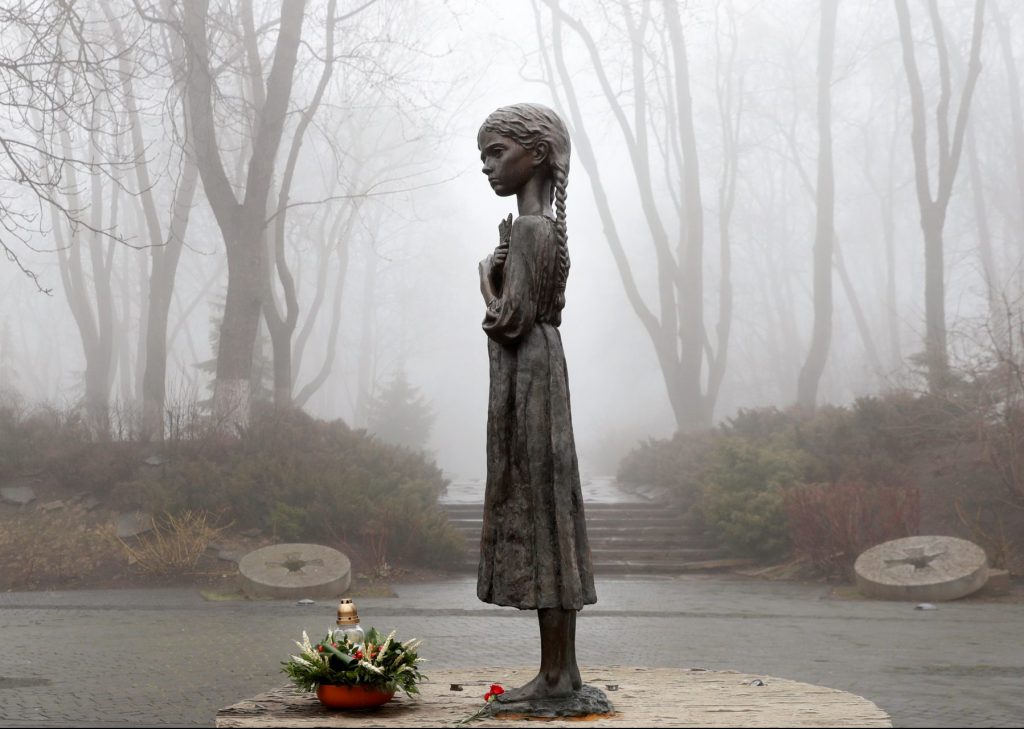 Kyiv City Council has confirmed plans to name a street in the Ukrainian capital “Gareth Jones Lane” in honor of the British journalist whose courageous reporting helped expose Stalin’s genocidal Ukraine famine. The July 31 decision by the Kyiv authorities reflects the important role played by Jones in the long quest to reveal the truth about the man-made 1930s famine, which killed an estimated four million Ukrainians and is known today as the Holodomor (“Death by Hunger”).

The appearance of a Kyiv street honoring Gareth Jones is arguably long overdue. In that sense, it is very much in keeping with the delays and denials that have marked the wider struggle for greater public awareness of the famine, both in Ukraine itself and internationally. Despite a staggering death toll, the Holodomor has never achieved the kind of international infamy associated with the most notorious atrocities of the totalitarian twentieth century. Instead, almost 100 years on, it is still the subject of heated political debate and remains partially shrouded in Soviet disinformation.

At the time of the famine, the Soviet authorities went to unprecedented lengths to prevent news from reaching international audiences. Gareth Jones was one of the very few international journalists to report on the mass starvation taking place in Soviet Ukraine. Having traveled to Moscow in March 1933, he took a train bound for Kharkiv in eastern Ukraine and surreptitiously disembarked close to the Ukraine border before continuing his journey on foot. The apocalyptic scenes Jones encountered as he made his way through the starving Ukrainian countryside would form the basis of his subsequent reports.

Jones may have beaten the Soviet censors, but his most implacable adversaries were actually his fellow reporters. Led by Pulitzer Prize-winning New York Times bureau chief Walter Duranty, the international press corps in Moscow closed ranks against Jones, refuting his claims and attacking his credibility. Prominent public figures including George Bernard Shaw and H. G. Wells joined the chorus of denials, as did the former French PM Édouard Herriot, who took part in a crudely stage-managed tour of Soviet Ukraine in summer 1933 and declared it to be “like a garden in full bloom.”

Fellow British journalist Malcolm Muggeridge, who was among the handful of correspondents other than Jones to write objectively about the famine, described it as “one of the most monstrous crimes in history, so terrible that people in the future will scarcely be able to believe it happened.” These chilling words were to prove prophetic. Thanks to the collaboration of Moscow correspondents and celebrity Soviet sympathizers, Stalin’s famine would go on to become the most successful disinformation campaign in modern history.

Throughout the Communist period, the Holodomor remained one of Soviet society’s greatest taboos. Accounts of the famine were passed down from generation to generation within individual families, but there was never any official recognition. Instead, the memory of the victims was kept alive by the global Ukrainian diaspora and the efforts of Western historians, most notably Robert Conquest and James Mace, who endeavored to document the scale of the tragedy.

Following the collapse of the Soviet Union, the campaign to commemorate the Holodomor finally began to gain momentum. The 2005-2010 presidency of Viktor Yushchenko witnessed a series of particularly significant breakthroughs in this process, including the Ukrainian parliament’s 2006 vote recognizing the famine as an act of genocide against the Ukrainian nation, and the 2008 opening of a National Holodomor Memorial on the Kyiv hills overlooking the Dnipro River. Yushchenko’s efforts to raise awareness of the Holodomor are widely viewed as one of the enduring achievements of his time as president.

International recognition has increased in parallel to the similar progess taking place within Ukraine. There are now a number of Holodomor monuments around the world, including the Holodomor Genocide Memorial in Washington DC, which was unveiled in 2015. Meanwhile, more than a dozen countries including the United States, Canada, Mexico, Portugal, and Poland have officially recognized the Holodomor as genocide.

Soviet apologists and supporters of the Putin regime no longer attempt to deny the existence of the famine. Instead, the contemporary debate centers around the classification of the Holodomor as an act of genocide. Critics argue that as millions of non-Ukrainians also died of starvation elsewhere in the Soviet Union during the same period of agricultural collectivization in the early 1930s, it is inaccurate to claim that Ukrainians were specifically targeted on the basis of their ethnicity. This ignores the wealth of evidence pointing specifically to genocide, including the closure of Ukraine’s borders, the disproportionately high death rate among Ukrainians, the focus on ethnic Ukrainian areas beyond the borders of Soviet Ukraine, and the parallel measures implemented against Ukrainian identity.

It is also crucial to keep in mind that the famine took place just over a decade after the Soviet authorities had crushed the independence bid launched by Ukraine in the wake of the Russian Revolution. As the former People’s Commissar for Nationalities, Stalin was acutely aware of Ukraine’s statehood aspirations and viewed Ukrainian national identity as one of the greatest threats to Soviet power. Tellingly, he made sure that many of the Ukrainian regions devastated by famine were subsequently resettled by large influxes of Russians, transforming the demographic landscape of the country in ways that continue to shape the political geography of today’s Ukraine.

Perhaps the most convincing argument for the Holodomor as genocide comes from Raphael Lemkin, the man who first coined the term “genocide” and drafted the United Nations Convention on Genocide. Speaking in 1953, this uniquely authoritative voice on the subject defined the famine as one of the chief steps in what he termed as the systematic destruction of the Ukrainian nation. “This is not simply a case of mass murder,” he commented. “It is a case of genocide, of destruction, not of individuals only, but of a culture and a nation."

The latest contribution to greater international understanding of the Holodomor is the recently released movie “Mr. Jones”. This groundbreaking historical drama revisits Gareth Jones’s experiences in the USSR in order to bring the horrors of the famine and the cynicism of the cover-up to modern global audiences. The team behind “Mr. Jones” was also involved the initiative to name a Kyiv street after the British journalist, penning a joint appeal to the municipal authorities together with the Ukrainian Institute of Journalism.

Kyiv City Council's decision to support the idea is significant. Ever since the dawn of Ukrainian independence in 1991, the renaming of the country’s streets has been a highly contentious process symbolizing the often troubled search for a post-Soviet national identity. The 2015 decommunization laws have proven particularly divisive in this regard, leading to the removal of familiar Soviet-era street names and the appearance of new street signs honoring some of the most controversial figures from Ukraine’s long independence struggle. However, as the Holodomor is one of the few historical issues that appears to unite a clear majority of Ukrainians, it is unlikely that many will question the wisdom of recognizing Jones in this way.

There is much more at stake here than belated justice for the victims of the famine. Indeed, the story of Gareth Jones and the Holodomor has a contemporary resonance that extends far beyond Ukraine. At a time when accusations of fake news often overshadow the news cycle and distort our understanding of reality, it has never been more important to study the great deceits of the past and recognize the deadly consequences of disinformation.

The fact that modern audiences are becoming increasingly aware of the Holodomor is an encouraging development that owes much to the bravery Gareth Jones. It is fitting that his efforts should finally be recognized with a street name in the capital of an independent Ukraine. It would be entirely appropriate if other cities around the world now also followed suit.

Peter Dickinson is the editor of the Atlantic Council’s UkraineAlert Blog.

Moscow has sought to justify the war in eastern Ukraine by claiming it historically belongs within the "Russian World", but this ignores the region's deep Ukrainian roots and cosmopolitan heritage.

Stalin’s man-made famine in 1930s Ukraine ranks as one of the worst crimes of the twentieth century but it remains relatively unknown. The new movie "Mr. Jones" seeks to counter decades of disinformation.

Image: A statue of a starving girl stands close to the entrance of Ukraine's National Holodomor Memorial Complex in Kyiv, which opened in 2008. REUTERS/Valentyn Ogirenko