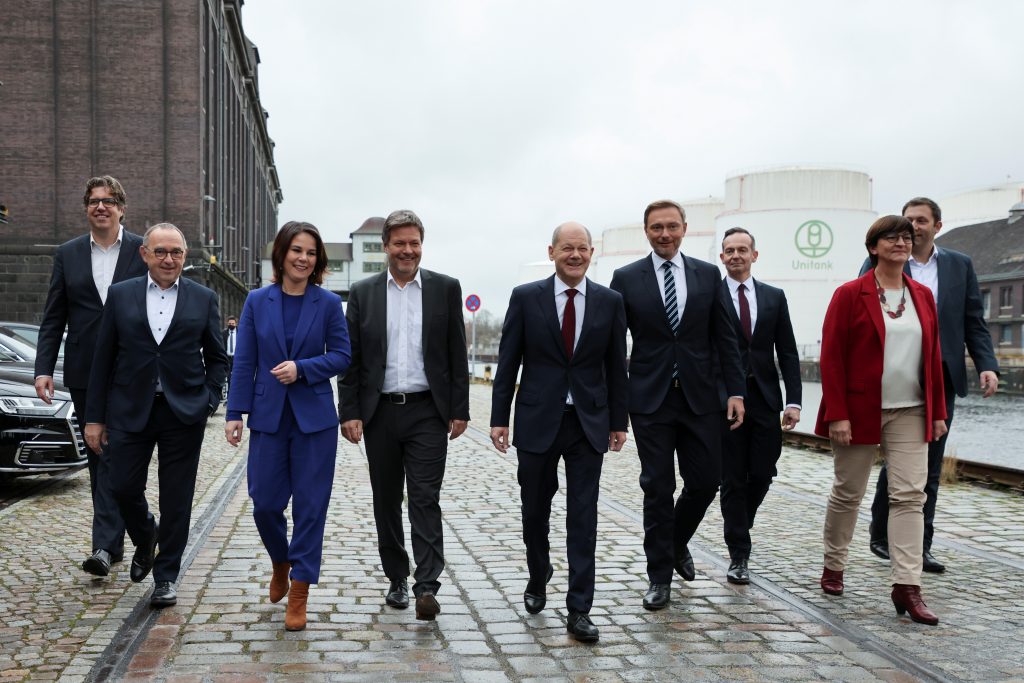 The sun is finally setting on Germany’s Merkel era and a new coalition government is poised to take over. What will this change mean for Germany’s foreign policy towards Russia and Ukraine? Berlin’s approach, if modified, will affect not only relations with Moscow and Kyiv, but also with other European partners, particularly in Eastern Europe, and also with the Biden Administration in Washington.

Much of the debate over the possible implications for German foreign policy of the new coalition is focusing on Greens co-leader Annalena Baerbock, who is set to become the country’s new foreign minister. Baerbock has called for a tougher stance towards Russia and has been vocal in her criticism of the Kremlin. Her position is a departure from the essentially soft line towards Moscow that was a hallmark of the previous German government.

In the run-up to Germany’s September 2021 parliamentary elections, Baerbock and the Greens were noticeably tougher towards Moscow and Beijing than their main political rivals. Meanwhile, Baerbock acknowledged earlier this year that Ukraine’s membership of NATO was still not realistic because of enduring divisions on this issue among alliance members, but has consistently expressed empathy and support for Ukraine.

Baerbock has previously called on Germany to scrap the Nord Stream 2 pipeline. She has dismissed the notion that it is a purely economic project, stressing that the pipeline aims to destabilize Ukraine. As she put it, “I went to Russia and talked to key actors. It was said openly the goal was about Ukraine and to circumvent sanctions.”

Predictably, there has been a negative initial response in Russia to Baerbock’s anticipated new role. On November 24, Russian news agency TASS quoted Russian Academy of Sciences researcher Vladislav Belov, whose critical appraisal of Baerbock’s appointment reflected the general mood of skepticism. “She is absolutely a bad fit,” he commented. “Bilateral dialog between Russia and Germany will unquestionably suffer. She is no diplomat, is ill versed in foreign policy, and hostile toward Russia.”

While many in Moscow acknowledge that Baerbock represents a break from what they accustomed to in bilateral relations with Germany, will Berlin genuinely change its tune?

The German Social Democrats, or SPD, known for their constant emphasis on maintaining a close relationship with Moscow, won the most votes in the German election. The Greens, far more critical of Moscow, have been the kingmaker in forging a viable coalition but remain a junior partner.

How things will now go is uncertain. Much will depend on developments in the next few weeks until the new coalition enters office in mid-December. Key issues include the situation on the Ukrainian and Belarusian borders, the Kremlin’s actions, and the responses from Washington and Brussels.

Berlin’s behavior during the last weeks of the Merkel era has given rise to heightened dismay in Kyiv and elsewhere in Eastern Europe. Merkel’s recent phone calls to Putin and Lukashenka, which took place without prior consultation with Berlin’s partners, have added insult to injury.

As former Estonian president Toomas Hendrik Ilves put it earlier this month, “The rest of Europe, at least in the EU’s east, is simply patronized, run over, and ignored,” by Berlin. In other words, there is a sense among many of the former Warsaw Pact countries that Germany has ceased to be a team player guided by European interests. For Kyiv and others, this is worrying.

The Nord Stream 2 issue remains at the center of Germany’s foreign policy debate. The outgoing Merkel government appears to be making a last ditch-effort to ensure that this controversial scheme survives despite strong opposition from Ukraine and its partners within and beyond Europe. The new coalition is biding its time and is remaining tactfully reticent on the subject.

TASS was quick to note that the published coalition agreement made no direct mention of Nord Stream 2 and avoided references to German dependence on Russian fossil energy. Instead, the document states simply that the new government wants to cooperate with Russia on hydrogen and climate protection while continuing to support Ukraine as before.

Nevertheless, there are some encouraging words for Kyiv, even if they sound familiar and await qualification. “We demand an immediate end to the attempts at destabilization against Ukraine, the violence in eastern Ukraine, and the illegal annexation of Crimea,” the coalition agreement reads. “The path to a peaceful solution to the conflict in eastern Ukraine and the lifting of the related sanctions depends on the full implementation of the Minsk agreements. We advocate resolving frozen conflicts in the region.”

How will this translate into Germany’s role in the Normandy Format of peace talks to resolve Russia’s military intervention in eastern Ukraine? In the absence of a more resolute German and, for that matter, French stance, Kyiv continues to signal that it is hoping Washington will add its weight and make a difference.

In recent days, Ukraine’s president, minister of foreign affairs, and Kyiv’s ambassador in Berlin have been busy trying to get Ukraine’s message across to the new government in Berlin and to the German public. Meanwhile, members of the outgoing Merkel administration have been lobbying Washington to let Nord Stream 2 happen.

Will German political and economic mercantilism prevail, or will the new coalition succeed in reestablishing Berlin’s role as a principled and trusted European leader?

Ukraine has requested a role in the German process to certify Nord Stream 2 amid fears in Kyiv that the pipeline could pave the wave for an escalation in ongoing Russian military aggression against Ukraine.