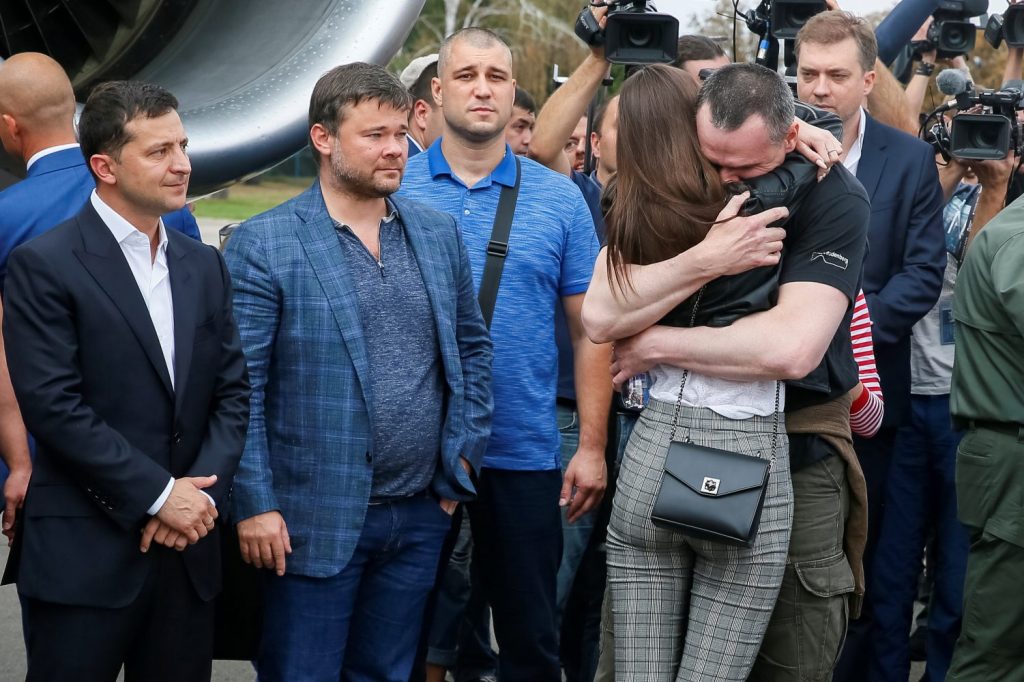 On Saturday, September 7, two aircraft simultaneously took off from Kyiv and Moscow toward each other like in a child’s math exercise. But this was not a game. Real planes carried real people. Thirty-five Ukrainians, political prisoners sentenced from 6 to 22.5 years in Russian prisons and prisoners of war, went in one direction. Thirty-five Russians detained in Ukraine on suspicion of crimes were on the other jet.

For the first time since December 2017, Russia and Ukraine exchanged prisoners.

Russian president Vladimir Putin’s first comment on the prisoner swap appeared on September 5. He said that negotiations were in the final stage, which signaled that the exchange would finally take place.

After the prisoner exchange failed on August 30, information leaked that the deal didn’t go through because Russia wanted to include a potential suspect and key witness in the downing of flight MH-17, when 298 citizens from ten countries were killed in 2014, on the list.

The price of the prisoner exchange was Volodymyr Tsemakh, who was captured by the Ukrainian Security Service during a special operation in the Russian-backed separatist controlled area of Donbas in late June. During the operation, Ukrainian reconnaissance operative Oleksandr Kolodyazhny, a cyborg who hung a Ukrainian flag over the terminal of Donetsk International Airport, was killed.

Tsemakh was eventually included on the list and sent to Moscow. Dutch prosecutors asked authorities in Kyiv not to extradite him to Russia until after they questioned him. About 40 MEPs wrote an open letter to the Ukrainian president making the same request. After the swap took place, Volodymyr Zelenskyy said that Tsemakh had been repeatedly questioned but he did not specify who did the questioning. Ukraine’s Prosecutor General’s Office classified information about the Tsemakh’s questioning but neither refuted nor confirmed the information that he was interrogated by Dutch investigators.

However, the inclusion of Tsemakh on the exchange list was very important for Ukraine. Zelenskyy’s domestic critics argued that Tsemakh should not be given up. Zelenskyy himself was silent in response. But with his position and quiet negotiations, Zelenskyy made the right call. Without Tsemakh, political prisoners and POWs would still be in Russia and the Kremlin could increase pressure on Ukraine in its inimitable style. With aggression.

Even if Tsemakh is an important person involved in the MH-17 case, there’s no guarantee that he would have told the truth or even talk at all. Suspects in horrific crimes are most often silent or try to justify themselves in court, as we witnessed during the International Criminal Tribunal for the Former Yugoslavia.

Nevertheless, investigators questioned Tsemakh. Ukrainian, Dutch, or maybe both. They got all the information they could. Plus, there’s no reason to believe that the trial in the case of MH-17 will ever be held. Dutch authorities believe Russia will cooperate, although Moscow shows no sign of consenting. Putin’s demand to include Tsemakh on the exchange list is another confirmation of the Kremlin’s intractable position.

The exchange reveals something else. For more than a hundred days of Zelenskyy’s presidency, his foreign policy strategy has been barely visible. And this makes sense. The political rookie is afraid to make a mistake that will be acutely perceived in Ukraine and could be regarded abroad as weakness, especially behind the Kremlin walls. Therefore, Zelenskyy and his team do not reveal all their cards. Instead, they are trying step by step to achieve their foreign policy goals.

At Boryspil airport, where the euphoria was palpable, Zelenskyy said that negotiations with Putin started on August 7. Without any high-level experience in negotiation, Zelenskyy managed within a month to agree with the man who has run the largest country in the world for 20 years. Zelenskyy was definitely successful. And this is his second victory since he took office. The first was the abolition of parliamentary immunity.

Zelenskyy’s diplomatic strategy will come into greater focus once his diplomatic team is finally fully staffed. The whole world watched his first steps in this direction today on the tarmac of the Boryspil airport, and this success may give the new president greater confidence as well.

Immediately after the returned Ukrainians reunited with their loved ones, Zelenskyy announced that the first stage in achieving peace in the Donbas is complete and that he and the team “know what to do next.”

But another question remains. How ready is the Kremlin, which still does not recognize its participation in the conflict, for a ceasefire in the Donbas? Eastern Ukraine is only one part of the conflict. There is also Crimea, where hundreds of thousands of Ukrainians have been actual hostages of the Kremlin for the last five years.