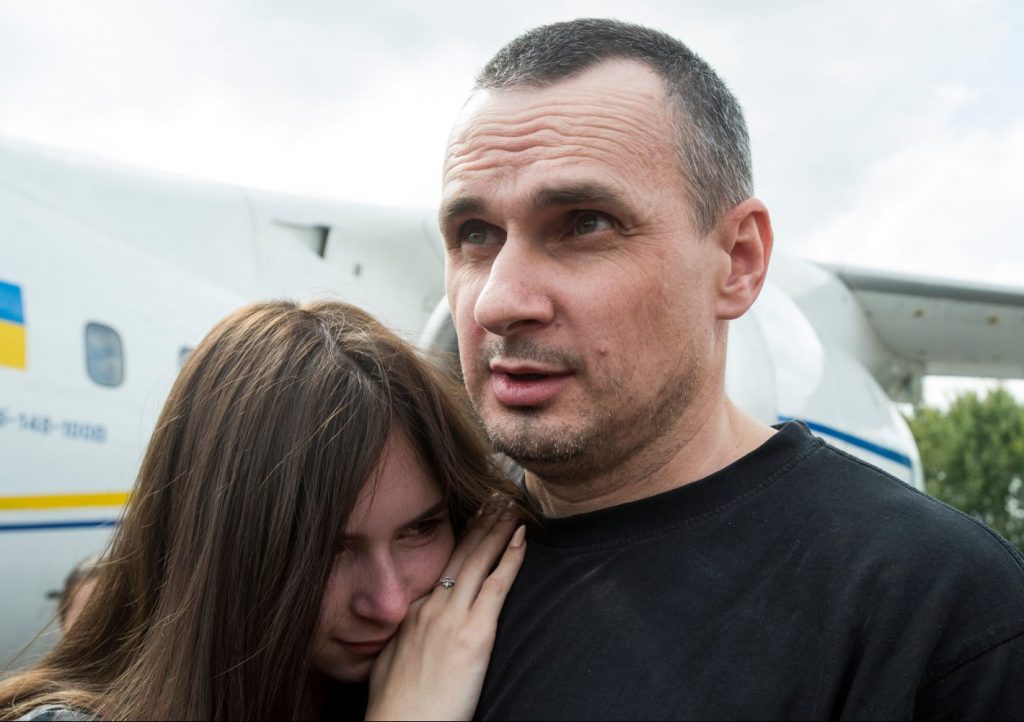 On September 7, Ukraine and Russia exchanged 35 prisoners in a long-awaited swap. Ukrainian President Volodymyr Zelenskyy called the move “the first step to end the war.” The exchange was praised widely by European leaders.

Who got the better deal? What might this signal about Russia’s willingness to finally negotiate and end the war? What does this mean for Zelenskyy? In what ways does the Kremlin benefit? What impact will this have on upcoming Normandy Format dialogue? How will the rest of the international community view this? Concession or negotiation?

Willem Aldershoff, former head of unit in the European Commission and international affairs analyst:It would be very difficult for any Ukrainian leader not to agree to this deal. So many important Ukrainian prisoners returning will play out very positively for Zelenskyy domestically and also benefit him internationally.

Russia definitively got the better deal out of it, however. First, they got Volodymyr Tsermakh, a potential key witness with inside information about the Russian BUK that downed MH-17 in 2014. Those who argue that Russia agreed to the whole exchange operation only because Tsermakh was their main target from the very beginning may well be right. Second, by agreeing to a prisoner exchange, Western ill-informed public opinion will get the impression of a “reasonable” and “cooperative” Russia. The risk is that even political leaders will think like that.

It’s important to recognize that the exchange is completely unbalanced: all Russian prisoners held by Ukraine were guilty of serious offenses according to the laws of any democratic, rule-of-law nation; all Ukrainians were only held as prisoners on the basis of scandalous and preposterous fake or trumped-up charges according to the same criteria. This point should be stressed more clearly in media reporting.

It is far from certain yet that the exchange will mean something positive for Russia’s approach to the war in the Donbas (and Crimea). Unless of course their adventure there is getting too costly to bear, about which we know still next to nothing.

The risk with the upcoming Normandy summit is that leaders like French President Emmanuel Macron and German Chancellor Angela Merkel, keen to make it a “success” and be less confrontational with Putin, will use this “new Russian flexibility” to pressure Zelenskyy to make “compromises” that are against Ukraine’s key interests.

Michael Bociurkiw, global affairs analyst: No matter what people may think of Zelenskyy, this is a major win for his new administration. It is also a very positive development that will be well received by a population made weary of more than five years of conflict.

The swap brings Ukraine one step closer to a re-opening of bilateral ties with the Russian Federation and hopefully closer to a settlement of the conflict in eastern Ukraine. It will create a more positive atmosphere for the Normandy Format peace summit proposed by French President Emmanuel Macron for later this month.

Why did Russia agree to the swap? They managed to obtain a key “person of interest” in the MH-17 investigation and show the world that they are capable of positive gestures. At the end of the day, Ukraine got more out of the swap than Russia: pretty much every high-profile Ukrainian political prisoner held by Russia was freed.

After successfully negotiating the prisoner swap and getting parliament to scrap immunity from prosecution for legislators, it is hard to imagine what Zelenskyy will pull off next. But one thing for sure, the past days have shown he is not the lightweight many people said he would be. Expect to see a boost to his already high popularity ratings.

Michael Carpenter, senior director at the Penn Biden Center and senior fellow at the Atlantic Council: First, obviously one has to feel happy for the Ukrainians who were wrongfully imprisoned in Russia, and also for their families. Some of these poor souls were shipped off to Siberia to rot in jail for decades, like Oleg Sentsov.

Second, Ukraine apparently tried to hold off exchanging Volodymyr Tsemakh, who commanded an air defense unit involved in shooting down MH-17. But Russia insisted on his inclusion, threatening to pull down the agreement if he wasn’t part of the deal.

So while I totally understand the frustration of the MH-17 victims’ families, I’m thrilled for the Ukrainian families who were reunited today with their loved ones. At the end of the day, we all know who was responsible for the downing of MH-17: Russia.

Fourth, I’d be very cautious about interpreting this as a step toward ending the war. August was one of the bloodiest months in the Donbas in a long time. More importantly, no country is incentivizing Putin to de-escalate.

Trump’s unliteral EDI reduction and his freeze on security assistance to Ukraine gives Putin exactly what he wants without a single concession by the Kremlin. That doesn’t bode well for a resolution. But—today is still a happy day.

Peter Dickinson, fellow at the Atlantic Council and publisher of Business Ukraine magazine: Securing the release of 35 Ukrainian prisoners is a major victory for Zelenskyy that will boost his domestic credibility and raise his international profile. At the same time, it will spark concern over the new Ukrainian leader’s apparent readiness to abandon the policy of international intermediaries and deal directly with the Kremlin. In particular, there is considerable disquiet among Ukraine’s partners over Kyiv’s decision to trade MH-17 suspect Volodymyr Tsemakh for Russia’s Ukrainian detainees, despite specific calls not to do so. Nevertheless, the prisoner exchange represents a breakthrough in the peace process following years of stalemate, and all parties will be eager to build on this momentum during the anticipated coming Normandy Format summit. With the overwhelming international desire being for some sort of resolution to the conflict, Zelenskyy’s willingness to compromise with the Kremlin will be both welcomed and encouraged. He must now seek to strike a balance between progress toward peace and a robust defense of Ukraine’s national interests. Ukrainians are tired of war, but they will not accept a Potemkin peace on Moscow’s terms.

John Herbst, director of the Eurasia Center at the Atlantic Council and former US Ambassador to Ukraine: The prisoner swap is a clear win for Zelenskyy and Ukraine, but it also has value for President Vladimir Putin.

The enthusiastic crowd that joined Zelenskyy at the airport to greet the returning prisoners makes clear that he scored big by delivering on his campaign promise.

While not a big victory for Putin, the prisoner exchange is still a positive. First, Ukraine sent to Moscow Volodymyr Tsemakh, the officer who helped return to Russia the Buk missile that shot down MH-17, the civilian airliner, in July 2014. The Dutch wanted to question him, which would have been problematic for Moscow. Second, Putin can point to the prisoner exchange as “proof” for his European partners that he wants peace.

Some overly enthusiastic voices are hailing this welcome prisoner exchange as a harbinger of the peace to come. That would be nice, but it is not time to pull out the champagne. There have been prisoner exchanges before. And a real peace will only come when Putin understands that he cannot compel Kyiv to do his will. That requires continued Ukrainian willingness to sacrifice in defending its territory and sovereignty, and continued strong Western support for Ukraine’s just fight.

Ukraine’s readiness to continue the fight is not in doubt. And contrasting the enthusiastic crowd greeting Ukraine’s returning prisoners with the silence attending the arrival of the Russian prisoners in Moscow reminds us that this is a Kremlin, not a Russian, war against the Ukrainian people. But regarding the second condition, why is the White House withholding the $250 million in military assistance that Congress voted, with the support of the senior US national security team, for Ukraine?

Adrian Karatnycky, senior fellow, Atlantic Council: The most important result is that 35 innocent Ukrainians have been released from unjustified captivity. This is a major achievement for Zelenskyy. But it is equally the fruit of Ukrainian and international efforts over the last few years. This exchange is the consequence Ukraine’s creation of a strong military, of the country’s fighting spirit, of the morale of Ukrainian forces, and of the long-term effects of strong international sanctions. All these have shown Putin there will be no surrender of sovereignty and have underscored the folly of his efforts to destroy the “artificial country” Ukraine. One can only hope that this reality will lead Putin on the path of peace. But only time will tell if tell if this is the harbinger of a broader understanding between Ukraine and Russia, or a one-off.

Alexander Vershbow, distinguished fellow, Atlantic Council and former US Ambassador to Russia: Both sides “won” in getting back 35 of their countrymen, but Ukrainians can claim a greater moral victory in that so many of its people who had been unjustly imprisoned were released, including political prisoner Oleg Sentsov and the 24 sailors from the Kerch Strait incident. But Ukraine had to pay a heavy price in giving back Volodymyr Tsemakh, a former Donbas commander implicated in the 2014 shoot-down of MH-17. Tsemakh, a Ukrainian citizen who had been only recently captured by Ukrainian special forces in a daring operation behind enemy lines, will now avoid testifying in Dutch courts, which could have undermined Russia’s disinformation campaign about the MH-17 affair. While the prisoner exchange has raised hopes for peace in Ukraine and in Western capitals, there is no indication Russia is any more ready for a genuine ceasefire or for implementing the Minsk accords on terms that Ukraine could accept. Putin may hope that Western praise for his “humanitarian gesture” will reduce the pressure on Moscow to end its undeclared war in the Donbas and place the onus on Zelenskyy to make all of the concessions. Now is the time for the US and its Allies to keep the spotlight on Russian aggression and show greater support for Zelenskyy, including unblocking US military assistance.