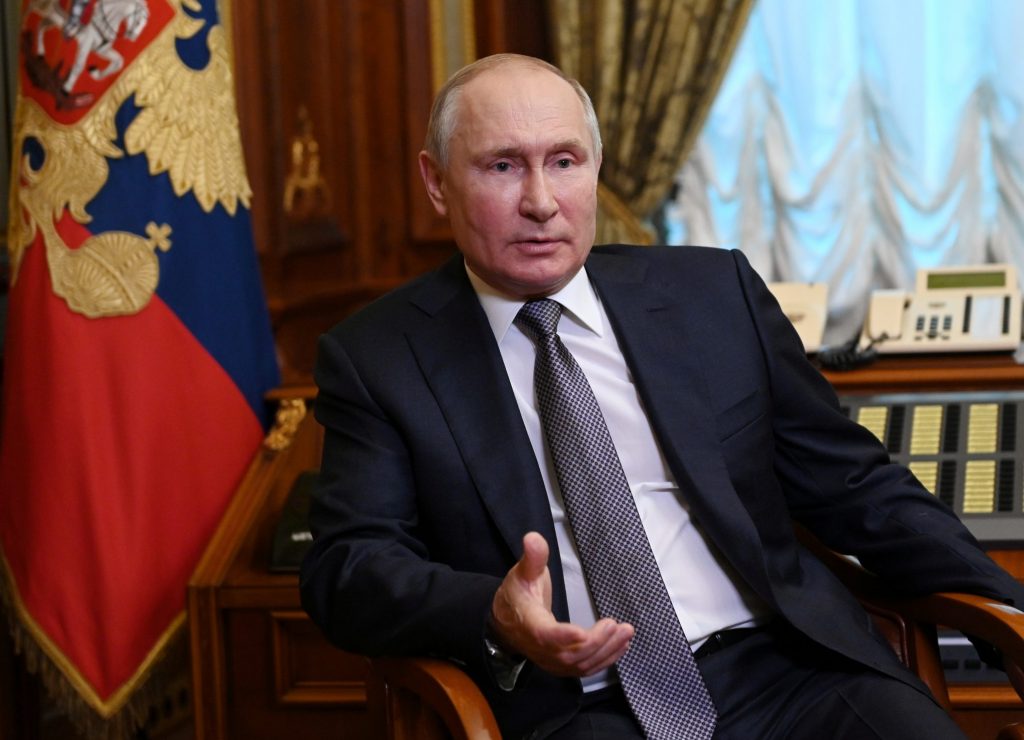 Russian President Vladimir Putin has outlined the historical basis for his claims against Ukraine in a controversial new essay that has been likened in some quarters to a declaration of war. The 5,000-word article, entitled “On the Historical Unity of Russians and Ukrainians,” was published on July 12 and features many of talking points favored by Putin throughout the past seven years of undeclared war between Russia and Ukraine.

The Russian leader uses the essay to reiterate his frequently voiced conviction that Russians and Ukrainians are “one people,” while blaming the current collapse in bilateral ties on foreign plots and anti-Russian conspiracies.

In one particularly ominous passage, he openly questions the legitimacy of Ukraine’s borders and argues that much of modern-day Ukraine occupies historically Russian lands, before stating matter of factly, “Russia was robbed.” Elsewhere, he hints at a fresh annexation of Ukrainian territory, claiming, “I am becoming more and more convinced of this: Kyiv simply does not need Donbas.”

Putin ends his lengthy treatise by appearing to suggest that Ukrainian statehood itself ultimately depends on Moscow’s consent, declaring, “I am confident that true sovereignty of Ukraine is possible only in partnership with Russia.”

Unsurprisingly, Putin’s article has sparked a lively discussion in Ukraine and beyond. Ukrainian President Volodymyr Zelenskyy initially responded by trolling his Russian counterpart and stating that Putin obviously has a lot of free time on his hands.

Nobody in Ukraine needs reminding of the grim context behind Putin’s treatise. Since spring 2014, Russia and Ukraine have been engaged in an armed conflict that has cost over 14,000 Ukrainian lives and left millions displaced. The Kremlin continues to occupy Ukraine’s Crimean peninsula and much of the industrial Donbas region in eastern Ukraine. Earlier this year, Moscow massed over 100,000 troops close to the border with Ukraine in what some military observers described as a dress rehearsal for a full-scale Russian offensive.

This week’s publication of Putin’s grievances in such a formal and high-profile manner has inevitably fueled speculation that the Kremlin could be preparing the ground for a major escalation in hostilities. As the debate continues, the Atlantic Council invited a selection of Ukrainian and international commentators to share their thoughts on what Putin’s article may mean for Russia’s future policy towards Ukraine.

Danylo Lubkivsky, Director, Kyiv Security Forum: Putin understands that Ukrainian statehood and the Ukrainian national idea pose a threat to Russian imperialism. He does not know how to solve this problem. Many in his inner circle are known to advocate the use of force, but for now, the Russian leader has no solutions. Instead, he has written an amateurish propaganda piece designed to provide followers of his “Russian World” ideology with talking points. However, his arguments are weak and simply repeat what anti-Ukrainian Russian chauvinists have been saying for decades. Putin’s essay is an expression of imperial agony.

Alexander Motyl, Professor of Political Science, Rutgers University-Newark: There is nothing in the article that hasn’t already been said in imperial, Soviet, or post-Soviet Russian historiography or propaganda. As the article says nothing new, it portends nothing new in Putin’s policy toward Ukraine. (With one possible exception: it doesn’t read like something someone planning a full-scale invasion would write.)

The only interesting questions are: why was it published now, and for whom was the piece written? Russians and Ukrainians have heard this before; Europeans and Americans would find the historical detail too abstruse. That leaves Ukrainian President Volodymyr Zelenskyy. Putin may have sought to offer the Ukrainian leader a timely reminder of Russia’s expectations during Zelenskyy’s visit to Germany and on the eve of his trip to the US. However, as with all of Putin’s policies toward Ukraine, this essay will also backfire. Ukrainians will resent being lectured about their identity, while Zelenskyy will take umbrage at being lumped together with the neo-Nazis who exist only in Putin’s imagination.

Brian Whitmore, Nonresident Senior Fellow, Atlantic Council: Vladimir Putin’s inaccurate and distorted claims are neither new nor surprising. They are just the latest example of gaslighting by the Kremlin leader. This, after all, is the man who famously told US President George W. Bush that Ukraine was not a real country during a widely reported exchange at the 2008 NATO summit in Bucharest. Putin’s claim that the “true sovereignty of Ukraine is possible only in partnership with Russia” is grotesquely disingenuous. For Ukraine, partnership with Russia has mainly meant subjugation by Russia.

Putin’s claim that Russia and Ukraine share “spiritual, human, and civilizational ties formed for centuries” disregards and downplays Ukraine’s historical connection to Europe, independent of Russia, as part of the Grand Duchy of Lithuania and the Polish-Lithuanian Commonwealth. The Russian leader’s essay reveals more about him than it does about Ukraine. It shows him to be a revanchist ruler who is prepared to construct false historical narratives to justify his imperial dreams.

Oleksiy Goncharenko, Ukrainian MP, European Solidarity party: Putin’s article claims to be about history, but in reality it is about the future and not the past. Ukraine holds the key to Putin’s dreams of restoring Russia’s great power status. He is painfully aware that without Ukraine, this will be impossible.

Putin’s essay does not actually contain anything new. Indeed, we have already heard these same arguments many times before. However, his article does help clarify that the current conflict is not about control over Crimea or eastern Ukraine’s Donbas region; it is a war for the whole of Ukraine. Putin makes it perfectly clear that his goal is to keep Ukraine firmly within the Russian sphere of influence and to prevent Ukraine’s Euro-Atlantic integration.

We should now expect to see some new trends emerging in the coming months. The Kremlin is likely to switch the emphasis towards “soft power” and indirect agents of influence. Moscow will focus on using people and platforms that do not appear to be overtly pro-Russian in order to spread the Kremlin’s key messages about Ukraine as a “failed state” that is under “Western control.” With this in mind, the Ukrainian authorities should intensify efforts to strengthen the country’s information security.

Yevhen Fedchenko, Chief Editor, StopFake: There is nothing new in Putin’s article. From year to year, he continues to deny the agency of Ukrainians while basing his arguments on an unapologetically neo-imperial vision of geopolitics. In his essay, Putin once again questions Ukraine’s right to exist and sends a thinly veiled threat that Ukraine will lose more territories if it positions itself as an “anti-Russia.” But territory is ultimately not the most important thing here. It is merely a bargaining chip. Putin wants to have the last word in determining Ukraine’s approach to history, culture, language, and identity. These are the decisive fronts in Russia’s war against Ukraine.

Brian Bonner, Chief Editor, Kyiv Post: This new essay underlines that Putin will never change. Nor is he exceptional. On the contrary, Putin’s condescending, imperialistic, and historically incorrect views about Ukraine are, unfortunately, shared by too many in Russia. This means Ukraine and the West will have to change and harden their own response in order to contain and isolate the Kremlin, which has nothing in common with the democratic, pluralistic nation that most Ukrainians want for themselves.

Taras Kuzio, Professor, National University of Kyiv-Mohyla Academy: Vladimir Putin has demonstrated once again that he does not really understand Ukraine and has never seriously studied Ukrainian opinion polls. His claim that “Russia did everything to halt the bloodshed” in Ukraine is both absurd and insulting. Ukrainians are only too aware of Russia’s ongoing military intervention in their country, much as they are conscious of the relentless anti-Ukrainian propaganda that has dominated the Kremlin-controlled Russian media for the past seven years. This essay also proves that Putin is still in denial over his personal responsibility for the collapse of bilateral ties between Russia and Ukraine. Instead, he continues to blame everything on anti-Russian conspiracies and foreign scheming.

If Western policymakers want to understand the causes of Europe’s only active war, they need to start taking Putin’s imperialism seriously. He has been espousing the same chauvinistic views on Ukraine since the 2000s and has repeatedly questioned the country’s historical legitimacy. This worldview is now conveniently presented in his latest essay, which leaves little room for doubt that he intends to continue fighting for control of Ukraine indefinitely.

Volodymyr Yermolenko, Chief Editor, UkraineWorld.org: Putin’s article shows that Russia will use history again and again in order to justify its political and military actions. Modern Russia remains an empire in essence. Before annexing new territories, the Kremlin seeks to annex history and assimilate its neighbors by denying their existence as separate national identities.

Putin’s current bid to promote assimilation in Ukraine is incredibly dangerous as it opens the way for a new wave of Russian expansion. Moscow is already increasingly absorbing Belarus, while claiming that this neighboring country is actually part of the same Russian nation. We should therefore expect to see a growing Russian emphasis on soft power efforts in Ukraine aimed at pushing assimilation through avenues such as religion and the media. Putin’s hybrid warfare tactics will become even smarter and more of a threat.