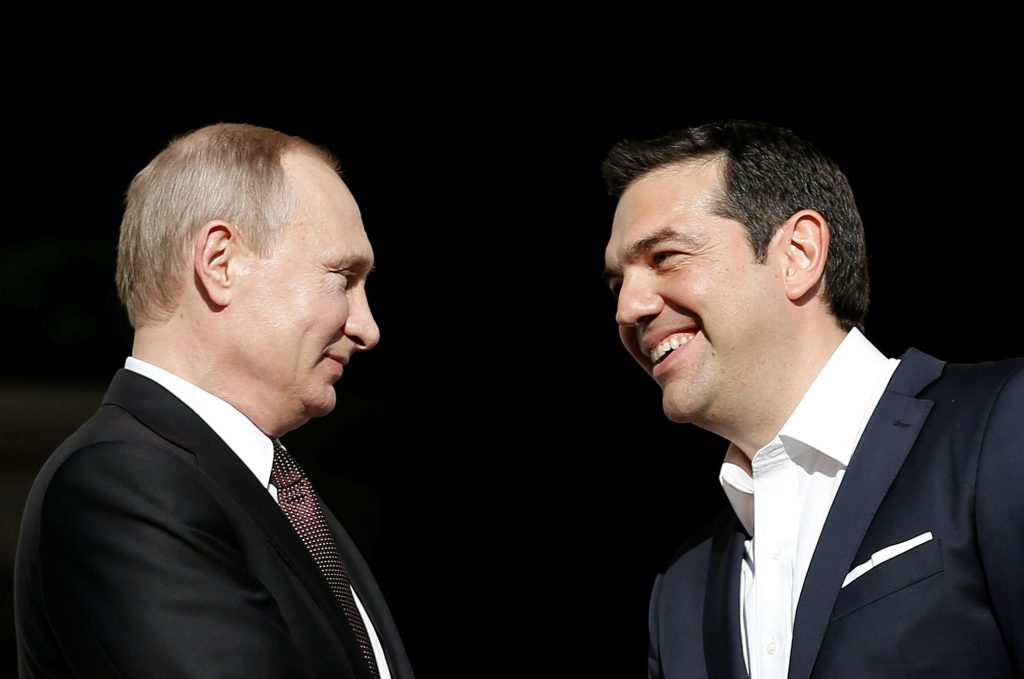 In November 2016, the Atlantic Council published the first volume of The Kremlin’s Trojan Horses, detailing the extent of Russian-linked political networks in France, Germany, and the United Kingdom. That report has since become a guide to those seeking to understand how the Kremlin cultivates political allies in Western European countries in order to undermine European consensus and sow divisions. In a new report, The Kremlin’s Trojan Horses 2.0, we trace the extent of Russian political penetration in Europe’s southern flank—Greece, Italy, and Spain.

These countries bore the brunt of Europe’s major crises in the last decade: the 2008 economic crisis and the 2015 refugee crisis. In the aftermath of the economic crisis, Greece, Italy, and Spain experienced double digit unemployment and income drops, coupled with reductions to social safety nets. The EU’s response was to impose austerity measures. And while these policies helped shore up the countries’ economies, they also bred domestic resentment against the EU, mainstream parties, and liberal democracy. Then Syrian refugees began arriving by the thousands on the Italian and Greek shores, further exacerbating social tensions.

It is this volatile climate that has proven to be fertile ground for Russian overtures, while providing an opening for political parties oriented toward the East.

The Kremlin has actively stepped into this opening by providing political and media support to pro-Russian forces, leveraging historical, religious, and cultural ties, and cultivating a network of pro-Moscow civil society organizations to promote Russia’s goal of weakening the EU and NATO.

The parties across southern Europe that have sought to align themselves with Russia differ in ideology and position, but they all advocate for Russian interests, vote against common EU foreign policies, and undermine establishment parties to engender chaos and instability. For these reasons, the Kremlin has worked strategically and actively to cultivate closer relations with Europe’s emerging insurgent parties on the left and the right.

Italy is most vulnerable to Russian influence. In the past few years, Russian President Vladimir Putin has become increasingly popular among the Italian public; he is widely perceived as a strong and effective leader, the only one capable of saving Europe from the threats of Islamist terrorism and mass illegal immigration. Putin is seen by many as an adversary of the West’s “globalist elites,” and therefore a potential ally in Italy’s efforts to regain its sovereignty.

Italy has two right-wing pro-Russian parties: the Northern League (LN) and the 5 Star Movement (M5S). Both receive political support from Moscow, as evidenced by meetings between their representatives and senior Russian government officials. They also receive media support, primarily in the form of visibility in Kremlin-controlled international media and on social networks. The LN even formalized its friendship with Moscow by signing a cooperation agreement with the United Russia party. However, there is no publicly available evidence that Moscow has provided financial support to these parties.

M5S poses a particular danger. In the fall of 2017, it was consistently polling as the most popular party in Italy. The party’s documented pro-Kremlin stance combined with its grassroots mobilization capacity make it an especially important ally for the Kremlin, and thus a dangerous force against the EU, NATO, and the transatlantic partnership. With Italy poised for elections in early 2018, an M5S win could dramatically shift Italian foreign policy away from EU cooperation, support for common defense, and continuation of economic sanctions against Russia.

Greece’s long-standing historical and religious connections to Russia through the Orthodox Church serve as the conduit for the Kremlin’s efforts to deepen its foothold in Greek politics. But Russia’s activities in Greece are not contained to diplomatic overtures. Russian oligarchs with close ties to the Kremlin have bought shares in Greek media; Russia’s state-owned gas giant, Gazprom, has consistently expressed interest in purchasing large stakes in Greek energy firms; and most notably, Putin has maintained a close relationship with the Greek leadership.

But Moscow is only willing to go so far in supporting its allies. In 2015, Greece was still reeling from the economic crisis, which almost led the country to default on its debt. Alexis Tsipras, newly elected as prime minister after his party Syriza’s win in the elections, was locked in difficult negotiations with the EU over additional bailout funds. Tsipras’s government had made better relations with Russia a top priority, and that spring, Tsipras traveled to Moscow to meet with Putin. While both countries denied that the purpose of Tsipras’s visit was to request financial support, the timing raised eyebrows. Tsipras walked away empty-handed, nonetheless.

Spain, unlike Italy and Greece, has not been a target of Russian influence. Still, Spain, as one of the largest EU countries and hub of the Spanish-speaking world, is relevant to Russian geopolitical interests. Russia’s growing Spanish language media outlet—RT Spanish—coupled with an emerging pro-Russian foreign policy in the leftist political party Podemos could make Spain the likely next target for the Kremlin. In this sense, Spain is at an inflection point: if Spanish policy makers take lessons from the experiences of other Western countries, they might be able to get ahead of the Kremlin. If not, Spain will likely face increasing Russian meddling.

Western democracies can become resilient in the face of Russian interference, but they are only as strong as their weakest link. Building societal resilience will require that policy makers, civil society, and the private sector come together to find short- and long-term solutions. Policy makers across the Atlantic must be aware of the depth and breadth of the Kremlin’s influence operations and to the threats these activities pose to transatlantic security. After all, the first step in the process is identifying vulnerable points within these societies.

Alina Polyakova is the David M. Rubenstein Fellow at the Brookings Institution’s Center on the United States and Europe. She tweets @apolyakova. She is a contributor to the Atlantic Council’s The Kremlin’s Trojan Horses 2.0 report, along with Markos Kounalakis, Antonis Klapsis, Luigi Sergio Germani, Jacopo Iacoboni, Francisco de Borja Lasheras, and Nicolás de Pedro, from which this article has been adapted.