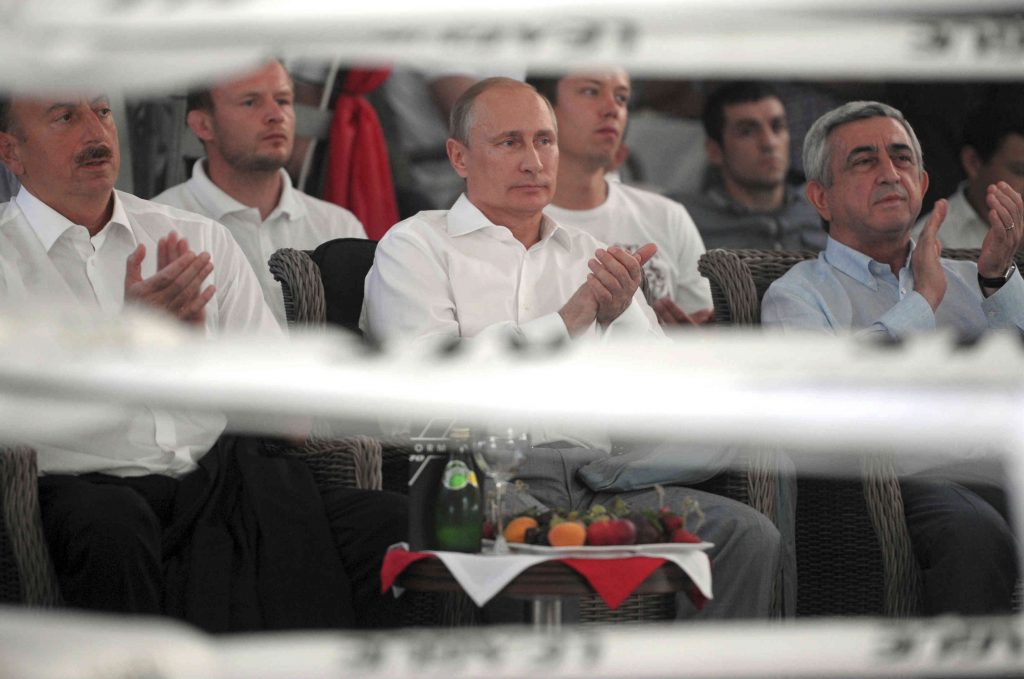 Russia’s track record in the long-simmering conflict between Armenia and Azerbaijan is consistent with Russian efforts in Moldova, Georgia, and Ukraine, and Russian President Vladimir Putin’s calls for a Novorossiya: No war, no peace—but always a place at the table for Russia.

Unresolved frozen conflicts in Transnistria, South Ossetia, and potentially in eastern Ukraine are one of Russia’s main mechanisms for political leverage in its sphere of influence. Russia uses its status as co-chair of the Minsk Group to prevent a settlement in Nagorno-Karabakh (NK), a mountainous breakaway region of Azerbaijan that has been at the heart of a dispute between Armenia and Azerbaijan for more than two decades, and to perpetuate its military presence in the region.

The Conference on Security and Cooperation in Europe (now the Organization for Security and Cooperation in Europe, or OSCE) established the Minsk Group in 1992 to resolve the NK conflict, with Russia, France, and the United States serving as co-chairs. But over time, the co-chairs did not function as envisioned. The United States abdicated its role after a failed peace summit in 2001. Between 2008 and 2011, then-Russian President Dmitry Medvedev stepped outside the Minsk process and hosted nine meetings with Armenian President Serzh Sarkisian and Azerbaijani President Ilham Aliyev, all without the United States. According to a high-ranking Azerbaijani official, the US role in the Minsk Group from 2009 to 2011 was that of a “spectator” And that since then, not much has changed.

By contrast, Russia uses the conflict to maintain its presence in the South Caucasus. During the war in the early 1990s, the Kremlin played both ends against the middle, making it the irreplaceable presence in the conflict. Russian troops patrolled Armenia’s borders, and the Armenians in NK were dependent on Russia for military supplies.

The same was true for the Azerbaijanis. When fighting broke out in 1992, a phalanx of 150 Russian armored vehicles driven by Russian soldiers under the command of Russian Gen. Alexander Shcherbak led the Azerbaijani attack.

Russia continues to play a double game with Armenia and Azerbaijan today. In 1997, Armenia agreed to lease the Gyumri base to Russia for 25 years and has since extended that lease through 2044. The price was too good to turn down: the rent was zero. More than 5,000 Russian troops are stationed in the country.

The Kremlin also sells weapons to Azerbaijan. In fact, Azerbaijan gets 85 percent of its military hardware from Russia. In 2013, the Azeri-Russian arms trade was worth an estimated $4 billion.

Russia uses the NK conflict to its own ends, which is to restore its military presence and influence in the South Caucasus. This was true in 1993, when then-Russian President Boris Yeltsin began to reclaim his country’s role in the former Soviet empire, and it’s still true today. Yeltsin pushed the United Nations to grant Russia special powers as a guarantor of peace and stability in the former Soviet Union. Russian diplomats followed Yeltsin’s lead with a series of proposals to insert Russian or Russian-controlled troops into NK. These troops would have been authorized to shoot, which ran counter to the principles of the Minsk Group.

Simultaneously, the Minsk Group considered proposals banning foreign peacekeepers from using lethal force. Russia’s intent all along was threefold: to subvert the Minsk process, ensure that all parties on the ground understood that Russia was the real referee, and supplant the international negotiating process.

In December 1994, the OSCE agreed to a peacekeeping force in NK that would include Russian troops. The Russians insisted on commanding the force and demanded that most of its troops be Russian. The OSCE wanted an OSCE-led force and to limit the number of Russians to less than 50 percent. Yeltsin warned Washington not to try to direct events in Moscow’s sphere of influence, noting that any US role in the South Caucasus risked opening a cold peace between Russia and the West.

In August 2014, Sarkisian and Aliyev met in Sochi at the invitation of Putin, who stressed the “special and particularly close relations” between himself and the other heads of state, since all had come up through the Soviet system. Putin renewed Yeltsin’s claim that Russia had a unique role to play in the South Caucasus.

US policymakers appear to have accepted Russia as an honest broker in NK. Russia’s track record over the past two decades, however, demonstrates that the Kremlin wants to perpetuate its former imperial rule over the remnants of its former empire, not create peace. Russia appears to be pursuing the same goals in Ukraine: creating and ignoring ceasefires as best benefits a continuing Russian presence in Crimea and the Donbas. In short, relying on Moscow’s good faith is a leap of faith that few can afford.

Dr. James J. Coyle is a Research Fellow at the Atlantic Council and the Director of Global Education at Chapman University in Orange, CA.

Image: Presidents Vladimir Putin (C) of Russia, Serzh Sargsyan (R) of Armenia, and Ilham Aliyev of Azerbaijan attend an international sambo tournament in Sochi, August 9, 2014. Russia appears to be pursuing the same goals in Ukraine as it has in Nagorno-Karabakh: creating and ignoring ceasefires as best benefits a continuing Russian presence in Crimea and the Donbas. REUTERS/Alexei Druzhinin/RIA Novosti/Kremlin