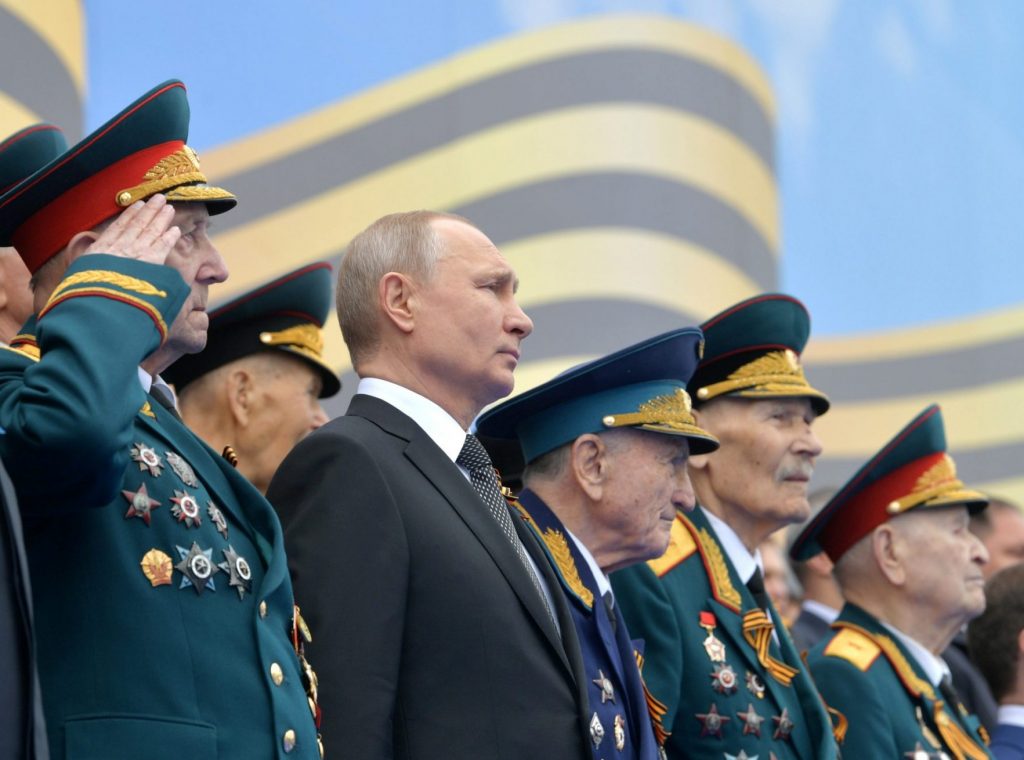 The coronavirus pandemic has forced Russia to postpone this week’s planned celebrations to mark seventy-five years since the defeat of Nazi Germany, but the Kremlin’s efforts to hijack the allied victory in WWII will still cast a long shadow over the anniversary. Throughout the past two decades, Vladimir Putin has placed the war at the heart of his efforts to rehabilitate the Soviet era and rebuild Russian national pride. Under Putin, the traditional Victory Day holiday on May 9 has become by far the biggest event on the Russian calendar. What was once primarily a day of thanksgiving and remembrance has morphed into a nationalistic celebration of Russia’s revival as a global power. The victory cult promoted by Putin has also played a central role in the propaganda efforts to justify Russia’s war against Ukraine, with Kremlin media routinely portraying the conflict as a continuation of the twentieth century fight against fascism.

For most nations, WWII is a tragedy and the ultimate cautionary tale about the dangers of political fanaticism. Memorials are often accompanied by the words “Never again.” However, modern Russians have embraced a strikingly different slogan that carries with it the thinly veiled menace of a nation still bristling from the humiliations of the 1990s. In recent years, the phrase “We can do it again” has come to represent the geopolitical defiance of Russia in the Putin era, concisely capturing the confrontational tone of the country’s Victory Day muscle flexing.

Modern Russia’s mythologized and triumphant version of WWII is strikingly at odds with the traumatic legacy of the conflict elsewhere in Europe. According to most estimates, the war claimed the lives of 60 million people. The biggest battles of WWII, and the greatest carnage, took place on the eastern front in the lands sandwiched between Hitler and Stalin. While only a tiny fraction of modern Russia was ever occupied by the Germans, the whole of Ukraine experienced more than two years of Nazi rule. Around 8 million Ukrainians are thought to have died in the conflict, placing the country alongside Belarus and Poland in terms of the highest proportional losses.

While Ukraine and Belarus were the two Soviet republics that suffered the brunt of the conflict, Russia has been quick to nationalize the Soviet war effort for itself. However, this has not meant acknowledging the less flattering aspects of the USSR’s WWII experience. Modern Russia frequently boasts of having saved humanity from the Nazis, but Moscow has criminalized references the role played by the Soviets in igniting WWII by invading Poland alongside Hitler in September 1939. Instead, Russians are still taught that the war began on June 22, 1941, the day Hitler launched his invasion of the USSR.

The August 1939 Nazi-Soviet Pact that paved the way for the joint invasion of Poland has become the subject of furious debate in recent months. Putin himself has led a spirited Russian fightback against European attempts to hold both Berlin and Moscow responsible for the outbreak of WWII. The spat over the Molotov-Ribbentrop Pact is helping to educate modern audiences about Soviet wartime atrocities that had previously been overshadowed by the far more well-publicized crimes of the Nazis.

This is long overdue. Relatively few people know about the Katyn massacres of Polish army officers and members of the country’s intelligentsia by Soviet forces, or the 1940 Soviet occupation of the three Baltic states, which would have to wait half a century before regaining their independence. The late 1939 Soviet invasion of Finland is similarly absent from many mainstream WWII narratives, despite leading directly to the USSR’s expulsion from the League of Nations.

Knowledge of Soviet crimes against humanity sheds important new light on the complexities of the war on the eastern front and challenges the Kremlin’s simplistic caricature of the conflict. This is particularly true in relation to the nationalist insurgent groups that arose during WWII in the Baltic countries, Poland and Ukraine. Caught in an often impossible situation between two genocidal totalitarian regimes, some of these groups initially welcomed the Germans in 1941 as potential liberators, before then spending most of the war fighting both Nazis and Soviets as well as each other.

Since the fall of the USSR, these insurgent fighters have been officially recognized in their home countries as national liberation movements, but Russia continues the Soviet tradition of demonizing them as Nazi collaborators and fascists. Any attempts at reconciliation are rejected and old wounds are prevented from healing. Instead, Moscow uses the issue to provoke scandals and trigger conflict within post-Soviet societies.

Nowhere is this more evident than in Ukraine. Russia’s ongoing hybrid war against Ukraine owes much to the Kremlin weaponization of WWII and Putin’s cynical exploitation of the conflict. These tactics are nothing new but have been significantly updated for the digital age. Ever since the 1940s, Moscow has portrayed the Ukrainian independence struggle as a fascist movement virtually indistinguishable from Nazism. This characterization dominated Russian coverage of Ukraine’s 2013-14 Revolution of Dignity, and became the core message of the information war that accompanied the subsequent Russian seizure of Crimea and invasion of eastern Ukraine. While deifying Red Army soldiers and whitewashing the Soviet war effort, Russia has waged war on the grandchildren of Ukrainian Red Army veterans and branded them as Hitler’s heirs.

In this respect, Russia’s treatment of Ukraine is extreme but not exceptional. On the contrary, accusations of fascism have become the default response to any group or nationality in the post-Soviet world that seeks to contest Moscow’s interpretation of history or distance itself from the Russian orbit. The highly-charged term has even been used in attempts to discredit the anti-Putin opposition within Russia itself.

The sheer scale of the Soviet losses during WWII make it an incredibly emotive issue for all people of the former USSR. As such, it requires uniquely sensitive handling and an emphasis on honoring the memory of the victims. Instead, Putin has turned the war into a propaganda tool to glorify his own regime and bully his neighbors.

Russia’s exploitation of WWII to legitimize the war in Ukraine, along with the country’s swaggering threats to “do it again”, have made Victory Day a symbol of international aggression that says much about the Kremlin’s true intentions on the world stage. Seventy-five years after the fighting officially stopped, it is time to end this painful politicization of the past.