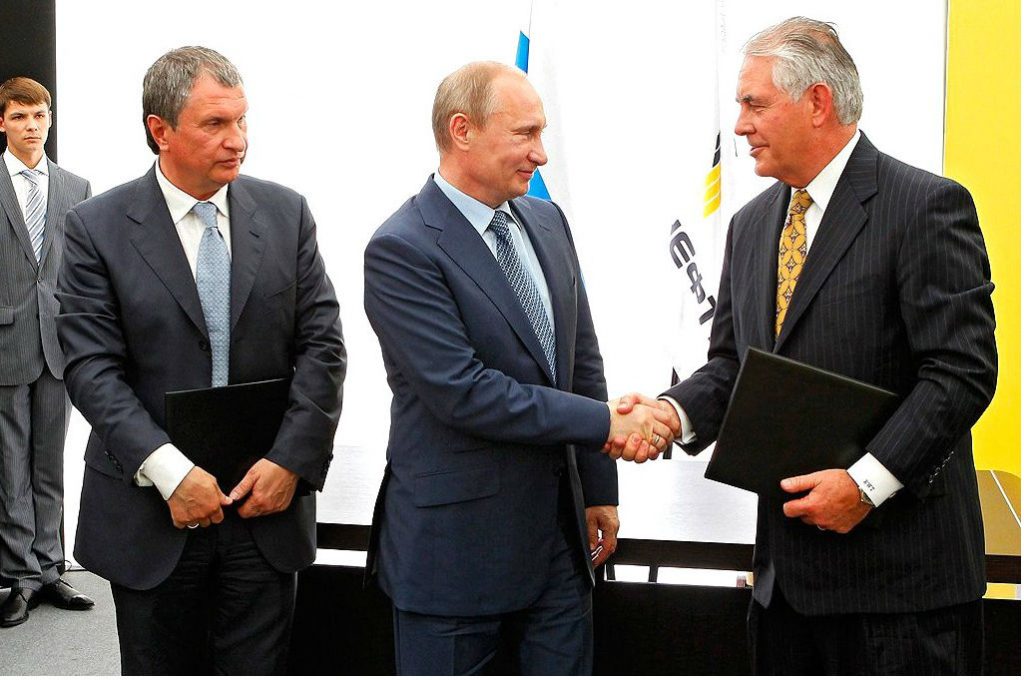 President-elect Donald Trump has picked ExxonMobil CEO Rex Tillerson as his secretary of state. In 2013, Russian President Vladimir Putin personally bestowed Russia’s Order of Friendship on Tillerson. As CEO of ExxonMobil, he’s argued for sanctions relief on Russia. By October 2016, some reports estimate that Exxon has lost $1 billion because of White House sanctions. We asked Atlantic Council experts and UkraineAlert contributors the following question: What does a friend of Putin at Foggy Bottom mean for Ukraine and Russia?

Anders Åslund, Senior Fellow at the Atlantic Council: President-elect Donald Trump’s nomination of ExxonMobil’s CEO Rex Tillerson is profoundly disturbing. Tillerson will receive a “nest egg” of some $300 million from ExxonMobil when he retires. These future benefits will be paid over many years making Tillerson deeply dependent on the success of ExxonMobil, not least in Russia, which accounts for a significant share of its investment. This is a serious conflict of interest. Worse, it involves a hostile foreign power. Hopefully, the Senate Foreign Relations Committee would consider such a conflict of interest disqualifying.

While ExxonMobil seems to have abided by the US sanctions against Russia, the company has persistently protested against these sanctions since they were introduced in July 2014. Thus, Tillerson stands out as one of the greatest opponents of the current US policy on Russia. Tillerson has also developed close personal relations with Vladimir Putin and Rosneft CEO Igor Sechin. While that might have benefitted the business of ExxonMobil, these are not people that are commonly considered decent.

Stephen Blank, Senior Fellow at the American Foreign Policy Council: Rex Tillerson’s nomination would signal the desire to make a deal with Russia regardless of the consequences. That deal would include lifting sanctions and compromising Ukraine’s sovereignty and territorial integrity. Since there is no economic basis for a deal other than energy business at depressed prices or the usual vague but unsubstantiated progress on economic deals, his appointment should raise red flags about European security in general. There is no sign anything would be done to stop information wars or to promote democratic values and interests, as stipulated in treaties to which Moscow is a party. This appointment would also justify what increasingly looks like Moscow’s investment in a Trump victory. In general, it would represent an abdication of US interests and values.

Ariel Cohen, Nonresident Senior Fellow at the Atlantic Council’s Global Energy Center and Dinu Patriciu Eurasia Center: President-elect Donald Trump wants to shake up the US Government, including the State Department. He believes, as do many captains of industry, that State needs new leadership, ideas, and goals. This may be a valid concern.

For the Trump administration, this includes making our allies pay more for defense provided by the United States; rolling out a more realpolitik and transactional foreign policy, including with Russia; cooperating in fighting ISIS; and diminishing Cold War rhetoric. If China and the Middle East become the two major priorities for the Trump administration, it makes sense to have a working relationship with Moscow. Whether such a relationship can succeed remains to be seen.

Rex Tillerson’s nomination reflects Trump’s comfort with top-tier CEOs and other businesspeople. Tillerson is a great example of a businessman-statesman who has made multi-dollar business deals on five continents. He succeeded in cutting an unprecedented Russian Arctic oil deal with Rosneft, and has an outstanding working relationship with the Kremlin. Whether he is Russia’s “friend” is a different story.

Russian leaders, including Vladimir Putin, and Rosneft CEO Igor Sechin, Putin’s close confidant, feel more comfortable with fellow oil tycoons than with American secretaries of state, who often lecture them about democracy, human rights, and other “unpleasant” issues. However, the Russians may underestimate the hard-nosed policies the Trump administration will hopefully pursue.

Moreover, as Russia has become a pivotal foreign policy issue, Tillerson’s nomination may run into some headwinds. Some Republicans on the Hill, who are concerned about the perceived Russian threat are demanding a bipartisan investigation of Russia’s hacking and other interference in the US election, may decide to oppose his nomination precisely because of his past business dealings with the Kremlin.

Jeffrey Gedmin, Senior Fellow at the Atlantic Council and Georgetown University’s School of Foreign Service, and Senior Adviser at Blue Star Strategies: “There’s a lot of Democrat in Donald Trump. There’s a lot of Republican in Donald Trump,” says Alex Castellanos. The Republican strategist tried recently to reassure that the president-elect is more pragmatic dealmaker than ideologue.

To be sure, though, our next president has a worldview. In 1987, the real estate developer bought ads in the New York Times and elsewhere to berate dead beat allies and demand a limited US role in the world. Today it’s Ukraine that’s expendable. Three decades ago, Trump insisted that the Persian Gulf was of “only marginal significance” to America.

Enter Rex Tillerson, the ExxonMobil CEO and president-elect’s choice for secretary of state.

Tillerson would be yet another senior official with no experience in government or public policy.

Alongside National Security Advisor Michael Flynn, Tillerson would count as yet another member of Donald Trump’s Vladimir Putin fan club. He has deep business ties with Russia and was feted by the Russian president in 2013. His views on sanctions for Kremlin aggression in Ukraine are known (he’s against), while his opinion of NATO, Russian occupation in Georgia, and Baltic security are unclear.

John E. Herbst, Director of the Atlantic Council’s Dinu Patriciu Eurasia Center: President-elect Donald Trump’s nomination of ExxonMobil CEO Rex Tillerson is a disturbing development. Whether it is a catastrophe remains to be seen.

For years Vladimir Putin has pursued a revisionist policy in Eurasia designed to overturn the post-Cold War order that provided a half century of global stability and prosperity. He has changed borders in Georgia and Ukraine by war, committed regular provocations against NATO allies in the Baltics, organized a coup against the government of Montenegro, interfered in the US presidential election, and sought to undermine NATO. As a candidate, Trump said naive things about Russia that indicated no understanding of the dangers posed by the Kremlin, cast doubts on the US commitment to its NATO allies, and demonstrated a basic ignorance of Moscow’s aggression in Ukraine. To stop Putin, we need a strong policy.

Fortunately, Vice President-elect Mike Pence understands this. So does Defense Secretary nominee James Mattis, Deputy National Security Advisor-designate KT McFarland and, despite some stories to the contrary, National Security Advisor Michael Flynn. There is no indication that Tillerson recognizes these dangers. Tillerson’s stated opposition to US sanctions on Russia for its war in Ukraine —perhaps understandable coming from an oil company with major interests in Russia —is a strike against him. Trump’s failure to see this is worrisome. So too is his decision to ignore clear signals from the Senate that Tillerson is a far from ideal nominee. A large bipartisan majority in Congress recognizes the challenges posed by Putin’s Russia. Trump will need to work with Congress to pass his agenda. What would prompt him to challenge Congress over an issue —Russia —that was not essential to his electoral success?

Diane Francis, Nonresident Senior Fellow at the Atlantic Council and Editor at Large with the National Post in Canada: Rex Tillerson, as chair and CEO of ExxonMobil, oversees operations in fifty countries and leads a transnational giant with revenues equivalent to the GDP of the forty-fourth largest economy in the world. He has the background and skills to be secretary of state, but only if he understands that what’s good for Exxon is not necessarily good for America. And he will.

That is because to become secretary of state, he must divest his Exxon stock, worth an estimated $150 million. This is what Goldman Sachs CEO Hank Paulson did in 2006 in order to become secretary of the treasury, and is a requirement for those with potential conflicts of interest willing to undertake public service.

This will enable him to reconstitute his relationships around the world and to shift interactions from matters of commerce to geopolitical, socio-economic, and strategic objectives.

Obviously, allowing Putin to run amok militarily in Eastern Europe and the Middle East is not in anyone’s interests, least of all America’s. Neither is removing sanctions against Russia until Putin withdraws his military forces from Ukraine and Syria.

Ironically, Tillerson understands Russia’s abusive and corrupt governance more than most because he’s done business there. He also knows that Putin is months away from a financial meltdown due to sanctions caused by his own violence. So the art of this deal will simply be to dictate terms to Putin and not the other way around.

Steve LeVine, Washington Correspondent for Quartz and Future Tense Fellow at New America Foundation: Notwithstanding the medal, we do not know that Rex Tillerson is a “friend” of Putin’s. We know that he successfully traversed the extremely difficult Russian system and positioned Exxon exceptionally well prior to the sanctions dealing the company a setback. I presume that Tillerson will represent US interests, and not Exxon’s. What I worry about, however, is whether he is prepared to speak truth to power. That is, will Tillerson stand up to Trump early and often and be a voice of realism on Russia and Putin, rather than the glossy image that Trump portrays again and again. If he is not prepared to do so, that could mean serious trouble in terms of Putin’s aims of undermining the US, NATO, and the EU.

Hannah Thoburn, Research Fellow at the Hudson Institute: It’s hard for a tiger to change its stripes, but let’s hope that Rex Tillerson can. He has spent a career building projects and making deals in countries like Russia with deep energy reserves but little in the way of democratic values. This experience is the basis of his relationship with Vladimir Putin, and seemingly the impetus behind his negative statements about the US sanctions placed on Russia after their annexation of Crimea and invasion of Ukraine.

That the Kremlin seems excited about Tillerson’s nomination cannot be a comfort to Ukrainians. His nomination—when taken alongside the pro-Russian statements from other members of Trump’s team, the close relationship of Viktor Yanukovych’s former political technologist Paul Manafort with Trump, and the business-first focus of many others in Trump’s future cabinet—certainly does not augur well for Ukraine’s European direction. Perhaps Tillerson will represent US interests as well as he has ExxonMobil’s, but he seems likely to enter the office wearing blinders to the true reality of the Kremlin’s international activities.

Melinda Haring is the editor of UkraineAlert at the Atlantic Council. She tweets @melindaharing.