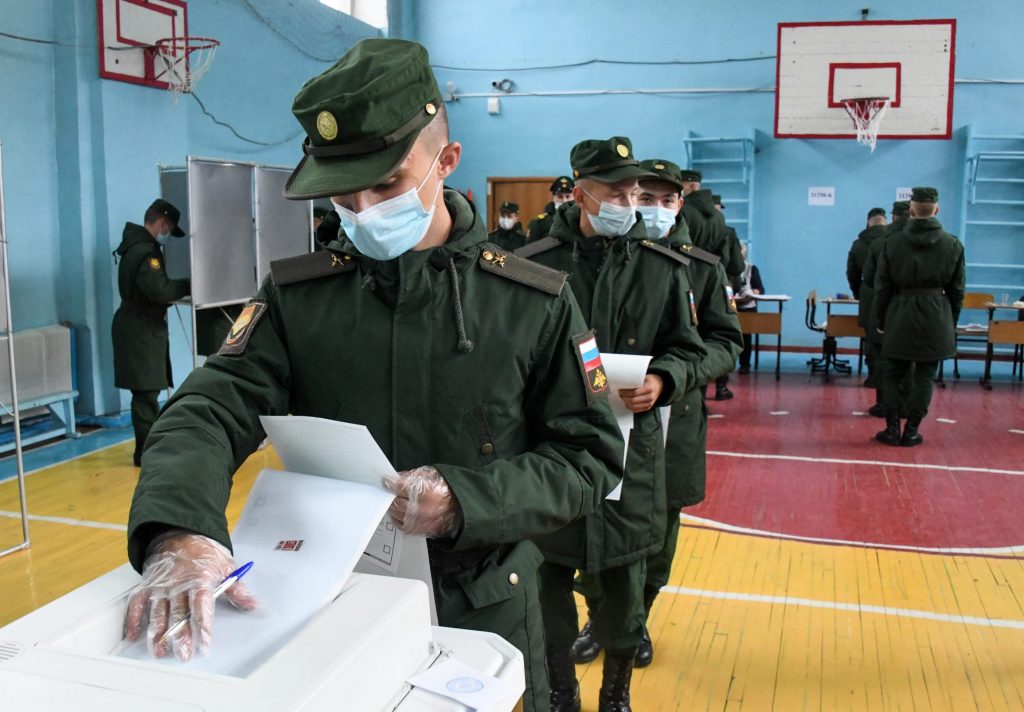 Russian President Vladimir Putin appears genuinely convinced that Russians and Ukrainians are “one people.” As he made perfectly clear in his lengthy July 2021 essay “On the Historical Unity of Russians and Ukrainians,” Putin believes the two countries remain inextricably bound together by a common past, and regards their current state of separation as a temporary and artificial aberration.

Since 2014, Putin’s “one people” argument has regularly featured in attempts to justify Russia’s ongoing campaign of aggression against Ukraine. But while Kremlin officials are fond of emphasizing the shared history connecting modern Russia and Ukraine, they are largely silent over the many fundamental differences and distinctions that have come to the fore since the end of direct imperial rule in 1991.

The growing gulf between the two countries was on display in recent days as Russia held parliamentary elections. Almost everything about the vote was farcical, from the exclusion of opposition candidates and the silencing of Russia’s last few remaining independent media outlets, to the more or less open stuffing of ballots at polling stations across the country.

The most flagrant fraud seems to have occurred in Moscow itself, where a carefully curated overnight dump of dubious electronic votes enabled the authorities to transform a series of potentially embarrassing defeats into face-saving victories for regime candidates. Overall, the recent ballot looks to have been notably dirty, even by the admittedly low standards of the Putin regime.

While few in Russia are under any illusions about the nature of the regime itself or the country’s recent election, the public reaction to the vote was remarkably muted. Many Russians took to social media to express their outrage, while a few hundred people actually went to the trouble of gathering briefly in central Moscow on Monday evening, but there was no real attempt to mobilize the wider population or actually fight back. Instead, the blatantly fake results of an obviously rigged election were accepted with grim resignation.

Such a sequence of events would be utterly unthinkable in today’s Ukraine. The last Ukrainian election to remotely resemble Russia’s recent fiasco took place seventeen years ago in November 2004. On that occasion, the Ukrainian authorities deployed many of the same tactics currently favored by the Kremlin in an attempt to secure victory in what was a hotly contested presidential ballot.

The Ukrainian electorate’s response to this widespread voter fraud was both unambiguous and overwhelming. Faced with the prospect of a stolen election, millions flocked to downtown Kyiv in defense of their democratic rights, fueling a two-month grassroots protest movement that came to be known as the Orange Revolution.

The Orange Revolution was to prove a watershed moment in post-Soviet history. It achieved the immediate goal of forcing a re-run of Ukraine’s 2004 presidential election, which was duly won by opposition candidate Viktor Yushchenko. More importantly, Ukraine’s people power uprising marked a civilizational shift for the country that took it away from Kremlin-style authoritarianism and towards European democracy. It was the moment Ukraine decisively parted ways with Russia and set out on an altogether different trajectory.

Since the Orange Revolution, Ukraine has held eight separate presidential and parliamentary elections. All have been internationally recognized as free and fair. Campaigns are typically colorful, creative, and highly competitive, with civil society scrutiny helping to ensure maximum transparency and numerous exit polls on election day offering remarkably accurate forecasts. The openness of Ukraine’s democratic system was most recently reaffirmed in 2019, when political outsider Volodymyr Zelenskyy defeated incumbent Petro Poroshenko to win the presidency by a landslide.

Ukraine’s fledgling democracy is far from perfect, of course. The country’s political system has long been hostage to excessive oligarch influence, with a handful of billionaire kingmakers controlling entire parties and owning virtually every Ukrainian media outlet of note.

Since the outbreak of war with Russia in 2014, wartime national security concerns have also necessitated a range of restrictions including bans on Russian TV broadcasts and the closure of Kremlin-linked Ukrainian media. At the same time, it is important to note that despite ongoing hostilities, openly pro-Russian political parties continue to contest Ukrainian elections and hold office at both the local and national levels.

As Ukraine has consolidated its fledgling democracy, Russia has retreated further and further into authoritarianism. During Putin’s twenty-one-year reign, the fragile political pluralism he inherited from Boris Yeltsin at the turn of the millennium has gradually given way to the Potemkin politics of today’s stage-managed imitation democracy with its loyal opposition, muzzled media, and passive public. The contrast between the two neighboring countries could hardly be starker.

While Putin continues to insist that Russians and Ukrainians are both members of the same indivisible whole, the reality is that Ukraine’s democratic political culture virtually rules out the prospect of any voluntary future reunion. A majority of Ukrainians would never willingly vote for a return to the authoritarian past, nor would they be prepared to accept the kind of massive election fraud that has been normalized in today’s Russia.

This leaves Putin with little choice but to continue the current conflict indefinitely. The alternative would mean retreating from Ukraine and acknowledging an unprecedented loss of influence in a country that has been central to Russia’s sense of imperial identity for more than three centuries.

Democracy is by no means the only thing that distinguishes modern Ukraine from Russia. Indeed, it would be easy enough to produce a long list of specific historic, social, and cultural characteristics that make a mockery of Putin’s “one nation” mythology. Nevertheless, post-Soviet Ukraine’s democratic development remains the most prominent feature of this widening divide and the root cause of the Russo-Ukrainian War.

Why we must not recognize Russia’s fraudulent election

Russia’s parliamentary elections failed to meet even the most basic democratic standards and served to illustrate the country’s slide into dictatorship under Vladimir Putin, says Ukrainian MP Oleksiy Goncharenko