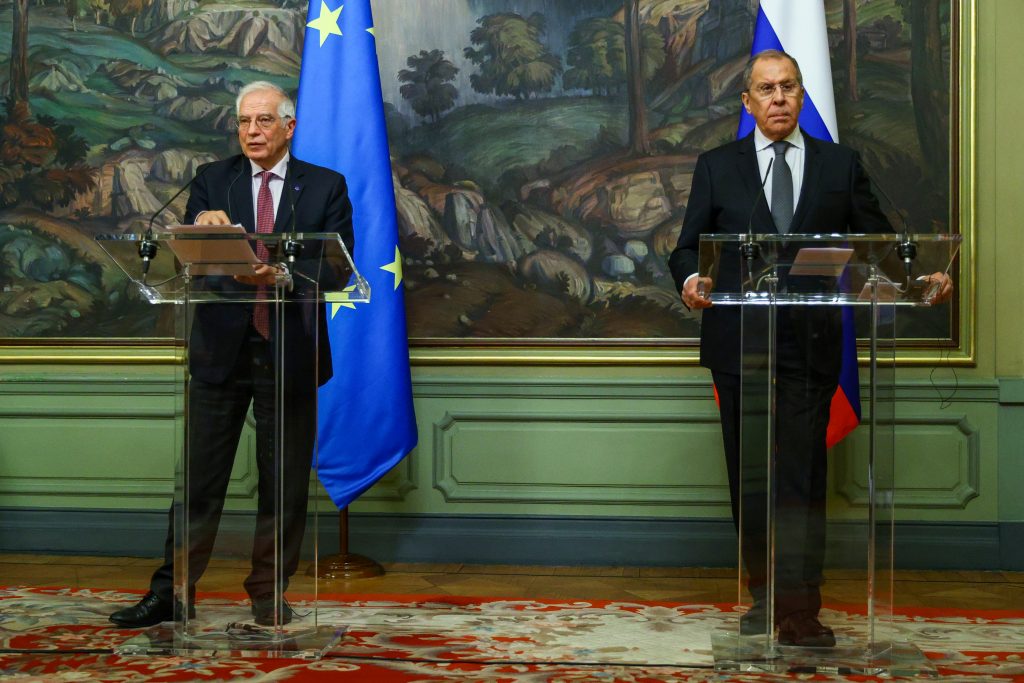 Relations between the European Union and Russia have been plunged into crisis by EU foreign affairs chief Josep Borrell’s humiliating early February visit to Moscow.

The EU’s top diplomat was treated with what appeared to be calculated disdain in the Russian capital. During his visit, Borrell learned from social media that Moscow was expelling three EU member state diplomats. He then stood by passively while his Kremlin counterpart Sergei Lavrov dismissed the European Union as an “unreliable partner.”

The fiasco sparked anger and outrage across Europe. Once back in Brussels, Borrell countered by threatening to impose new sanctions on Moscow, while also warning that Europe and Russia are in danger of drifting apart. “It seems that Russia is progressively disconnecting itself from Europe and looking at democratic values as an existential threat,” he noted in an account of his disastrous trip.

The embarrassing episode looks set to become a landmark moment in the often tense relationship between Russia and the European Union. While EU sanctions have been in place since the start of Russian aggression against Ukraine in 2014, officials in Brussels have generally sought to avoid confrontational rhetoric. Instead, there has been a lively and ongoing discussion within the EU over the need to keep channels of cooperation and communication open with the Kremlin.

Moscow’s disrespectful and unfriendly actions now appear to have left EU officials with little choice but to accept that there will be no thaw in relations for the foreseeable future. This freeze in bilateral ties creates considerable opportunities for Ukraine.

As the principle victim of Russia’s aggressive and revisionist policies towards the European neighborhood, Ukraine has a direct interest in maintaining international pressure on Moscow. This means using all available platforms and diplomatic channels to remind EU audiences of Russia’s criminal actions in Ukraine itself and also in Georgia, Moldova, and beyond.

One important platform is the Parliamentary Assembly of the Council of Europe (PACE). During the recent winter session of PACE, which took place in hybrid format for the first time, a Ukraine-led effort to challenge the credentials of the Russian delegation failed, but delegates did pass a resolution that was highly critical of Russia.

This may seem like an insignificant outcome, but it was also in many ways revealing. The Russian reaction to Ukraine’s efforts bordered on hysterical, indicating that the Kremlin regards such matters as anything but trivial.

This should come as no surprise. While European officials lobbied for Russia’s return to PACE in 2019 by arguing that it would serve as a useful platform for dialogue, Moscow appears to regard PACE as just another opportunity to promote its propaganda messages. The last thing Russia wants is for this process to be disrupted by awkward reminders of the Kremlin’s conduct.

Russia managed to engineer a return to PACE despite refusing to address any of the concerns that led to the country’s initial suspension in 2014. Instead, it is no secret that the pragmatic reason for Russia’s return was the Kremlin’s considerable annual contribution to the PACE budget. As Borrell himself recently discovered in Moscow, this craven surrender of European values has only served to fuel the sense of cynicism in Russia towards European institutions.

Why should Europe accept this? It would be inaccurate to suggest that European politicians are entirely unaware of Russia’s hostile actions across the continent. Likewise, few have any illusions over Moscow’s bad faith approach towards its participation at PACE. Despite this awareness, many Europeans still seek to avoid any further confrontations with the Kremlin and would much prefer to ignore Russia’s alarming conduct.

The fact that EU sanctions remain in place despite repeated calls since 2014 for a return to “business as usual” with Russia is in itself a victory for European values and represents a considerable achievement for Ukrainian diplomacy. Nevertheless, these calls continue.

Looking ahead, Ukraine must be realistic about the growing sense of fatigue within the international community towards the country’s struggle against Russian aggression. Politicians throughout Europe who have little understanding of Putin’s imperial ambitions or the Kremlin’s revisionist mindset remain reluctant to turn a largely forgotten conflict into a genuine Cold War.

Unfortunately, Ukrainians do not have the luxury of being able to ignore the ongoing conflict in their country. The war that Russia began in 2014 is about to enter its eighth year with no sign of any progress towards peace. On the contrary, Russia shows every indication of being prepared to maintain current levels of aggression indefinitely. This is why it is so essential for Ukraine to keep international attention focused on the need to counter Russia.

For the past seven years, Moscow has benefited from the EU’s ineffective foreign policy. However, thanks to Russia’s own undiplomatic conduct, calls are now growing in Brussels for a tougher stance towards the Kremlin. It is in Ukraine’s interests to support and amplify these demands.

As a nation at war, Ukraine cannot afford to be a passive figure in European diplomacy. Russia’s recent display of contempt for the EU has created opportunities for Kyiv to take on a more prominent role in the debate over how best to handle the Kremlin. Nobody understands the threat posed by Russia better than Ukraine. The task is to share this knowledge in ways that will galvanize European opposition to Russian aggression.