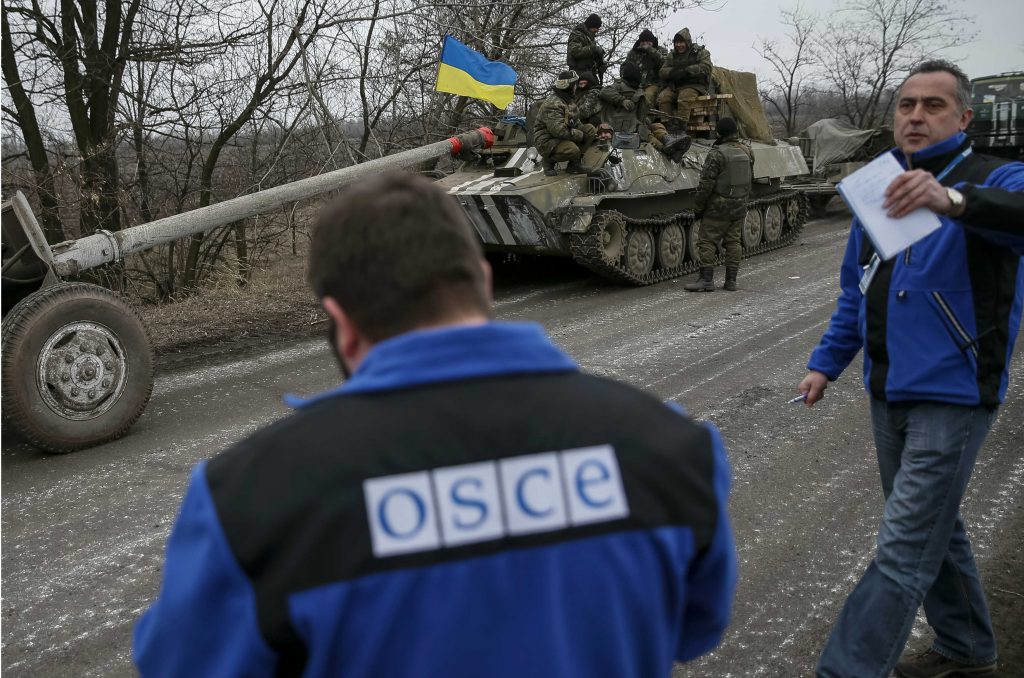 Members of Special Monitoring Mission of the Organization for Security and Cooperation (OSCE) to Ukraine walk along a convoy of Ukrainian armed forces in Paraskoviyvka, eastern Ukraine, February 26, 2015. REUTERS/Gleb Garanich

The unarmed men and women in flak jackets and helmets who document Ukraine’s grinding war in the east for the Organization for Security and Cooperation in Europe have my utmost respect. In some senses, they are writing the first draft of history. Few Ukrainian or international journalists can observe the non-government controlled areas of Ukraine anymore and what we know about the conflict mainly comes from the OSCE Special Monitoring Mission (SMM).

The problem is that while these individuals make great sacrifices, the mission itself is compromised by Russia.

According to the ARD report, these Russian individuals have been gathering personal information about other monitors, including personal information like mobile phone numbers addresses, and blood types. True to form, they have also been making notes on potentially damaging or compromising issues, such as drinking habits, sexual activity, and financial issues.

The ARD report is consistent with conversations that UkraineAlert has had with former SMM observers who asked not to be named.

At least one credible source has described an effort to recruit him in 2016. The SMM observer doing the recruiting was a Russian diplomat who appeared to have detailed knowledge of my background, the source said. “There’s no doubt in my mind that he knew who I was,” the former SMM observer said.

The Russian monitors have been noting anything that might be useful in an attempt to manipulate a person and passing that information back to Moscow. The word kompromat (компромат) has become commonplace and well understood, but the collection of compromising materials like this has been standard practice for Russian spies for many years.

The news didn’t surprise Ukraine. Indeed, Ukraine Foreign Minister Pavlo Klimkin has said that “All Russians in the OSCE mission are spies.”

The West should have known better. We missed obvious warning signs. In 2016, Peter Dickinson, now a nonresident research fellow at the Atlantic Council, interviewed a former OSCE SMM monitor who stated that it was only in the aftermath of the tragic shoot down of flight MH17 that killed 298 people that many members of the mission realized they had previously “underestimated the significance of Russian interference in the conflict” and also that the Russian group had attempted to influence the opinions of other monitors by persuading them that the only way to end the conflict would be for Ukraine to become a federalized state, which was an early demand from Moscow.

In October 2015, Russian national Maxim Udovichenko was expelled from the mission for admitting, when drunk, that he was a Russian spy. Following that incident, a SMM spokesman stated that the mission “relies on the good faith of member states to send monitors to the OSCE who will work on the basis of impartiality.”

Are we really relying on Russia to act in “good faith”? Still?

More reporters need to dig into this story. We have encountered allegations that Russian observers have changed field reports as well, but additional reporting is required to verify this claim.

Some will claim that nothing can be done. The argument will be made that there have to be Russian monitors because any mission constituted by the OSCE requires a mandate that is unanimously backed by all 57 OSCE member states, and Russia is a member, so they essentially have an ultimate veto. Without Russia’s sign off on how the mission is constituted, there would be no mission at all. Technically, this is true, but there’s a precedent for excluding them.

During the Balkans conflict, Yugoslavia was obviously a party to the conflict, and it was set aside; decisions were then made on a new basis simply called “unanimity minus one.” The restriction of voting rights within the OSCE is a sanction against Russia that should have been imposed long ago.

It will be difficult to get some other OSCE member countries, allies of Russia, to accept that unanimity minus one should now be applied in Ukraine. But at the very least, this conversation should be opened.

The OSCE SMM has been compromised. It cannot serve in the unbiased way that it is meant to as long as there is a gaggle of Russian spies sitting in the heart of the mission that is designed to inform the world about events from a conflict that Russia itself has created. The only way around this problem, and the only appropriate sanction against Russia for its deliberate efforts to compromise the mission, not to say endangering the monitors involved, is the unanimity minus one principle.

Russia is without doubt a party to the conflict in Ukraine, and without doubt so, too, is Ukraine. For this reason, there aren’t any Ukrainian monitors in the SMM. (Ukrainian citizens are employed by the OSCE in Ukraine in a variety of administrative roles.) It follows therefore that there should be no Russian monitors. The OSCE must move to immediately suspend any Russian input whatsoever in the mission they are clearly trying to undermine from within.

Paul Niland is a longtime Kyiv resident and the founder and CEO of Statement Email Ltd. He tweets @PaulNiland.