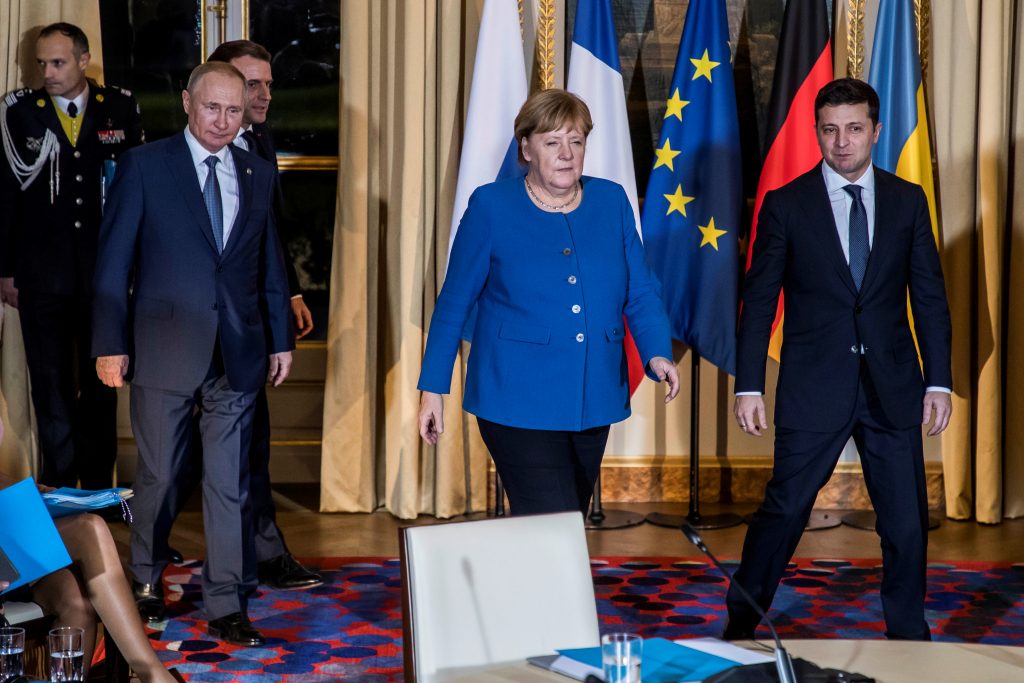 Monday’s Normandy Four summit in the French capital saw German Chancellor Angela Merkel and France’s Emmanuel Macron sitting down with Volodymyr Zelenskyy and Vladimir Putin in a bid to end years of deadly stalemate and bring to an end the undeclared war between Russia and Ukraine in the Donbas. This was the first face-to-face meeting between Zelenskyy and Putin, but it was nothing new for Chancellor Merkel. Ever since 2014, Germany has played a central role in diplomatic efforts to resolve the crisis on Europe’s eastern border. What kind of impression did this week’s long-awaited Paris summit make in Berlin?

The final declaration is modest. The military disengagement at three points of the front is to be extended to three further points. A proper security corridor would be better. If the plan goes wrong because one side takes advantage of the other’s retreat, the accusation of compromising the security of Ukrainians could cost President Zelenskyy dearly. The autocrat Putin, however, does not have to fear domestic protests over victims. That is why the Ukrainian initiative is a courageous attempt to examine Moscow’s seriousness. The reference in the summit declaration to the OSCE mandate and the observer mission’s unrestricted access to Ukrainian territory is an opportunity to hold Moscow to account. It is a challenge not to obstruct observers and not to threaten their security. Germany and France continue to have a high degree of responsibility. Those who do not clearly state what Russia is doing on the ground are partly to blame for the deception. Russia’s demand that Kyiv negotiate directly with the “separatists” is dangerous. Without the Kremlin, these “separatists” are neither functional nor capable of making decisions. They are organized dictatorially and responsible for gross human rights violations. Their consolidation should be prevented by all means. It serves neither peace nor stability.

It was foreseeable that the Normandy summit in Paris would not achieve a breakthrough in peace negotiations. The first summit involving national leaders in more than three years was nevertheless important. The summit once again drew attention to the war and suffering in the Donbas. With the prospect of further military withdrawals, an extensive exchange of prisoners and new crossings along the line of contact, there is a chance to reduce hostilities and improve the humanitarian situation. Zelenskyy sees the summit as a success. He credibly demonstrated his desire for peace, but at the same time confirmed the red lines that exist for Ukraine. Russia, however, still has the reins in its hand. The Kremlin’s interest in a controllable conflict in Ukraine remains unbroken. Russia wants to reintegrate the separatist territories under its control into Ukraine, and seeks to legitimize its warlords through elections. If this does not succeed, everything will remain as fragile as it is. Both options are bad for Ukraine.

“Hope” is the word that I read and heard most often during the morning after the Normandy summit. The prisoners set to take part in a new exchange and their families can now hope to meet again at home before Orthodox Christmas in January. However, this is not the first time that people in the war zone have approached the festive New Year season with the promise of a new ceasefire or otherwise improved conditions. This will be their sixth Christmas living with reality of the war Putin is waging against Ukraine. To ensure that the promise of Paris becomes reality, the commitment of Germany and France must go beyond the negotiating table. More consistent efforts are needed to monitor and verify all agreed steps. If agreements are broken, reactions are necessary. It is vital to underline that Putin’s aggression is a threat to the entire continent and not only to Ukraine. Questions remain regarding how Putin will implement the commitments made in Paris. The ongoing dispute over Ukrainian control of Ukrainian territory, including the border with Russia, shows that there have yet to be any real concessions.

The Normandy summit finally drew attention back to the Donbas war. Those who are disappointed with the outcome had unrealistic expectations. Those who feared a “capitulation” by Ukrainian President Volodymyr Zelenskyy can breathe a sigh of relief. The importance of the Normandy Summit lies above all in the renewed attempt to guarantee a ceasefire. The entire peace process stands or falls with it. The planned comprehensive exchange of prisoners, selective troop disengagements, demining, and new crossings along the contact line are all important steps for the population affected by the war. Nevertheless, the most contentious issues remain open. The “Steinmeier Formula” addressing the sequencing of local elections and special status for parts of the Donbas will be incorporated into Ukrainian law. However, this formula says nothing about the conditions necessary to ensure that elections take place according to Ukrainian law, as provided for in the Minsk Agreement. This would require a concrete demilitarization plan that does not postpone the return of control over the Ukrainian-Russian border until the end of the process.

The Normandy summit in Paris ended without any breakthrough. Instead, it confirmed the status quo. With the Paris summit, the Russian occupation of eastern Ukraine seems to be entering into a new phase of stabilization and normalization. Not only Crimea but also Donbas will remain under Russian control, probably for quite some time. The situation in Donbas is moving towards arrangements familiar from the example of Transnistria in Moldova, along with South Ossetia and Abkhazia in Georgia, featuring Russian-controlled puppet governments. As this reality becomes clearer, the Normandy Four format may evolve into something similar to Germany’s “Ostpolitik” of the 1970s. Rather than attempting to reverse the overall picture, efforts will focus on trying to make life easier for the people on the ground. In any case, Putin did not get what he wants from the Paris talks, which is international legitimacy for the Russian occupation, leading to the removal of sanctions and the full normalization of relations with the West. Together with Merkel and Macron, the Ukrainian president refused to rubber-stamp Putin’s interpretation of the Minsk agreement, which centers on elections at the barrel of a (Russian) gun in eastern Ukraine. Instead, Zelenskyy insisted that in order to be free, elections in Donbas could only take place after Russian troops have left and Ukraine controls its borders again. Merkel and Macron held their ground in Paris and did not sell out Ukraine, as some had feared before the summit.

The Normandy summit in Paris was a hopeful sign. Almost six years have passed since the outbreak of the conflict, which has already claimed more than 13,000 lives. Three years had passed since the last meeting of the heads of state of Germany, France, Ukraine, and Russia in this format. We owe the revival of the peace process to President Macron’s commitment. I therefore very much welcome the fact that France is once again becoming more involved. Together we can achieve a great deal. The meeting was also a success because it was the first personal meeting between President Putin and President Zelenskyy. With the election of Zelenskyy, it now seems possible that Russia and Ukraine will increasingly enter into bilateral talks. This has created a new dynamic. The new Ukrainian president has taken a big step towards Russia, which represents a major risk for his political future. Now it is crucial that the important agreements reached in Paris, such as the exchange of prisoners according to the “all for all” format, and the full implementation of a new ceasefire by the end of the year, move forward. The people in Ukraine have suffered too long.

As expected, there was no big breakthrough in Paris. Nevertheless, the results are impressive. After three years of standstill, there are now clear, tangible agreements with concrete deadlines. The will for peace on both sides can be measured by this. The greatest challenge, in my view, is to maintain the ceasefire and withdraw arms from the whole region. The key lies in Putin’s hands, because only he can influence the so-called “people’s republics”. This will not happen, however, if he wishes to pursue his objective of destabilizing Ukraine. I now see it as Germany and France’s duty to monitor implementation and punish any lack of progress. From my point of view, there is still much work to do. However, border control and elections are only realistic once the legitimate Ukrainian government has regained control of the entire territory and the withdrawal of fighters completed. For that to happen, we need an OSCE or UN blue helmet mission with a corresponding mandate.

President Zelenskyy was able to secure the solidarity of his country’s doubting European partners. Zelenskyy’s own strong will for peace allowed him to achieve small technical successes. This is especially true for the people living along the line of contact. For them at least, the rather modest results of the summit offer hope for improvements in their daily lives. However, this basic assessment cannot conceal the fact that the Normandy process, which is now relaunching, will ultimately put the Kremlin and President Putin in a stronger negotiating role. Zelenskyy’s apparent political dependence on successes in the peace process and France’s questionable role in the shaping of EU-Russia policy are so striking that without making any concessions of its own, Moscow can give the impression that it is also constructively involved in the peace process in eastern Ukraine. Russia did not move a single millimeter in Paris on the big issues such as control over the Ukrainian-Russian border and free elections under Ukrainian control in the occupied east. While Putin plays the role of reasonable politician in Paris, bombardments along the line of contact are increasing and fresh mines discovered in the occupied territories. At the same time, the Kremlin is expanding its control over the so-called People’s Republics. Ultimately, therefore, this summit was also a success for Putin. After years of foreign policy isolation, he is now returning to the stage as an equal negotiating partner and necessary dealmaker in Ukraine.

Mattia Nelles is the editor of the German-language website Ukraine verstehen.