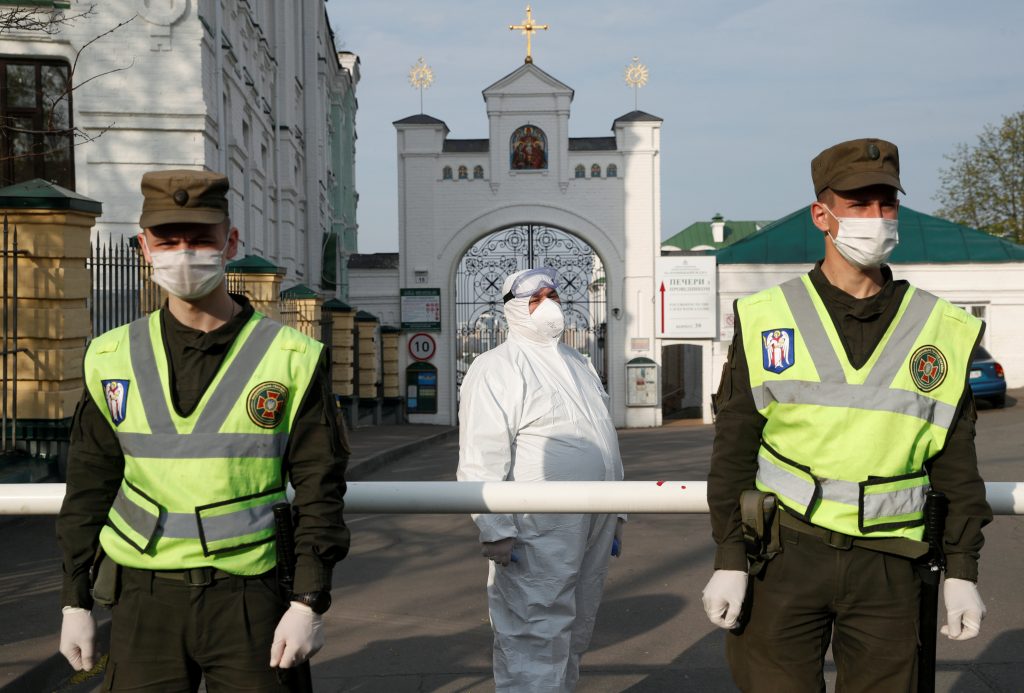 Ukraine’s Orthodox Christian faithful marked Palm Sunday last weekend in subdued mood. With the coronavirus crisis bringing daily life to a standstill, most congregations chose to stay home. The only notable exceptions were followers of the Russian Orthodox Church in Ukraine, with many ignoring the national lock down and gathering outside churches across the country for traditional blessings.

This was not an isolated incident. Just one day later, officials in Kyiv were forced to close down the Moscow-aligned Church’s headquarters in the Ukrainian capital after it emerged as a major coronavirus infection hot spot responsible for dozens of cases. Church leaders appear undeterred and are still encouraging congregations to gather for open-air Easter rituals on Sunday. This has fueled fears of further outbreaks and sparked a flood of public criticism.

The timing of this backlash is unfortunate. Even before the coronavirus outbreak, the Russian Orthodox Church in Ukraine had been reeling from accusations of providing spiritual and material support for Kremlin aggression against the country. The Church’s uncooperative response to the pandemic has now earned it an additional and equally unwelcome reputation as the weakest link during a time of national emergency.

The coronavirus crisis has been a testing period for Ukraine’s Orthodox believers. Quarantine measures introduced by the Ukrainian government have forced the country’s Orthodox faithful to weigh up their religious convictions against the healthcare practicalities of the pandemic. As Orthodox Christianity places particular importance on the church as a safe haven from physical dangers, the possibility of contracting the virus during religious services was initially viewed by many as deeply blasphemous. This reflects traditional Orthodox religious doctrine, and is also due to the fact that modern Orthodox congregations have never faced anything quite like the coronavirus crisis before.

The coronavirus-related closure of churches has been a controversial issue throughout the Orthodox world, but in today’s Ukraine the lock down debate has included an extra political dimension. Such politicization was perhaps inevitable. Ukraine is a majority Orthodox country without a single dominant church. Instead, since the country achieved independence in 1991 there have been two main Orthodox churches whose contrasting fortunes have reflected the ebb and flow of Ukraine’s post-Soviet nation-building endeavors.

The Ukrainian Orthodox Church of the Moscow Patriarchate is the local branch of the Russian Orthodox Church and the country’s largest church numerically in terms of parishes. Although notionally semi-autonomous, it has a long record of close cooperation with the Kremlin and is widely seen as a key source of Russian influence in Ukraine. Until recently, the Moscow Patriarchate was regarded as the senior branch of Ukrainian Orthodoxy as the only Orthodox church in the country to benefit from international recognition. This allowed its followers to look down on the post-Soviet Kyiv Patriarchate as a mere upstart sect.

Events in early 2019 radically transformed this situation. In an historic move that sent shock waves through the entire Orthodox world, the Ecumenical Patriarch of Constantinople, Bartholomew I, granted canonical independence, or autocephaly, to the newly unified Orthodox Church of Ukraine. This gave Ukraine an internationally recognized national Orthodox church free from Russian control for the first time in centuries.

Hundreds of Ukrainian Orthodox parishes have since switched allegiance from Russia to the newly established Orthodox Church of Ukraine, but many thousands across the country remain loyal to the Moscow Patriarchate. These events have made the religious realm an increasingly important front in the ongoing hybrid war between Russia and Ukraine, which is itself an extension of Ukraine’s far longer struggle for an independent identity.

The coronavirus crisis has proven a revealing test of how Ukraine’s rival Orthodox churches relate to the Ukrainian state and Ukrainian society as a whole. Despite initial misgivings, the Orthodox Church of Ukraine has reluctantly adopted government quarantine guidelines and agreed to conduct services with only clergy and choir present. Parishioners have been asked to stay at home, with services broadcast online and on TV. Church officials have even partnered with the country’s biggest online retailer to sell traditional Easter bread consecrated at Kyiv’s St. Michael’s Golden-Domed Monastery, proving that even in the ultra-conservative world of Orthodoxy, it is possible to find modern solutions to modern problems.

This flexibility has been largely absent from the Moscow Patriarchate’s response to the coronavirus crisis, which was initially marked by blanket refusals to follow the Ukrainian government’s anti-pandemic safety measures. Indeed, the head of the Kyiv Pechersk Lavra Monastery, which serves as the headquarters of the Russian Orthodox Church in Ukraine, was particularly outspoken in his dismissals. Metropolitan Pavel actively encouraged believers to attend church services and claimed the virus could be defeated by fasting, prayers and hugs. However, he was forced to change his tune once the monastery itself became an infection hot spot. On April 13, the Kyiv municipal authorities moved to close the Kyiv Pechersk Lavra Monastery following news of over one hundred coronavirus cases and at least two fatalities.

In the wake of the Kyiv Pechersk Lavra Monastery closure, Moscow Patriarchate leader Metropolitan Onufriy issued a statement that hinted at compromise. He called on the Moscow Patriarchate to act in accordance with state quarantine regulations and vowed to no longer permit parishioners inside church buildings. However, unlike the Orthodox Church of Ukraine, he did not call on the faithful to stay at home. Instead, Metropolitan Onufriy promised believers that Easter services would proceed and invited them to come and pray outside churches, a move that could result in hundreds of thousands of Ukrainians venturing into villages, towns and cities across the country on Sunday with potentially deadly consequences.

The battle lines are thus drawn as Easter Sunday approaches. On this holiest of holidays in the Orthodox calendar, followers of the Orthodox Church of Ukraine will mostly be celebrating at home, perhaps while enjoying traditional holiday treats ordered online. Meanwhile, many adherents of the Russian Orthodox Church in Ukraine will disregard bans on large public gatherings and flock to their churches to mark the festivities. In the fight against the pandemic, they will chose piety over patriotism. It is a choice that says much about the relative values of the two main Orthodox churches currently struggling for the soul of Ukraine.

Ukraine has recently marked one year of Orthodox independence. The country’s religious landscape has yet to change dramatically, but the significance for Ukraine’s nation-building journey cannot be overstated.

Image: A health worker and members of the Ukrainian National Guard pictured at the entrance of the Kyiv Pechersk Lavra Monastery. The monastery complex was closed by Kyiv city officials on April 13 after it emerged as coronavirus infection hot spot. REUTERS/Valentyn Ogirenko