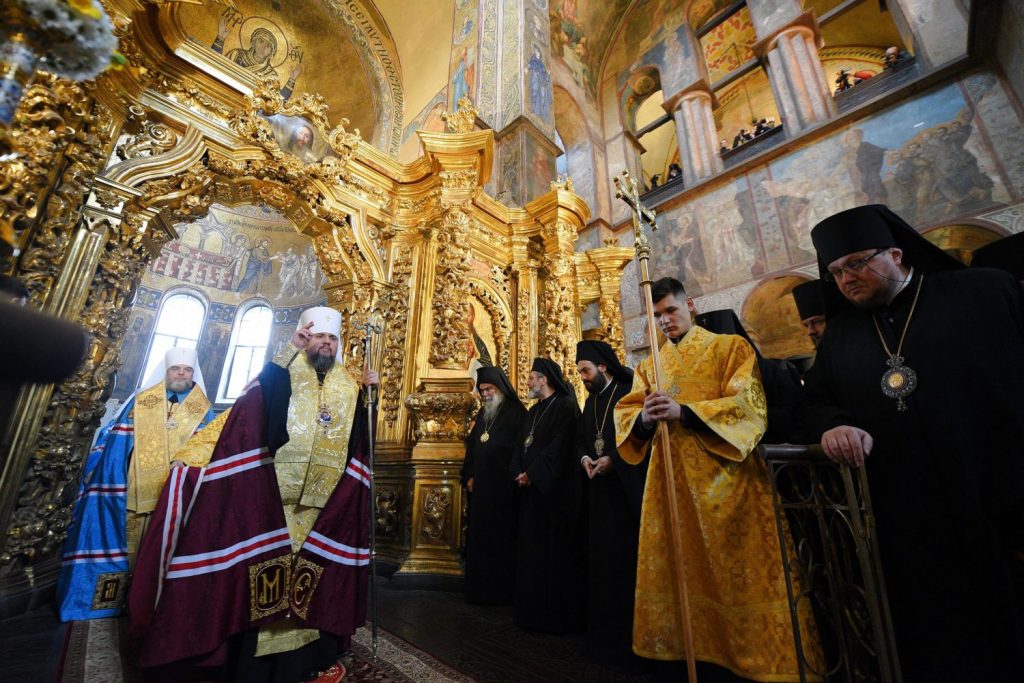 History moves fast in today’s Ukraine. Driven on by an undeclared war with Russia that is about to enter its seventh year, Ukraine is currently shedding centuries of imperial baggage and emerging from obscurity as a genuinely independent nation. This is sending ripples of geopolitical turbulence across the wider region and has plunged the entire world into a new Cold War. However, the epicenter of the unfolding historical drama remains inside Ukraine itself. The sense of upheaval and national awakening is evident throughout Ukrainian daily life, from politics and the economy to culture and identity.

Among the many momentous developments to rock Ukraine since 2014, few have carried greater symbolic significance than the establishment of an independent Orthodox Church of Ukraine. This landmark event took place in early 2019 with the granting of autocephaly, or self-governing status, by the Ecumenical Patriarch of Constantinople, Bartholomew I. For centuries, Ukraine’s Orthodox faithful had previously fallen under Moscow’s jurisdiction. The Soviet collapse saw the rise of a Kyiv Patriarchate to rival the Moscow Patriarchate, but this Ukrainian upstart lacked international recognition. The Constantinople Patriarch’s 2019 intervention completely transformed this picture and gave Ukraine an internationally acknowledged national Orthodox Church of its own.

One year on, the Orthodox Church of Ukraine is firmly established at home and gradually gaining ground internationally. However, much like Ukraine itself, the new Church remains a work in progress that faces enormous challenges from a Russian establishment unwilling to accept the loss of its traditional dominance in a country that many in Moscow continue to view as an integral part of the Russian heartlands.

“This is a young Church with ancient roots,” commented the Orthodox Church of Ukraine’s Metropolitan Epiphaniy during an anniversary service at Kyiv’s venerable St. Sophia Cathedral in early February. Metropolitan Epiphaniy went on to describe Ukraine’s newly independent Orthodox Church as the continuation of an ancient lineage stretching all the way back to the conversion of the Slavs in late tenth century Kyiv. This echoes ongoing efforts to attribute similarly deep political foundations to today’s Ukrainian state.

St. Sophia Cathedral was a particularly apt setting for such bold proclamations. Looming over the congregation were thousand-year-old frescoes depicting the Kyiv Rus royals who first brought Christianity to Ukraine. These secular icons are regarded as the direct ancestors of the modern Ukrainian state. Like so much else in Ukraine’s reemerging national story, they are also coveted by modern Russia, which claims them for its own foundation myth. As today’s Ukrainians fight to establish a national narrative of their own, this inevitably places them on a collision course with their northern neighbors.

The issue of Orthodox independence has long been a highly politicized aspect of Ukraine’s post-Soviet nation-building efforts. In the years following the 2004 Orange Revolution, President Yushchenko sought but failed to secure autocephaly for the country. When it finally did come a decade later, the breakthrough was widely attributed to President Poroshenko, who invested considerable political capital in his wooing of the Constantinople Patriarch and sought to use this success as a springboard to reelection.

Other factors prevented Poroshenko from earning a second presidential term, but the importance of his achievement should not be underestimated, even if this is not immediately apparent from the available data. In the year since the Orthodox Church of Ukraine was established, around 600 parishes have left the Moscow Patriarchate and joined the new Church. This is a relative drop in the ocean compared to the estimated 12,000 Ukrainian parishes that continue to owe their loyalty to the Russian Orthodox Church. By comparison, the new Orthodox Church of Ukraine currently has a total of around 7,000 parishes. However, counting parishes is not an exact science, with many featuring tiny rural congregations and others existing on paper only.

Perhaps more tellingly, a nationwide poll published by the respected Razumkov Center think tank on February 3 found that over one-third of Ukrainians (34%) now identify as members of the newly established Orthodox Church of Ukraine, while around 14% follow the Moscow Patriarchate. Meanwhile, over a quarter of respondents (27.6%) defined themselves simply as Orthodox Christians without choosing any particular branch and affiliation.

As this survey suggests, the move away from the Moscow Patriarchate is a long-term trend that predates the relatively recent advent of autocephaly. More than any other single factor, Vladimir Putin’s six-year undeclared war against Ukraine has been disastrous for the Russian Orthodox Church’s fortunes in the country. Members of the Moscow Patriarchate clergy have been accused of actively supporting Russian military aggression in Ukraine, while numerous incidents of priests refusing to perform religious services for Ukrainians killed defending their country have sparked widespread public anger and dismay. Until 2014, church affiliation had been a non-issue for many Ukrainians, but the conflict has transformed it into yet another front line in the bitter geopolitical divorce between Russia and Ukraine.

Despite the setbacks of recent years, the Russian Orthodox Church will likely remain part of Ukrainian society for many decades to come. It continues to control the majority of Ukraine’s most important religious sites and has deep, multi-generational roots in Ukrainian society that are strong enough to withstand the current political storms. Nevertheless, the Orthodox Church of Ukraine has also demonstrated over the past year that it is capable of putting down roots of its own. As well as consolidating its position domestically, Ukraine’s new Church has been officially recognized by the Greek Orthodox Church and the Patriarchate of Alexandria. During anniversary events, Metropolitan Epiphaniy said he expected further recognition from within the Orthodox world in the coming months. Efforts are also underway to engage with wider Ukrainian society through the creation of the Mazepa Foundation, an initiative backed by the Orthodox Church of Ukraine that will support good causes and dialogue across the country.

Perhaps the most important role played by the Orthodox Church of Ukraine is as a symbol of Ukrainian statehood. Prior to autocephaly, followers of Ukraine’s Kyiv Patriarchate were often derided as members of an unrecognized sect. This mirrored similar attacks on Ukraine as a whole, with the country’s lack of historical pedigree as an independent nation brandished by opponents as evidence that it was somehow less worthy of the respect due to a sovereign state. In this context, the international recognition Ukraine’s new Church received in 2019 was a significant step forward in Ukraine’s long nation-building journey. It did not bring Russian religious influence in the country to an end, but it did send a message that Ukraine was an independent nation with a national church of its own.

Peter Dickinson is Editor of the Atlantic Council’s UkraineAlert blog.

Ukrainian President Volodymyr Zelenskyy’s New Year 2020 address to the nation was a bold call for unity at a time of acute sensitivity towards issues of national identity – but is Ukraine ready to embrace diversity with country still facing an existential threat from ongoing Russian aggression?

Image: The head of the Orthodox Church of Ukraine, Metropolitan Epiphaniy, pictured in Kyiv's St. Sophia Cathedral during a prayer service to mark the Church's first anniversary. February 3, 2020.