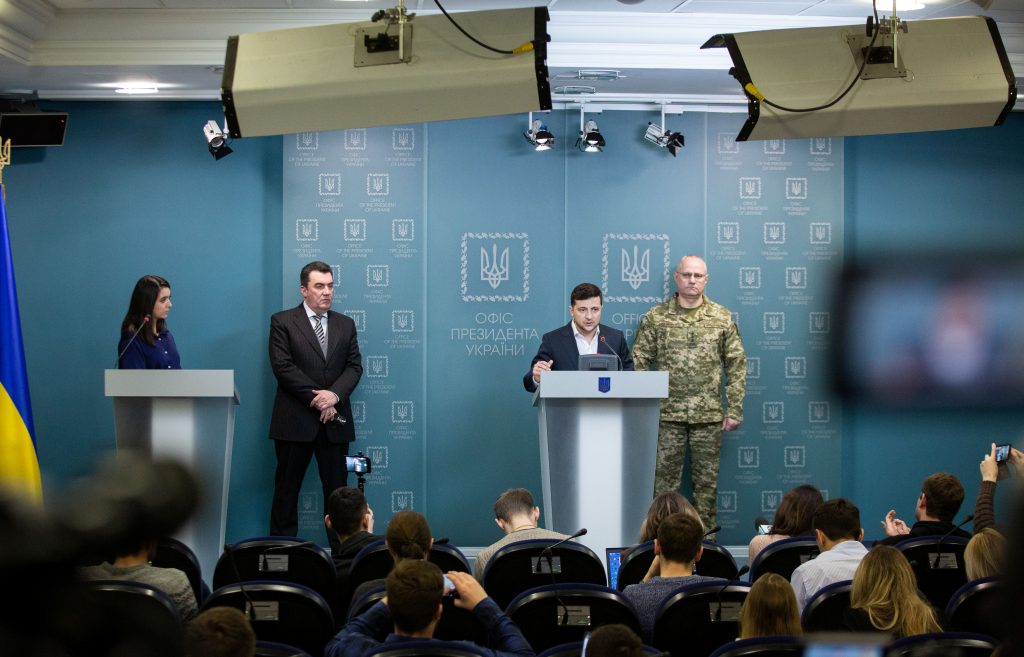 Russian hybrid forces in eastern Ukraine launched a series of artillery bombardments and localized advances early on February 18, sparking some of the most intense engagements in recent years along the largely static front lines of the conflict. The Ukrainian military reported one soldier killed and four injured in the brief but fierce clashes, which some observers likened to the height of the fighting in summer 2014. Ukrainian President Volodymyr Zelenskyy branded the short-lived offensive an attempt to disrupt the peace process and vowed to press on with his efforts to end the war.

Zelenskyy and his Russian counterpart Vladimir Putin are tentatively scheduled to meet in spring 2020 for a fresh round of Normandy Format talks. However, with fundamental differences between the two leaders over the implementation of the 2015 Minsk Accords, it remains unclear whether there is sufficient common ground to warrant a summit. Indeed, this latest spike in hostilities has served to underline the failure of the ceasefire agreement reached during the last Normandy Format meeting in December 2019. How will Russia’s February 18 military escalation affect the prospects for peace in Ukraine?

Michael Carpenter, Managing Director, Penn Biden Center; Senior Fellow, Eurasia Center, Atlantic Counci: The key thing to remember about this latest offensive is that it’s not the work of some sort of mythical “spoilers.” This happened as a result of Russian officers directing their proxy forces to attack Ukrainian positions. It underscores that Putin can’t be trusted with any sort of road map for peace until he implements the very first and most important point of the Minsk protocols: a ceasefire. One command from Putin would stop this aggression instantly, and it’s very telling that after six years of war this command has never been given.

Alyona Getmanchuk, Director, New Europe Center: This latest escalation makes the prospect of peace even more Illusive. President Zelenskyy’s overwhelming public support and one-party parliamentary majority make his presidency a unique opportunity for Putin to stop the war. Instead, the Russian leader seems intent on continuing with his old tactics of periodic escalations. By doing so, he is undermining Zelenskyy domestically and eroding the Ukrainian leader’s credibility as the number one promoter of peace negotiations. How can Zelenskyy sell the idea of peace talks with Russia to the Ukrainian public if the Russian side doesn’t demonstrate a willingness to make significant steps towards a settlement? How can Zelenskyy explain the logic of the military disengagement process if troops are then killed at exactly the same points where he recently ordered the withdrawal of Ukrainian forces in line with Putin’s demands? How can he advocate for another Normandy Format summit if Putin refuses to implement the ceasefire agreement reached at the previous meeting? It was Ukrainian society that gave President Zelenskyy a free hand to negotiate peace, and it is Ukrainian society that will deprive him of this mandate if the public decides he is being made to look ridiculous by Putin.

Brian Bonner, Chief Editor, Kyiv Post: This escalation is the most vivid reminder in a while that Russia’s war is still on and, no matter how much Ukraine wants peace, it must defend its territory from further incursions. Maybe this umpteenth “wake-up call” about the Kremlin’s intentions to destroy Ukraine as a nation will halt the current appeasement drive. Wishing the war away won’t make it happen. Western leaders need to reverse course and toughen sanctions on Moscow. Ukraine must win and regain all its territories before international law is respected again.

Michael Bociurkiw, Global Affairs Analyst: That Russian-backed forces launched fresh attacks that could derail the peace process comes as little surprise. Russian President Vladimir Putin has always regarded his proxy forces in the Donbas as a convenient lever to turn the heat up or down on the Ukrainian government as he pleases. No one except Putin himself knows exactly why he has chosen to do so now, but it could indicate a desire by the Kremlin to test the reaction of Ukraine’s allies, namely Europe and the United States. The flair-up occurs just a few days after the release of a controversial 12-step peace plan for Ukraine penned by a group of American, European and Russian former government officials and think tank experts. This Kremlin-friendly plan appears to have been an attempt to persuade the West to loosen sanctions on Russia for the annexation of Crimea and occupation of the Donbas. Ukrainian officials forcefully pushed back against the plan. This could have prompted the latest escalation from the Russian side. Domestically, Ukrainian President Volodymyr Zelenskyy’s handling of the peace process is being carefully watched by supporters and opponents alike. Any major misstep could seriously dent his popularity.

Peter Zalmayev, Director, Eurasia Democracy Initiative: During his first months in office, President Zelensky received a series of Russian carrots in the form of two prisoner exchanges and a relatively painless summit meeting in Paris. Buoyed by this apparent progress, Zelenskyy recently channeled George W. Bush and claimed to have looked deep into Vladimir Putin’s eyes and seen a desire for peace. The timing of this comment was highly unfortunate. Shortly afterward came the inevitable stick, in the form of artillery barrages and a series of advances by the occupying forces along the front lines in eastern Ukraine. This resulted in what was probably the heaviest fighting of the past two years. Zelenskyy’s eager rhetoric betrays his political naivety and his failure to learn from the experience of others. Any sincerity he may detect in Putin is the product of the Russian leader’s KGB training. It is meant to lull his adversaries into careless confessions and hasty concessions. In reality, the latest escalation in eastern Ukraine once again demonstrates that Putin will only make peace on terms unacceptable to Ukraine if it wishes to remain a sovereign state and chart a course independent of Russia.

Vladislav Inozemtsev, Director, Centre for Post-Industrial Studies (Moscow): This escalation in eastern Ukraine should be taken seriously since no one believes the so-called Luhansk People’s Republic acts without the Kremlin’s knowledge. The fighting, which was widely reported in the Ukrainian media but almost entirely ignored by the Russian media, can be seen as a direct continuation of the recent phone call between President Zelenskyy and President Putin, in which the Russian leader reportedly pressed his counterpart on whether he intends to implement the Minsk agreements or not. This would certainly fit with Russian media coverage reflecting Putin’s deep dissatisfaction over the current direction of the peace process, and brings to mind his famous 2018 quote: “Nobody wanted to listen to us then, so listen to us now.” This new escalation creates the impression that the Kremlin is ready to take increasingly radical steps in order to force its “partners” to listen. That may apply to both Kyiv and Minsk, given current Belarus resistance to Russia’s integration overtures.

Taras Kuzio, Professor, National University of Kyiv Mohyla Academy: This is not an attempt to end the “peace process” because, as the December 2019 Normandy Format summit demonstrated, there is no genuine “peace process”. There are only unilateral steps made by President Zelenskyy such as troop withdrawals, agreeing to the Steinmeier Formula, and floating the idea of joint Ukrainian-DLNR border patrols. At the same time, there are no commensurate steps from Russia. Putin is manipulating Zelenskyy’s arrogance and his desire to show that he is better than his predecessor Poroshenko. Military escalations allow Putin to maintain the pressure on the Ukrainian leader and increase skepticism over Zelenskyy’s ability to deliver peace. Meanwhile, Putin’s goal remains the same as it has been since 2014, which is to secure special status for occupied eastern Ukraine and have the regions then serve as Russia’s Trojan Horse.

Volodymyr Yermolenko, Chief Editor, UkraineWorld.org: Even before this escalation, a number of representatives in occupied eastern Ukraine had begun arguing that the Minsk process doesn’t work. Previously, they had avoided public criticism of the Minsk agreements. This change may be a reaction to recent talk about the “flexibility” of Minsk, as expressed during December’s Normandy Format summit by Zelenskyy and Merkel but fiercely opposed by Putin. With this escalation, Putin could be sending a message that there is no flexibility regarding Minsk. Instead, Russia will only accept peace on its own terms. This means local elections with eastern Ukraine still under Russian occupation and without Ukrainian control of the border. Another motivating factor behind Russia’s decision to escalate may be the desire to weaken Zelenskyy domestically. The Ukrainian President has created exaggerated expectations regarding the prospects for peace and this leaves him vulnerable. If Zelenskyy fails to deliver peace, he will be weakened. This weakness could help polarize Ukrainian society, which suits Russia.