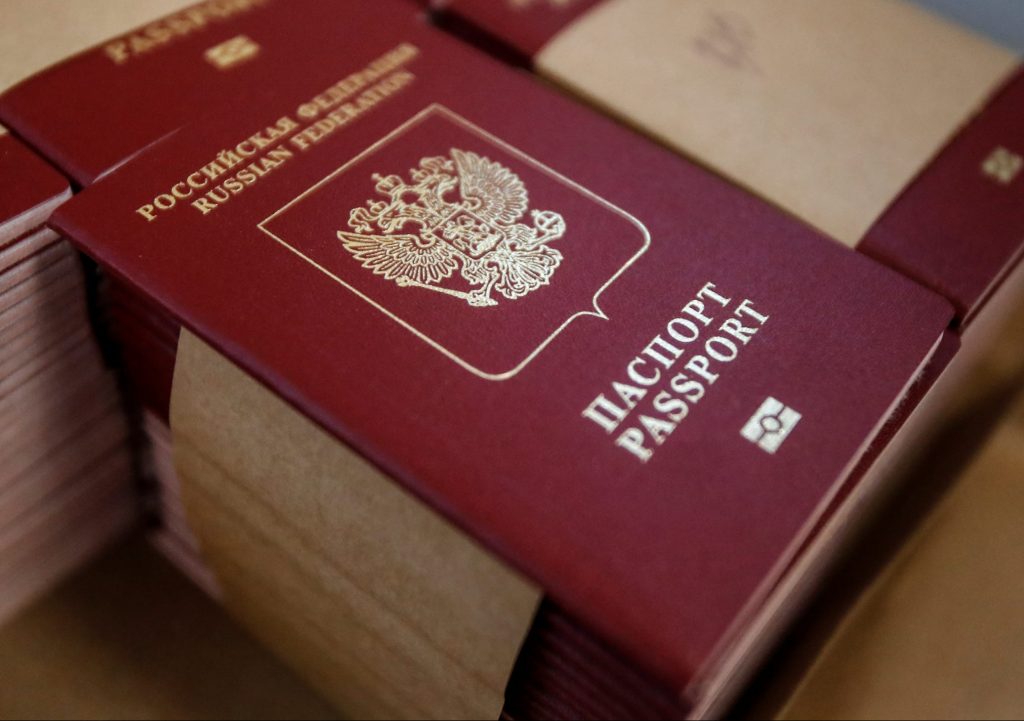 The international community has expressed growing alarm in recent weeks over a major Russian military build-up along the Ukrainian border. Fears of an imminent escalation in the simmering seven-year war between Russia and Ukraine have been further fueled by the menacing rhetoric coming out of the Kremlin, with Moscow officials accusing Kyiv of preparing an offensive of its own and predicting grave consequences for Ukrainian statehood.

It is easy to understand why footage of the Russian Army massing so close to Ukraine has unnerved Western leaders. However, the decisive deployment in this post-Soviet conflict may have already taken place, far away from the front lines and with remarkably little fanfare.

For the past two years, Moscow has been slowly but steadily distributing Russian passports to Ukrainians living in the regions of eastern Ukraine currently under Kremlin control. During this period, over 650,000 Russian passports have reportedly been issued among an unconfirmed overall population that is believed to number several million.

This effort to transform occupied eastern Ukraine into a “passport protectorate” gives a clear indication of Russia’s long-term objectives in its war with Ukraine. It may also provide the best clue as to what we can expect from the Kremlin’s present bout of saber-rattling.

In the past few days, statements from a number of senior Kremlin aides have underlined the strategic importance of Russia’s passport distribution policies in eastern Ukraine. Speaking in Moscow on April 8, President Putin’s deputy chief of staff Dmitry Kozak warned that Russia “would be forced to come to the defense” of Russian citizens in eastern Ukraine if fighting escalated.

Kozak, who also serves as Russia’s representative in peace talks with Ukraine, added that the resumption of large-scale military operations would signal “the beginning of the end of Ukraine.” The following day, Putin’s press secretary Dmitry Peskov reiterated Kozak’s pledge to protect Russian citizens in eastern Ukraine in the event of an escalation. Neither official elaborated on the fact that this population of Russian citizens is the result of deliberate passport policies implemented by the Kremlin since 2019.

Kozak and Peskov’s comments appear to confirm widely held fears that Russia intends to use its newly minted citizens in eastern Ukraine in order to justify open military intervention in regions it has informally occupied for the past seven years.

In spring 2014, Russian operatives and local collaborators created the so-called Donetsk and Luhansk People’s Republics in eastern Ukraine’s Donbas region. Their efforts were part of a far broader Kremlin campaign to undermine Ukrainian statehood by orchestrating separatist uprisings throughout southern and eastern Ukraine. While most of these attempts were thwarted, the “separatist republics” in the Donbas have remained firmly under Russian control ever since.

So far, Russia has felt obliged to maintain the fiction of bystander status in the conflict. However, with Ukraine unwilling to accept unfavorable Russian peace terms and the international community proving largely toothless in its efforts to curb Kremlin aggression, Moscow could now be about to use the passport pretext in order to up the ante and make its involvement official.

In a worst-case scenario, recent statements from Moscow about the need to defend Russian citizens in eastern Ukraine may foreshadow plans to incorporate the Donbas region into the Russian Federation via an annexation similar to the 2014 takeover of Crimea. However, this would entail major costs for the Kremlin with limited benefits. After all, the regions in question are already under Moscow’s control and eastern Ukraine does not excite Russian public opinion in the same manner as Crimea.

A far more realistic scenario would see the Russian military entering occupied eastern Ukraine in the guise of peacekeepers in order to protect the large local population of Russian citizens. Once in place, this “peacekeeping force” would be almost impossible to dislodge.

There is nothing new about the weaponization of Russian passports. On the contrary, the strategic granting of Russian citizenship has been an instrument of Russian foreign policy since the late 1990s.

For more than two decades, Russian passports have been used to help strengthen Moscow’s position throughout the post-Soviet world, and have played a particularly prominent role in efforts to bolster pro-Kremlin separatist movements in former Soviet republics such as Moldova and Georgia.

In Ukraine, the distribution of passports helped pave the way for Russia’s 2014 seizure of Crimea. Over the subsequent seven years, passport policies have been dramatically expanded as part of efforts to tighten Moscow’s grip on the Ukrainian peninsula.

Russia first unveiled its passport initiative for occupied eastern Ukraine in April 2019, just days after the election of Volodymyr Zelenskyy as president of Ukraine. The move was seen as a direct snub to Ukraine’s new leader and a signal that Russia did not regard Zelenskyy’s landslide victory as an opportunity to negotiate a compromise peace. On the contrary, the move seemed tailor-made to emphasize Moscow’s intention of maintaining its grip on eastern Ukraine for the foreseeable future.

When the distribution of Russian passports in eastern Ukraine was first announced, many warned of the ominous implications for future Kremlin interference. Those predictions are now beginning to look perilously close to the mark.

Since the start of the current year, at least 25 Ukrainian servicemen have been killed as Russia has dialed up the violence along the front lines in eastern Ukraine following a period of relative calm. With tensions suitably heightened and the might of the Russian military poised in position just across the border, all the Kremlin now requires is an attention-grabbing incident in the occupied east to trigger Russia’s official entry into mainland Ukraine. This would mark a dramatic escalation in the seven-year conflict between the two nations, with potentially dire security consequences for the Black Sea region and the whole of Europe.

There is no guarantee that the Kremlin plans a spring 2021 offensive, of course. Indeed, many observers including Ukraine’s President Zelenskyy maintain that the immediate objective is to menace Ukraine and test the reactions of the new Biden administration. Nevertheless, recent statements by senior Putin regime figures make clear that Moscow interprets its passport ploy as an open-ended invitation to intervene in east Ukraine.

The international community cannot afford to wait and see what Russia’s true intentions are. Instead, Ukraine’s Western partners must inform Moscow as a matter of urgency that they do not regard the distribution of passports as a valid excuse for acts of international aggression. US, UK, and EU leaders should agree on a comprehensive and consequential list of additional sanctions that will be imposed in the event of a Russian offensive, irrespective of any disingenuous claims to be acting in defense of Russian citizens.

The media also has a crucial role to play in exposing Putin’s cynical passport politics. Far too often since 2014, international reporting on the Russo-Ukrainian War has amplified Kremlin disinformation and failed to hold Moscow to account. These shortcomings were on display once again last week, with the BBC and Reuters among the many outlets to quote Kremlin officials on the issue of defending Russian citizens while making no attempt to identify these “Russian citizens” as pawns created for the express purpose of advancing Kremlin interests in Ukraine. This is deeply misleading and risks legitimizing Russian aggression.

The current international focus on Ukraine will not last forever. If no Russian offensive materializes in the next few weeks, attention will shift elsewhere and Europe’s only active conflict will drop out of the headlines once again. However, the threat of Russian passport imperialism will continue to hang over Ukraine indefinitely. Unless it is addressed, this issue will be periodically exploited at the Kremlin’s convenience, serving as a tool to intimidate Ukraine and destabilize the wider region.

Image: Since 2019, Moscow has distributed hundreds of thousands of Russian passports to Ukrainians living the occupied east of the country. Kremlin officials are now vowing to defend these Russian citizens if necessary. (REUTERS/Maxim Shemetov)