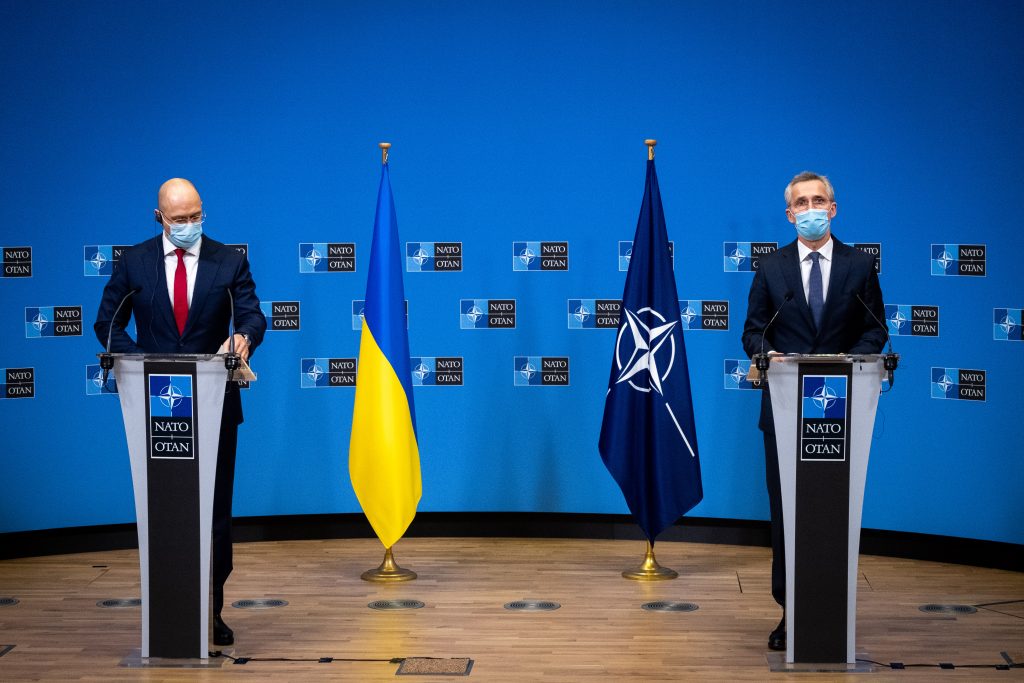 In a recent interview with Axios on HBO, Ukraine’s President Volodymyr Zelenskyy said he would like to ask US President Joe Biden, “Why is Ukraine still not in NATO?”

President Zelenskyy’s question generated a lot of debate and ended up reaching a wide audience. Ever since, Ukrainian journalists have been asking me, “So why is Ukraine still not in NATO?” As I answered this question for the third or fourth time, I realized how satisfied I actually was with the way this discussion is evolving.

Why, indeed, is Ukraine not in NATO?

Today’s Ukraine is not only a security recipient, but a security donor in its region. Ukraine has been successfully countering Russian aggression for almost seven years now, protecting not only itself but a wider region between the Baltic and Black Seas. Ukraine has gained invaluable experience deterring Russian aggression on the traditional military battlefield and in the realm of hybrid warfare, which extends from cyber to disinformation and beyond. These factors would appear to make Ukraine a strong candidate for NATO membership.

That is the rational side to answering President Zelenskyy’s question. However, there is also an emotional side to consider. Perhaps the best way to understand this dialectic is by adopting a neuroscientific approach and exploring both the rational and the emotional approaches to Ukraine’s future membership in NATO.

Any rational analysis would include the need to further elevate the interoperability of the Ukrainian armed forces with their NATO colleagues. It would involve completing the implementation of NATO standards and continuing with the broader process of Euro-Atlantic reforms.

This is a challenging to-do list, but all of these stated objectives are absolutely achievable. Indeed, Ukraine has already made considerable progress along this path since 2014, and the process has recently gained added momentum in many areas.

The emotional side of the equation is far less straightforward. A combination of myths and fears immediately activates whenever the words “Ukraine” and “NATO” appear in the same sentence. Frequently, this hurricane of emotions overrides all logic or reason. Unlike the entirely rational to-do list, this emotional response is dangerously misleading and must be addressed accordingly.

In recent years, Russia has combined military operations with disinformation campaigns that are designed to justify its aggressive actions. A key theme has been the idea of a fundamentally defensive Russia forced to protect its borders from “NATO expansion.”

This entire narrative is based on long-debunked claims of a “pledge” made by the West to the Soviet Union not to expand NATO eastwards following the fall of the Berlin Wall. According to the Russian version of events, US Secretary of State James Baker promised Soviet leader Mikhail Gorbachev in 1990 that NATO would not move east if the USSR allowed the reunification of East and West Germany.

Archive documents prove that no such pledge was ever made. Even Gorbachev himself stated in October 2014 that the topic was not discussed at the time.

This makes sense. In early 1990, nobody would have considered the possibility of any Warsaw Pact countries even theoretically aspiring to NATO membership. Instead, the only discussions on NATO enlargement referred specifically to East Germany.

This somewhat primitive yet entirely characteristic deception has allowed Moscow to promote the myth of a duplicitous and expansionist NATO. Meanwhile, Russia is conveniently cast in the role of victim, forced to protect itself by occupying the lands of its neighbors. Unfortunately, many people around the world continue to be taken in by this hoax.

The myth of a besieged Russia gallantly defending itself against expansionist NATO forms a central part of the broader argument that the Western world should seek to avoid “provoking” Russia. One key lesson of the 2000s and 2010s is that nothing invites Kremlin aggression more than calls “not to provoke” Russia.

In reality, Moscow has always been good at selling fear. We should listen to Russia’s signals carefully, but we must not allow those signals to guide our hand on strategic decisions. In neuroscientific terms, Russia has always stimulated the limbic emotional system of NATO allies, while Ukraine has appealed to their frontal rational lobes. The limbic system is important, but it is the frontal lobes that move mankind forward.

At a summit in Bucharest in 2008, NATO made clear that Ukraine and Georgia will become NATO members one day. The alliance also supported both countries’ applications for Membership Action Plans (MAPs) and agreed this would be the next step towards eventual membership.

Thirteen years have now passed since the Bucharest summit, but Ukraine and Georgia are still waiting.

The elephant in the room has always been Russia. Back in 2008, it seemed like a good idea to try and calm the Russian elephant, but it is now clear this was an error.

Since the Bucharest summit in 2008, Ukraine and Georgia have both been militarily attacked by Russia, losing many lives and considerable territory. This aggression has been contained, but at a tragically high cost. Ukraine has lost over 14,000 lives while defending itself against Russian attack.

Neither country has bowed to Russian aggression. Nor have they abandoned their aspirations to become NATO members. On the contrary, both have implemented numerous reforms in order to bring them closer to the alliance, and have achieved the status of NATO Enhanced Opportunities Partners. When the current situation is viewed from this long-term perspective, it is only natural that so many Ukrainian journalists ask me why NATO has not yet given Ukraine a MAP.

I am deeply grateful to NATO Secretary General Jens Stoltenberg for his clear reminders that “No outside country has the right to veto, and the time of spheres of influence is over.”

During an early February press conference at NATO HQ with Ukrainian Prime Minister Denys Shmyhal, Secretary General Stoltenberg noted that “NATO’s door remains open.” He recalled that back in 2008, the alliance made a decision on Ukraine’s membership, and underlined that NATO continues to stand by that decision. This is important, but it seems high time for all NATO members to take the long-awaited step forward and grant MAPs to both Ukraine and Georgia.

Let’s not hold this decision hostage to myths and fears which cloud our strategic thinking and distort our reasoning.

Trust between the alliance, Ukraine, and Georgia has been steadily growing. The latest example was my participation, along with my Georgian counterpart David Zalkaliani, in NATO’s recent closed ministerial meeting on security in the Black Sea.

It is worth emphasizing that Ukraine has also recently speeded up its own domestic Euro-Atlantic reforms. In particular, last month the Ukrainian parliament passed a first reading of the long-awaited reform of the Ukrainian Security Service in accordance with NATO recommendations. Growing trust between the special services of Ukraine and NATO member states, along with increasing interoperability between armed forces, is vital. We believe it is time for additional steps in this direction.

Ukrainians understand that a Membership Action Plan is not the same as membership, but it would nevertheless be a clear signal that the idea of future NATO membership is not merely a declaration. This step would prove that the alliance upholds its own commitments made in Bucharest in 2008. It would send a clear signal that NATO is committed to defending the values of democracy and freedom, to which the right of nations to choose their own future is fundamental. Furthermore, the success of Ukraine and Georgia would demonstrate to others that freedom and democracy are worth fighting for.

Ukraine and Georgia matter to NATO. Even in their current status as partners rather than members, they already de facto defend the alliance’s eastern flank and play a crucial role in the security of the Black Sea region.

I welcome the renewed focus on Ukraine’s NATO aspirations following President Zelenskyy’s recent comments. Next time you hear somebody ask, “Why is Ukraine still not in NATO?”, try to sidestep all the myths and approach the question rationally. In the final analysis, the only reasonable response is that Ukraine should indeed be granted a MAP and will eventually join the alliance. This is not neuroscience.