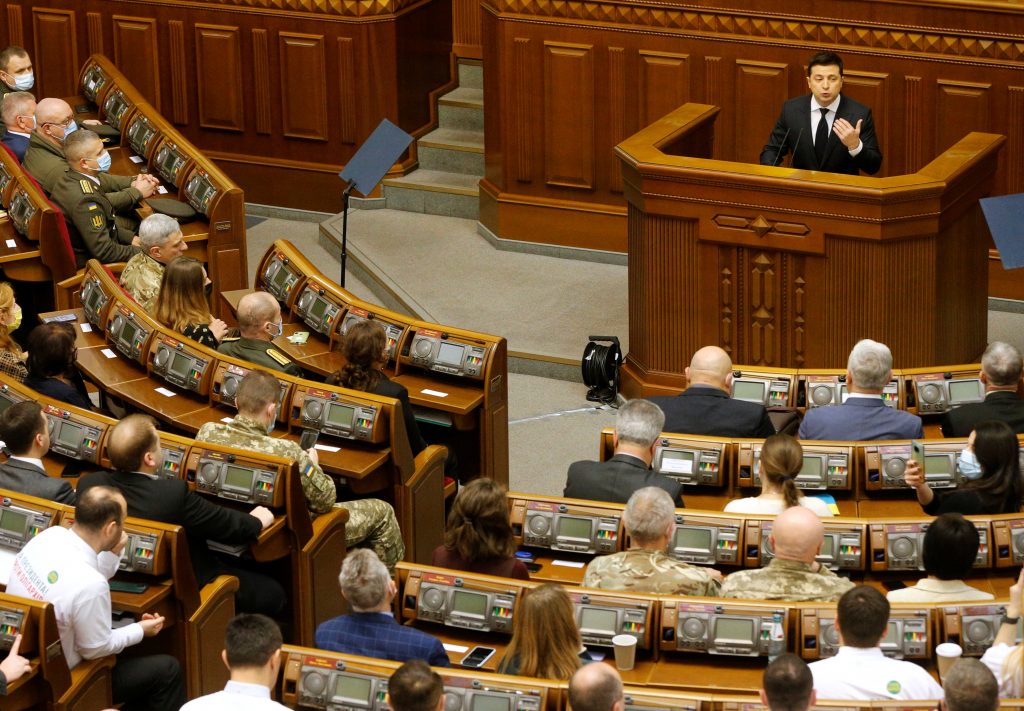 Faced with a new campaign of Kremlin intimidation and saber-rattling, it is essential that Ukraine gets the full support of the Euro-Atlantic Community in defending its independence. Commitments of diplomatic and military support from the US, UK, France, Sweden and others are therefore welcome.

It is also important to acknowledge that Ukraine would be more resilient in the face of Russian aggression today if it had gone further in creating a dynamic economy, building efficient institutions, and ending corruption. In addition to strengthening Ukraine’s military forces, the question of political and economic reform needs renewed and urgent attention.

The desire of the Ukrainian people for change is not in any doubt, yet the country has remained subject to “state capture” with powerful elites able to co-opt the policies and institutions of the state for their own private ends through the control of revenue flows, media assets, and corrupt public officials. Successive governments have come to power in Kyiv with mandates to end oligarchic control, but on each occasion, momentum for reform has stalled before irreversible systemic change could be achieved.

This cycle of hope followed by frustration and disillusionment is in danger of being repeated once again under President Zelenskyy. When he was elected as a political outsider in 2019, Zelenskyy seemed to offer the prospect of a decisive break with the past. In office, however, he has begun to look much like his predecessors.

Reformist intentions have too easily given way to a centralizing instinct that weakens institutions and allows state capture to continue. Independent-minded officials have been removed from office. Laws have been announced promising greater accountability and an end to corruption, but which fall short on closer inspection.

Does President Zelenskyy want to achieve genuine change or just the appearance of change?

The current draft bill on reform of the Ukrainian Security Service (SBU), which is meant to end its jurisdiction to investigate economic crimes, in fact gives it the power to continue doing so under the heading of national security. This leaves ample scope for corruption to continue, including the ability of predatory interests to commission cases against legitimate businesses.

The new anti-oligarch bill similarly gives too much discretion to the executive to decide who is and who is not an oligarch. Oligarchy as a system of power will therefore survive even if one or two out of favor oligarchs find life a little less comfortable; especially if they end up replaced by new oligarchs more acceptable to Zelenskyy and his entourage.

Another problem is the endless recycling into positions of influence of officials steeped in the bureaucratic malpractices of the past.

For example, significant concern has been expressed about the recent appointment of Andriy Naumov to the Prosecutor General’s Office. Naumov was dismissed as head of the SBU’s internal security department earlier this year following allegations that he used his position to facilitate smuggling and put pressure on businesses. Previously he served in the Prosecutor General’s Office for twelve years, including during the worst excesses of the Yanukovych era. His return will again give him jurisdiction over economic crimes.

Zelenskyy’s appointment of Oleh Tatarov as his Deputy Chief of Staff last year has also raised eyebrows. Tatarov was a senior official in the Ministry of the Interior under Yanukovych and has been accused of trying to cover up police brutality against protesters during the Euromaidan Revolution. From his office at the heart of the Zelenskyy administration, he once more wields authority over sensitive areas of policy including law enforcement, anti-corruption, human rights, and relations with the Prosecutor General’s Office.

There are also concerns over the awarding of broadcasting licences. In recent weeks, one of two FM radio licences allocated in the Kyiv area was granted to Nikolay Bagrayev, a former Party of the Regions parliamentarian who voted for Yanukovych’s notorious “dictatorship laws” in 2014.

One reform that might make a significant difference would be the establishment of an independent process of integrity screening for all senior officials involved in prosecution, law enforcement, and the awarding of public contracts. The idea would be to supplement the passive requirement for asset declaration with an active and institutionalised process of vetting similar to the one used for nominations to the High Anti-Corruption Court.

To give the system added credibility, it could be designed and overseen by an international panel appointed by the EU or some other external body. Such a panel could also be used to vet the awarding of broadcasting licences and remove them from political control.

Increased engagement from Ukraine’s international partners is certainly needed. The IMF has done a lot to keep up the pressure for reform, and its latest staff-level agreement with Ukraine again highlights action to stamp out corruption and strengthen the rule of law as conditions for continued support. But the approach is often arms-length and too narrowly focused on economic outcomes rather than overall standards of governance. These problems cannot be solved at the technical level alone. They require heavyweight political engagement by government leaders.

The absence of such engagement partly reflects a weariness and ambivalence in some of the major EU capitals more than seven years after the start of the Ukraine crisis. The impulsiveness of the Trump administration followed by President Biden’s pivot to China means that US policy has also lost strategic focus.

This sense of drift is now being openly exploited by Russia as it seeks to undermine Ukraine’s sovereignty and gradually reassert its influence. The persistence of corruption and the networks of power that sustain it are as much of a long-term threat to Ukraine’s independence as the prospect of further military aggression from Moscow. It’s time that Ukraine and its Western allies responded accordingly.

Denis MacShane is the former UK Minister of Europe in the Tony Blair government. He witnessed the 2004 Orange Revolution and was an observer during Ukraine’s 2019 parliamentary elections. He writes on European politics and policy.