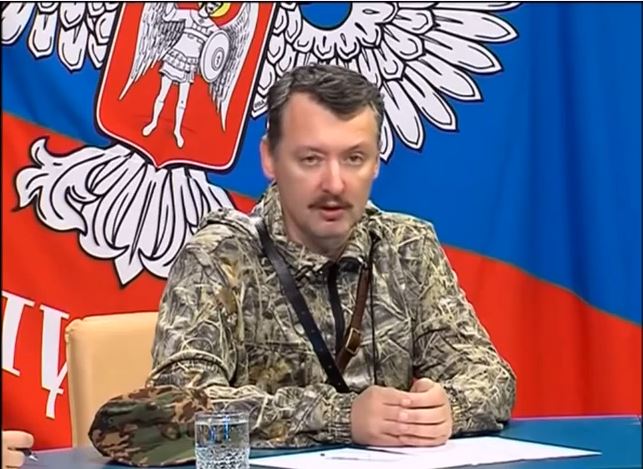 “The Shooter” is back. Colonel Igor Girkin, the career Russian intelligence officer who disappeared three months ago from his leading role in the Russian-sponsored war against Ukraine, has burst anew into Russia’s news headlines. He has given a spate of interviews in which he presses Russia’s government to step up direct military support for the two “people’s republics” it is backing in southeastern Ukraine.

Girkin, who uses the nom de guerre Igor Strelkov (“Igor the Shooter”), began his media campaign in October, speaking on TV networks, radio and internet media to push for a more aggressive Russian campaign in Ukraine. Girkin began his war in Ukraine secretively, as a leader of the unidentified “green men” who seized Crimea and towns in the Donbas region. Ever since Ukrainian intelligence identified him in May as a top commander in the war, analysts have debated the degree to which he has been a loyal Russian soldier carrying out direct Kremlin instructions or a member of a Russian nationalist community acting with tacit encouragement from Moscow to wage war in Ukraine. Wherever along that range Girkin falls, his reemergence provides a rallying point for extreme nationalists who are pushing President Vladimir Putin to seize as much as a third of Ukraine’s territory in a new military offensive.

Russia has moved dozens more tanks, armored personnel carriers and rocket-launchers into the parts of Donetsk and Lugansk provinces in a military buildup of its proxy forces, apparently for a new offensive, the Atlantic Council’s Adrian Karatnycky noted November 12. The Donetsk rebels’ prime minister, Aleksandr Zakharchenko, has vowed to re-take parts of that province that Ukrainian troops recovered in their summer offensive. But other hardline Russian nationalists are pressing Moscow to go much further—seizing much of southern Ukraine to open a land corridor to Russian-occupied Crimea and perhaps also to Transnistria, the Russian-controlled, militarized enclave in Moldova.

Girkin has repeated the assertion made by Putin to western leaders that Ukraine is not really a country. So, the officer told Neyromir TV last month, “Ideally the future would be the reuniting of all the Russian people—for Ukraine, Belarus and Russia to be one country.”

Girkin has described himself in interviews as a native Muscovite who fought for Russia in Transnistria in the 1990s, and then for Serbian forces in Bosnia.  He served with Russian forces fighting in Chechnya and retired from active duty service with Russia’s main intelligence agency, the FSB, at the end of March 2013, he says. He says he’s now a colonel in the reserves and led other Russian nationalist “volunteers” in helping Russia’s seizure of the Crimean Peninsula from Ukraine in February. He then moved to Donetsk province in April and became the defense minister of the “Donetsk People’s Republic,” commanding a militia in the provincial city of Slaviansk.

In August, Girkin and other Russian citizens were moved out of the visible leadership in the Donetsk rebel movement, and people actually from Donetsk were named in their places.  The less visible command of the rebel militias and security operations was consolidated somewhat under officials who may be more reliably under Moscow’s control than was Girkin. These include Vladimir Antyufeyev, a senior Russian intelligence officer who for years ran the Russian security operation in Transnistria.

Girkin’s new interviews have included criticisms of other leaders in the conflict that underscore the factionalization of those promoting it. Last month he accused Putin aide Vladislav Surkov of embezzling Russian government funds allocated to help local populations (and build support for Russia’s role) in South Ossetia, which Russian troops seized in 2008. Surkov is in charge of Russian aid money for Donbas, Girkin said, and is likely to do the same. In an interview released today by the Russian news website Gazeta (“Gazette”), he continues to criticize Surkov and voices “disappointment” in the three-month-old performance of Zakharchenko, the  Donetsk “prime minister.”

But the thrust of Girkin’s message is that Russia is not doing enough to take over eastern Ukraine. In a late-October press conference on Neyromir, one of Russia’s many Kremlin-loyal internet video channels, he announced the launch of a civic movement in support of Novorossiya, the tsarist-era name for a swath of southern and eastern Ukraine that extends well beyond the two provinces—Donetsk and Lugansk—now at war. Girkin, now dressed in a suit and tie, rather than the camouflage fatigues he wore in Ukraine, says his campaign is completely humanitarian, aimed at helping Ukrainians fighting with the pro-Russian forces and their families.

On the Moscow FM radio station Govorit’ Moskva, (“Moscow Speaking”) Girkin repeated the nationalist view that the population of eastern Ukraine is “Russian,” even if many of its people have distinctly Ukrainian roots or that they have “lost contact” with Russia. He calls on the Kremlin to give greater formal recognition and support to the pro-Russian “republics” there, saying that, “Russia is obligated to protect those, who have risen for her. It is simply obligated to do this.”

The station’s interviewer conducts a call-in survey of listeners, asking them “whether Russia should militarily support the separatists in Donbas.” Sixty-one percent who phone in within the next few minutes vote ‘yes,’ while 39 percent are opposed.  That appears to underscore the hardline nationalist audience that Girkin draws; an opinion survey published last week by the respected, Moscow-based Levada Center found that only 13 percent of Russians would support their relatives joining the war in Ukraine, and 68 percent insistent that they would do all possible to prevent family members from taking part.

Girkin conceded in an interview with Svobodnaya Pressa (“Free Press”), an internet news site, that in April he expected a Russian takeover of the Donbas region to go as smoothly and bloodlessly as Russia’s just-completed seizure of Crimea, in which Girkin had taken part. “I planned to do everything like in Crimea, I hoped that everything would go according to the Crimean scenario. We planned to help local leaders establish popular rule, conduct a referendum and unite with Russia.” In June, Girkin complained in Donbas that he was unable to persuade significant numbers of Donbas men, especially the young, to join the war against Ukraine. Asked now why the Donbas conflict has not resulted in a popular, pro-Russian uprising, he doesn’t quite manage an explanation. Of one thing he is sure: that Russia has failed to give it enough support.

Girkin may offer elements of an answer to how “official” were his missions in Ukraine this year. Svobodnaya Pressa chief editor Sergey Shargunov asks whether the Russian government directly ordered Girkin, as a reserve officer, to take up his war against the government in Kyiv. “No, of course not,” Girkin replies. As Girkin discusses his departure from Donbas in August, he speaks of his unhappiness that Russia then was negotiating a cease-fire in Donbas (albeit one that has merely limited, rather than halted, the fighting). Russian authorities pressured him to leave, he says, and “all I can say is that I did not resist very forcefully. After all, I am a Russian reserve officer and even if I don’t agree with a particular Russian political decision, I am after all obligated to obey it.”

Image: Russian Colonel Igor Girkin speaks at a press conference during the summer of 2014, while he served as "defense minister" of the Donetsk People's Republic, whose flag hangs behind him. (Donetsk TV screenshot)