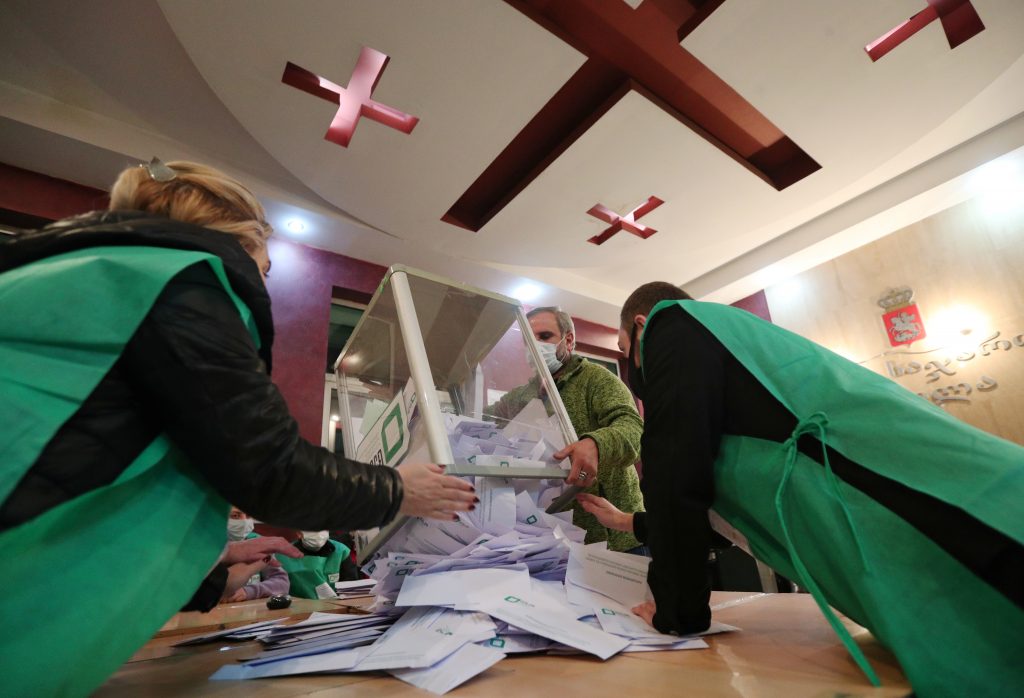 Georgia’s ruling party Georgian Dream secured a convincing victory in October 2 local elections that were widely seen as a referendum on the current authorities. However, the imprisonment of returning former president Mikheil Saakashvili on the eve of the vote leaves little realistic chance of an end to the political tensions that have plagued the country in recent years.

According to an EU-brokered agreement reached in April 2021 that aimed to resolve Georgia’s long-running political crisis, early parliamentary elections would be called for 2022 if Georgian Dream failed to secure at least 43% of the vote in Saturday’s local elections. Based on preliminary results from the country’s Central Election Commission, Georgian Dream comfortably passed this threshold with 46.7% of votes.

The election itself was somewhat overshadowed by the headline-grabbing arrest of Georgia’s ex-president Mikheil Saakashvili, who unexpectedly appeared in Tbilisi on October 1 following a seven-year exile from the country he had previously led for two presidential terms until 2013. Saakashvili was handed a six-year jail sentence during his absence on charges including abuse of office that he says are politically motivated.

Saakashvili’s incarceration has sparked international concern and looks set to deepen domestic divides within Georgian society as the country braces for a series of second round run-off votes in major cities including Tbilisi. The former president remains defiant and has called on supporters to mobilize ahead of coming run-off ballots, while the authorities have rejected calls for his release.

What are the implications of Georgian Dream’s election success and Saakashvili’s imprisonment?

John Herbst, Director, Eurasia Center, Atlantic Council: Not surprisingly, Georgia missed an opportunity last weekend to restore confidence in the country’s devotion to democracy. For years, the intense competition for influence between Georgian Dream and its principal opponents has not always included due respect for democratic norms. Sadly, the conduct of this weekend’s local elections continued this trend.

The verdict of the OSCE/ODIHR team was clear but nuanced. While not claiming the vote was invalid, it noted numerous flaws such as “widespread and consistent allegations of intimidation, vote-buying, pressure on candidates and voters, and an unlevel playing field.” And while noting that “the legal framework is generally conducive to democratic elections and preparations for the elections were transparent and professionally managed,” it complained about “intimidation and violence against journalists” and “significant imbalance in resources, insufficient oversight of campaign finances and an undue advantage of incumbency.”

While recognizing the “orderly and transparent” conduct of the elections, the OSCE/ODIHR team also pointed to abuses such as “groups of individuals potentially influencing voters outside some polling stations.” Claims of fraud were made by Georgian Dream, UNM, and other parties. In short, another messy but not undemocratic outcome.

Matters were made messier by Mikheil Saakashvili’s joining the drama just before the vote. His return to Georgia and arrest on the eve of the election served only to heighten the polarization of Georgia’s political class. Whatever charges the government has against former president Saakashvili, his arrest is not a good look for Georgian democracy, particularly after the arrest of UNM leader Nika Melia in February. The Georgian government made the wise move to release Melia in May. This is a useful precedent.

Daniel Fried, Distinguished Fellow, Atlantic Council: It could have been worse. Georgia’s local elections were marred by various irregularities and an uneven playing field, according to the preliminary (and usually accurate) assessment of the OSCE’s election observer mission. But these were contested elections and in that sense real elections, not the mockery of elections that Russia experienced in September.

The ruling Georgian Dream Party did well, with early indications of 46-49 percent of the vote, more than the 43 percent threshold that would have triggered early parliamentary elections under an agreement brokered by the EU (and supported by the US) earlier this year. The opposition United National Movement, former president Mikheil Saakashvili’s party, did well enough to force run-off elections in Tbilisi, Batumi, Rustavi, and some other Georgian cities.

Still, it’s hard to be much cheered. Georgian politics remains both polarized and personalized. The elections were overshadowed by Saakashvili’s sudden return to Georgia and his prompt arrest. Arresting former presidents is generally not a good thing for democracy. To defend itself, the Georgian government may point to the conviction and prison sentence handed out in France to former President Sarkozy. But the result may be to further inflame Georgian politics.

The government could now take its win and try to lower the temperature. It could seek to regain ground lost earlier this year due to a series of confrontational steps including the seeming defense of beatings of LGBTQ activists and spats with the EU that have damaged Georgia’s standing with its friends in Europe and the US. Maybe the Georgian government could try delivering for Georgian society, as Saakashvili did in his better days as president, and not focus on confrontation and harassment of the opposition, a baleful trend that has marked too much of Georgian politics in recent years.

Miriam Kosmehl, Senior Expert Eastern Europe, Bertelsmann Stiftung, Germany: The exiled former president’s return causes even more tension in an already worrying political stand-off that has long plagued Georgia. Any hopes of calming the political situation seem to have been dashed for the time being.

The EU-brokered deal holding out the prospect of early parliamentary elections if the Georgian Dream share of the vote in the local poll fell below 43% helped ensure that Saturday’s vote was particularly highly charged. Saakashvili, who had toyed with the idea of returning to Georgia for many years, irresponsibly jumped at the opportunity and seems to have prevented the country from entering calmer waters following Georgian Dream’s election victory.

Saakashvili’s staged return and arrest will likely fuel the protest mood, especially as he has declared a hunger strike. With more tension and new protests set to dominate the political agenda in the country, there is a danger of further destabilization. This does not bode well for the weeks to come when there will be a number of second round run-off votes in key cities including the Georgian capital, Tbilisi, which is home to around one-third of the population.

I fear that Georgia will remain divided, with Saakashvili playing an active role in contributing to this split. The power struggle with billionaire businessman Bidzina Ivanishvili, the man behind the ruling party, will take center stage. Meanwhile, the most serious issues facing the country will remain tragically unattended, such as the Covid crisis, unemployment, and poverty. With political drama set to dominate, these topics will be pushed into the background.

We can also expect international ramifications. Saakashvili’s Ukrainian citizenship and his ties to figures within the Ukrainian establishment mean that his imprisonment will inevitably place a strain on the strategic partnership between Georgia and Ukraine, whether this is intentional or not.

Terrell Jermaine Starr, Nonresident Senior Fellow, Atlantic Council: The opposition performed fairly well in Saturday’s local elections, given the well-documented and reported violations allegedly perpetrated by Georgian Dream. Their game plan of focusing on winning the biggest, self-governing cities in the country has worked so far. Around ten key mayoral races including Tbilisi will go into a second round. That is the biggest success for the opposition. Where they must improve is in their efforts to unite around local issues that voters care about. They must also figure out a way to work around alleged violations (including the use of state resources and intimidation of voters) to win future elections, namely parliamentary elections.

While the second round city elections are between UNM and Georgian Dream, the parties who placed lower have power, too. They can rally support behind either remaining candidate. What that process will look like is still in motion, so there is much work to do before the run-off votes take place on October 30.

The wild card in this whole thing is the arrival of Mikheil Saakashvili, who had promised for years to return to Georgia but never did. Given how polarizing the ex-president is, it remains too early to determine whether his presence in a Georgian prison is more beneficial for the opposition or Georgian Dream. Speaking in Tbilisi, one Georgian Dream official assured me that if this becomes a battle between Georgian Dream founder Bidzina Ivanishvili and Mikheil Saakashvili, the ruling party expects to win every time. Meanwhile, a UNM party member told me she is confident Saakashvili’s presence in Georgia will galvanize support for the opposition.

We’ll see. Georgian Dream won overall, so they should be happy. At the same time, current polls show support for Georgian Dream at around 30 percent, a very horrible number for a party that has been in charge since 2012. If I were advising them, I’d warn the leadership not to rest on their laurels or feel too confident. During my recent time in the country, most Georgians I spoke with had little faith in Georgian Dream because of their handling of the pandemic and the poor economy. They may have won last weekend’s vote, but the real question is whether the coming second round elections will hand the ruling party a defeat that could start to unravel their hold on power.

support our work
Elections The Caucasus