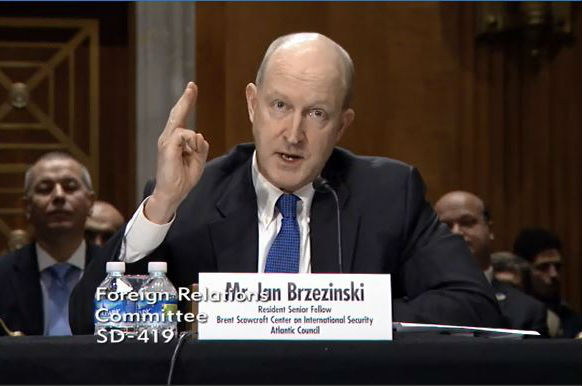 The transatlantic community has a significant stake in assuring Ukraine’s trajectory as a modern, democratic, and prosperous European state. A strategy to assist Ukraine in accomplishing that objective must impose greater economic and geopolitical costs on Russia for its aggression, enhance Ukraine’s capacity for self-defense, assist Kyiv’s efforts to reform its political and economic institutions, and integrate the nation into the Euro-Atlantic community. Here’s what that strategy should look like:

1) Increased economic sanctions against Russia: Current economic sanctions imposed on Russia have proven insufficient. For two years, Moscow has refused to withdraw from Crimea and eastern Ukraine. Today’s sanctions may be hurting the Russian economy in the context of low oil prices, but if their intended outcome has been to deter Russian aggression, they have failed by that measure.

The West should target Russia’s vulnerable refinery industry. While Russia is a top producer of oil, its refining capacities are antiquated, have little spare capacity, and are dependent upon Western, particularly US, spare parts. Former Under Secretary of State for Global Affairs Paula Dobriansky proposed that the West impose an embargo of exports to Russia of such equipment, including pumps, compressors, and catalytic agents. Such an embargo would significantly impair a key sector of the Russian economy from which Moscow derives revenues to sustain its military operations, including those conducted against Ukraine.

2) A more robust NATO posture in Central and Eastern Europe: NATO’s response to Russia’s assertive military actions across Central and Eastern Europe remains underwhelming. When Moscow invaded Crimea, it deployed 20-30,000 troops and mobilized over 100,000 on its western frontier. Since then Russia has conducted “snap” exercises in Europe involving 50,000 troops. Western counter-deployments to Central Europe have involved primarily rotational deployments of company level units. Their limited character has been unnerving to our Central European allies and have yielded no constructive change in the operational conduct of Russian forces.

NATO should increase its military presence on its eastern frontiers, including through the establishment of bases in Poland and the Baltic states that feature permanently positioned brigade and battalion level capacities.

3) Expanded Military Assistance to Ukraine: Since Russia’s 2014 invasion of Crimea and eastern Ukraine, the Ukrainian military has evolved into a more effective fighting force.

Training and equipment provided by the United States and other nations have been helpful and should be expanded. At the institutional and strategic levels, emphasis should be directed to assisting the Ukrainian defense establishment to improve its personnel structures, logistics systems, medical capacities, intelligence organizations, and command and control systems.

The time is long overdue for the United States and others to grant Ukraine the “lethal defensive equipment” it has requested. Russia’s large-scale “snap” exercises underscore the challenges the Ukrainian military would face should Putin decide to drive deeper into Ukraine, a possibility that cannot be discounted in light of Moscow’s rhetoric and belligerent military posture.

The provision to Kyiv of anti-tank, anti-aircraft, and other weapons would complicate Russian military planning by adding risk and costs to operations against Ukraine. Moreover, the failure of Washington to provide such equipment is not only disillusioning to Ukrainians, it signals a lack of determination by the United States to counter this Russian aggression—particularly when such equipment is shared with US state and non-state partners elsewhere in the world.

4) Reinforced Public Diplomacy/Information Warfare: Countering Russia’s significant information campaign aimed to foster dissension, fractionalization, and turmoil must be a key priority. Russia’s propaganda and disinformation war against Ukraine (and other nations in Europe) is being waged at levels not seen since the Cold War.

Left unaddressed, the campaign threatens political unity in Ukraine, including that necessary to undertake essential and painful economic reforms. There is an urgent need to expand dissemination of accurate, credible information and news in local languages via all forms of media throughout the country.

Information and public diplomacy operations are also a matter of presence. The international community should increase its physical presence throughout Ukraine, particularly in those regions where Russia’s subversive operations are most active and concentrated. Toward this end, the United States should establish consulates in key cities, including Odesa and Kharkiv.

Ukraine has made real progress in reducing its dependency upon Russian energy supplies, particularly gas. Last year, Kyiv began to import natural gas through Poland, Hungary, and Slovakia through pipelines that had been reconfigured for “reverse flow.” These imports underscore the powerful potential of linking Ukraine to an emerging Central European North-South Corridor of gas and oil pipelines that will traverse the energy markets that lie between the Baltic, Black and Aegean seas.

A second important dimension of Ukraine’s economy is its defense industry. As recently as 2012, Ukraine was the fourth largest arms exporter in the world with total deals valuing $1.3 billion. Originally built to supply and sustain the Soviet military, Ukraine’s defense industry remained after independence heavily focused on the Russian market. Even with the loss of the Russian market and manufacturing facilities seized in eastern Ukraine and Crimea, the industry continues to be a significant element of the Ukrainian economy. With its sophisticated rocket works, heavy equipment, aviation design, and production centers, Ukraine’s defense industry ranks in the top ten of global arms exporters.

A central objective of Western assistance should be to help Kyiv design, promulgate, and execute a comprehensive national strategy to restructure its defense industry so that it becomes more oriented toward the West and better aligned with Western business practices and market structures.

6) Supporting Ukraine’s Euro-Atlantic Integration: Assistance to Ukraine and its reform efforts must reflect an embrace of Ukraine’s transatlantic aspirations. Those who sacrificed themselves on the Maidan were motivated by their nation’s aspiration to become a fully integrated member of Europe and its key institutions. Indeed, it is this aspiration that Moscow is trying to crush.

That vision serves as a powerful driver of Ukraine’s reform efforts. Both NATO and the EU should use their respective summit meetings to underscore their support for the eventual integration of Ukraine in to their respective communities. The Alliance, for example, should use its Warsaw Summit meeting in July to reiterate its vision that Ukraine and Georgia “will become members of NATO.”

The Maidan was a powerful demonstration of the Ukrainian peoples’ commitment to democracy and its sovereignty as a European state. That commitment has been challenged by Russian aggression. From this conflict, Ukraine has emerged more unified and more determined to become a full member of the Western community of democracies. It deserves our full support.

Ian Brzezinski is a Senior Fellow at the Atlantic Council’s Brent Scowcroft Center on International Security. This is an abridged version of testimony he delivered to the Senate Foreign Relations Committee at a March 15 hearing on “Ukrainian Reforms Two Years after the Maidan Revolution and the Russian Invasion.”

Image: Ian Brzezinski, a Senior Fellow at the Atlantic Council’s Brent Scowcroft Center on International Security, testified before the Senate Foreign Relations Committee at a March 15 hearing on “Ukrainian Reforms Two Years after the Maidan Revolution and the Russian Invasion.”