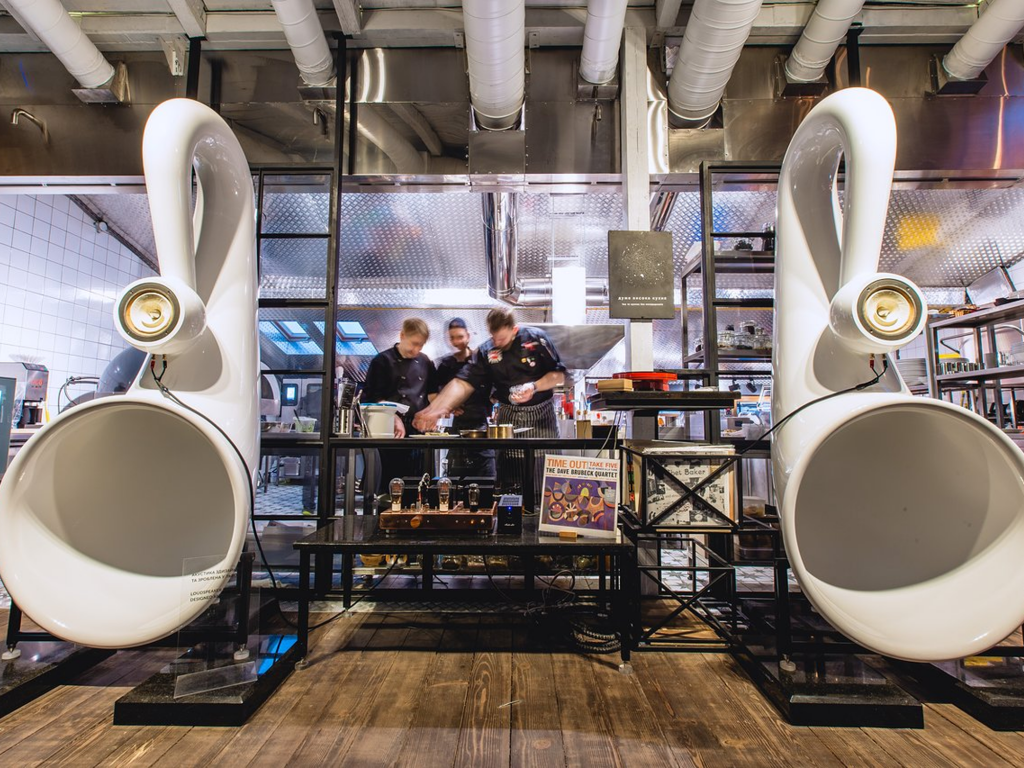 This summer I was lucky enough to visit Ukraine twice—yeah, baby!—and a big part of the joy of traveling there comes from eating. Nothing is off limits. In the remote town of Ivano-Frankivsk, a stopping point for skiers going to the Carpathians in western Ukraine, at Fabbrica I encountered a delicious non-alcoholic drink made with sea thistle and purple fettuccine noodles made from beets. The prices are a fraction of what one would pay in the United States. And the service actually enjoys the art of hospitality.

It takes no imagination to say that the next hot food destination is Ukraine. But where should foodies start in this enormous country, the fabled breadbasket of Europe?

For my money, begin with Lviv, the former Austro-Hungarian city in western Ukraine which boasts superb coffee shops on almost every block. The food in Lviv ranges from ordinary and middling to mind blowing. In May, I visited Pretty High Kitchen (14 Rinok Square, Lviv), a new tasting restaurant. As I ascended the old staircase, trudging up to the fourth floor, I wondered if we had made the right choice. And then I heard jazz tunes blasting through two ten-foot-tall white saxophone-like horn loudspeakers as my eyes took in the unusual décor. An old bed with white string to suspend it was hanging upside down from the attic ceiling, white bird houses and cages lined the red brick walls alit with white lights, and an open kitchen invited guests to participate in the meal. Old fashioned, non-matching comfortable chairs made me feel immediately at home.

My dining companions that evening included Danylo Lubkivsky, the former deputy minister of foreign affairs, who is a meat and potato kind of guy. When he asked for the menu and I explained that there is none, his eyes got wide.

The waiter asked each guest to describe what ingredients they prefer tonight. The chef will make each dish according to the desires of the diner. For the starter, I asked the waiter for radishes and arugula and left the rest to the chef. The waiter returned with an extraordinary salad that had some heat from chipotle peppers—the first time I’ve ever encountered them in 15 years of eating in Ukraine. For the main dish, I requested steak, curry, and roasted red peppers, and I was not disappointed. The chef used filet mignon and the whole shebang melted in my mouth.

Danylo, previously prepared to bolt when he learned there was no menu, couldn’t stop talking about the place.

But there’s even more culinary fun to be had at 14 Rinok Square.

The FEST Restaurant holding also owns two other spectacular restaurants in the same building. On the third floor, my friend pounded on an old padded Soviet door. A man in a bathrobe and slippers answers. Inside is Soviet kitsch galore. Old newspapers dot the walls, an old black and white television provided background noise, and a bunny sat in a cage. The irate old man wanted to know why we were disturbing him. In order to enter the restaurant, The Most Expensive Restaurant in Galacia, a lovely wood-paneled restaurant that would not be out of place in Georgetown, you must convince the old man to let you enter the restaurant through his closet. The elaborate ruse makes the experience.

Also in the same building, Kryivka, a bunker for the Ukrainian Insurgent Army during World War 2, offers a trip down nostalgia lane. You don’t go to Kryivka for fine dining. It’s a red brick bunker with wood hewn tables. If you are foolish enough to order Russian pelmeni, the lights go out and a Ukrainian Insurgent Army soldier appears at your table and physically removes you. Over the loudspeaker, the restaurant staff pretend to shoot the offending diner while he has a shot of vodka in the back. The lights then go up and the waiter comes out with a dishrag to clean up the remains of the meal.

Next door is another gem, Lvivski plyacky, a small café that serves perfectly flaky cherry, poppyseed, and apple strudel with chocolate, vanilla, or caramel sauce. The strudel won’t even set you back $2, and you won’t be able to stop at one. For Americans like me who were raised on chemically enhanced canned cherries, the cherry strudel made with deep red cherries from Ukraine is a must.

It’s only a matter of time before international foodies discover Ukraine, but until they do, please pass me another strudel.