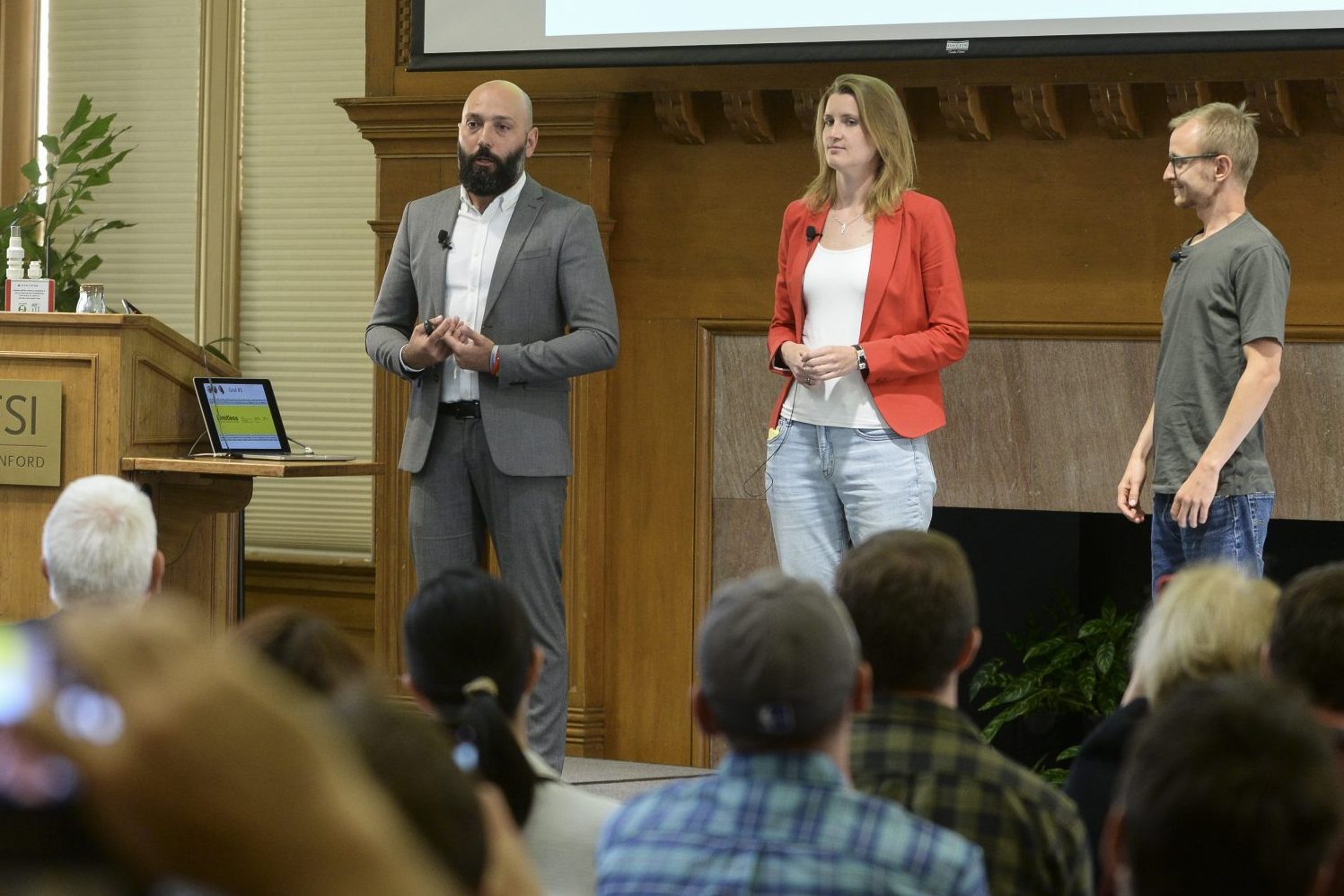 Artem Romaniukov doesn’t look like an anti-corruption activist. With his bald head, full beard, and tall and trim figure, he still looks the part of a slick Ukrainian businessman. But Romaniukov quit business six years ago in order to dedicate himself to turning his native Ukraine around.

He is one of three Ukrainians who won a full scholarship in 2019-2020 to study at Stanford University with renowned political scientist Dr. Francis Fukuyama. Now in its third year, the Ukrainian Emerging Leaders Program has become one of the most competitive fellowships for up-and-coming and ambitious Ukrainians.

Romaniukov hails from Ukraine’s industrial center, Dnipro. During the Maidan Revolution, he ran an engineering business, but decided to focus on public procurement to clean things up. Romaniukov learned about an online public procurement system called ProZorro, which puts government accounting and tender systems online, increasing transparency and decreasing the likelihood of fraud.

It might seem like an obscure topic, but something as simple as public procurement is one of the keys to bringing much-needed foreign investment to Ukraine. Companies cannot be expected to work with the government if bureaucrats are able to steer bids to whoever they want in an opaque process.

“The most obvious thing here to change is to make this ‘black box’ transparent,” says Romaniukov. Creating a fair and open process for companies to bid on projects, to create a genuine and transparent market that can be observed and reported on, is a game-changer.

In 2015, Dnipro started to use the ProZorro system before the country as a whole embraced it. Romaniukov started with a small district before expanding to the city. Today, hundreds of millions of Ukrainian hryvnia flow through the system.

At Stanford, his studies have been brought into a sharper focus since the onset of the coronavirus pandemic, with the chance to see up close how the United States operates in a crisis. Romaniukov is keeping a close eye now on how the US presidential election unfolds, and what effect the pandemic has on voter turnout and results.

But he’s still keeping tabs on politics at home. Ukrainian President Volodymyr Zelenskyy’s choice to fire much of his government in early March came as another surprise, particularly the decision to replace highly regarded Prosecutor General Ruslan Ryaboshapka with loyalist Iryna Venediktova.

“When you’re firing the prosecutor general just because he doesn’t sign five [investigations] for top officials of [the] previous era, this is not a good thing to start with,” Romaniukov says, alluding to reports that Ryaboshapka was fired for not pursuing a political investigation of former Ukrainian president Petro Poroshenko.

Even so, Romaniukov is hopeful about Ukraine’s future. For all the political hurdles that the country has faced, he says the Ukrainian people have been increasingly vocal in fighting for progress in every sector, and he doesn’t see that ending anytime soon. Once he returns from Stanford, he will certainly be among them.

Bondar coordinates social reform for the Ministry of Finance of Ukraine, and she’s working to develop an innovation ecosystem while at Stanford. Ukrainian businesses have a lot to offer the world and will find success once they firmly integrate with the global system.

She sees a model in California. Plenty of Danish startups have brought their businesses to Silicon Valley and seen incredible growth. With that growth, they have established a fund that shares this growth with businesses back home and supports the education of Danish students. Nobody wants to see startups leave their country, but the access provided by Silicon Valley is unmatched. This is a model that could be replicated with Ukraine’s unique culture of innovation and startups.

Bondar is chiefly working on pension reform through the Ministry of Finance. With a variety of problems to tackle, she has prioritized bringing transparency and equity to the field. One major initiative has been on clarifying how much a pension pays out, helping people to understand how much money they can expect, and making their planning for the future easier. She’s also leading the way on reducing the Ukrainian pension fund’s deficit, a major accomplishment that can help shore-up Ukraine’s dealings with the International Monetary Fund. This is especially important now as the coronavirus crisis rages on, dampening Ukraine’s economic outlook.

Bondar is impressed with Ukraine’s relatively new government. Zelenskyy’s administration is younger, more technocratic, and eager for change. One initiative she’s seen pushed is to encourage more open communication and innovation without fear.

Three more reasons to be optimistic about Ukraine

In the six years since the Revolution of Dignity, Ukraine has not answered its most important questions: how will the country ensure democratic values and finally deliver justice?

Pavel Vrzheshch is the co-founder and creative director of Banda Agency, a creative agency working to help brands communicate with people. The agency’s most notable effort was the “Ukraine Now” campaign, a global marketing campaign aimed at creating an international brand for the country that would attract investment and tourism. It was a big success and is still used today.

For a man so deeply inspired by his imagination, Vrzheshch began his adult life studying programming and technology but was blown away by the creative options offered by a program like Photoshop. To him, every spectrum of life can be improved with the power of creativity, and it’s a sense he brings to all of his work.

Ukraine has a history of its best and brightest leaving the country to find work abroad, but Vrzheshch can’t bring himself to follow suit. “My brain always wants to improve Ukraine,” he says. When he sees something good in another country, he always asks, “how can we do something similar in Ukraine or how can we do something better in Ukraine?” The country’s best asset is the people it inspires, and Pavel wants to make Ukraine becomes a place that young people will flock to for opportunity.

When the 2019 Ukrainian presidential election started, Volodymyr Zelenskyy’s upstart campaign attracted plenty of young innovators. But once the election ended, few of these people had the desire to transition into government bureaucracy and public relations.

Vrzheshch was paying attention to this vacuum and believes that though “there is strong and good political communication,” governmental communication often gets overlooked. So, his project at Stanford focuses on ways to modernize and innovate government communications to galvanize public support for reforms. He ultimately hopes that “the government can be more open and honest,” and will be able to “show the power of vulnerability.”

As his time at Stanford comes to a close, Vrzheshch plans to tackle one of Ukraine’s bigger problems, the issue of perception. He says in order to attract companies from around the world, Ukraine needs to be perceived as a stable and secure country for foreign direct investment. Vrzheshch, just like Bondar and Romaniukov, is hopeful about the future of Ukraine. The country is at a crossroads and needs new ideas to solve old problems. After a year at Stanford, these three may be some of the best candidates to do just that.

With Ukraine under coronavirus lockdown, legislation has been rushed through allowing local authorities to operate online. The move is being greeted as another step in the right direction for Ukraine’s fledgling democracy.