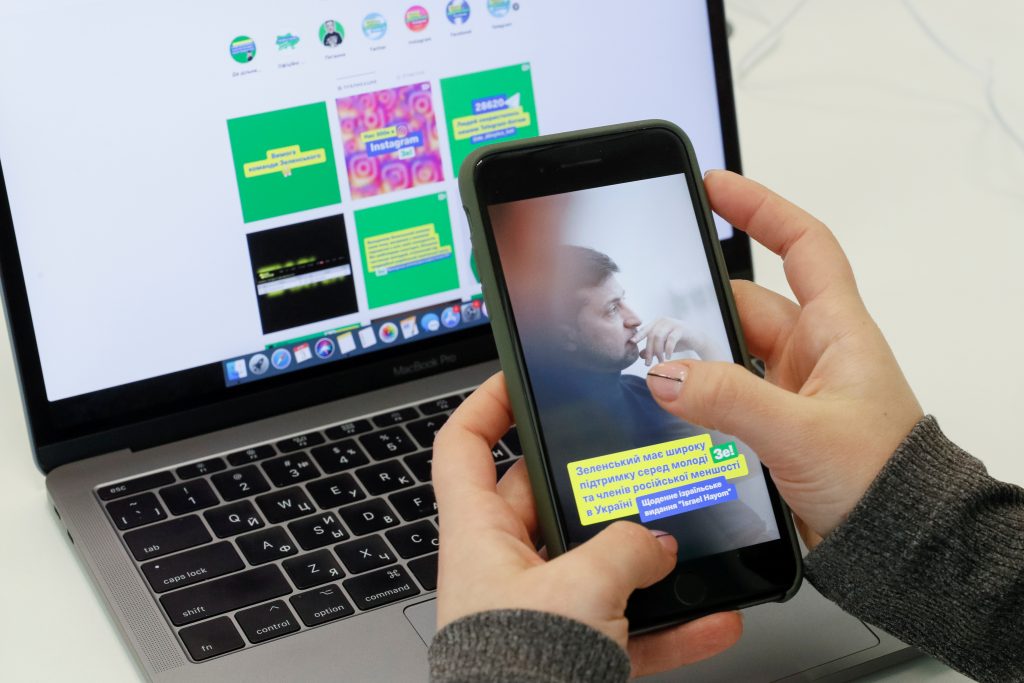 Ukrainian President Volodymyr Zelenskyy released a 50-minute video on April 22 marking the anniversary of his sensational 2019 election victory. The lengthy video aimed to highlight the achievements of Zelenskyy’s first year in power, but this upbeat take could not hide the sense of disillusionment felt by many of his former voters. Carried to power on a wave of unprecedented optimism, Zelenskyy reaches the one-year mark with his approval rating plunging and hopes of a new beginning fading fast.

Volodymyr Zelenskyy was an absolute political beginner when he won the Ukrainian presidency in April 2019 with a landslide victory over incumbent Petro Poroshenko. His victory was interpreted by most Ukrainians as the chance of a fresh start for the war-weary and poverty-stricken country. The majority of Zelenskyy’s supporters saw his election bid as protest vote against Ukraine’s deeply discredited political old guard and hoped he would “drain the Ukrainian political swamp”.

Prior to his political debut, Zelenskyy was best known as a comedian and showbiz celebrity. Famously, he won the presidency following a highly successful stint as virtual president in a TV series that allowed him to pose as the antidote to Ukraine’s many political ills. Zelenskyy’s presidential campaign was filled with similarly vague populist rhetoric. Campaign billboards appeared across the country promising to prosecute the many corrupt officials whose apparent impunity infuriated ordinary Ukrainians. He promised to end the undeclared war with Russia, attract international investors, and entice Ukrainian labor migrants home.

After getting off to a slow start due to protracted political foot-dragging over his inauguration, Zelenskyy received a huge boost when his Servant of the People party won an overall majority in Ukraine’s July 2019 parliamentary election. This placed the new president in the unprecedented position of controlling both the executive and legislative branches. The way seemed clear for a period of historic change. However, the radical reforms that many expected have largely failed to materialize.

Zelenskyy began by filling key positions with political newbies like himself. His first government was the youngest in Ukrainian history, while more than three-quarters of the new parliament were first time MPs. The biggest accomplishment under Zelenskyy’s leadership so far has been the passing of a land market reform bill on March 30. This law ended a two-decade moratorium of farmland sales. The bill, however, featured ample last-minute amendments and was quite far from the format initially advocated by the International Monetary Fund and Ukrainian reformers.

In common with all Ukrainian reforms, this new farmland law is noticeably overshadowed by a weak judicial system. Without independent judges, no reforms in Ukraine are set in stone, with lawmakers often exploiting loopholes or finding other ways to bypass or reverse them. During his first year in office, President Zelenskyy has failed to address the urgent need for judicial reform. It took Zelenskyy’s team four months to appoint Prosecutor General Ruslan Riaboshapka, who then served for just six months before himself being replaced. Riaboshapka’s successor Irina Venediktova’s associations with disgraced former Ukrainian president Viktor Yanukovych have done little to ease concerns over her appointment.

There have been some headline-grabbing reforms under Zelenskyy’s leadership, but even these may not live up to close scrutiny. The president’s team followed through on campaign promises to end the immunity from prosecution enjoyed by members of parliament, but many question the effectiveness of the adopted changes. Parliament also passed a number of reform-oriented laws such as an illicit enrichment bill that was touted as a landmark victory in the fight against corruption.

This limited progress is a modest return from the first parliament in Ukrainian history to enjoy a one-party ruling majority. Indeed, critics have accused the president and his allies of valuing speed over substance in their haste to capitalize on their dominance of the political scene. This has led to flurries of legislative activity dubbed “turbo regime” lawmaking by the presidential team.

This turbo regime has been notably absent in the slow progress of a banking sector reform bill that directly targets the interests of Zelenskyy’s former business partner and leading Ukrainian oligarch Ihor Kolomoiskiy. For many years, Zelenskyy was one of the star names on Kolomsoiskiy’s 1+1 TV channel, leading to suggestions that the oligarch also stood behind the showman’s bid for the presidency. Many feared Kolomoiskiy would use his influence over Zelenskyy to secure the return of leading Ukrainian bank Privatbank, which was nationalized in late 2016 amid scandalous revelations of financial irregularities and at huge cost to the Ukrainian state. To stop this from happening, the IMF tied a new financial package to adoption of a law preventing the return of nationalized banks to their previous owners.

With the escalating coronavirus crisis making IMF financial assistance vital, this banking law finally passed its first reading in late March with backing from the president. However, it has yet to be put to a second and final vote, and has been targeted with thousands of amendments tabled by Kolomoiskiy loyalists from within Zelenskyy’s own party. Some see the president’s support for the banking law as representing a definitive split with Kolomoiskiy. However, the final version of the bill is yet to be seen and many would have preferred to see the president distance himself far earlier.

The most dramatic moment of the Zelenskyy presidency so far was undoubtedly the March 4 decision to dismiss his first government. The timing of the reshuffle could hardly have been worse, occurring less than two weeks before Ukraine imposed nationwide coronavirus quarantine measures. A number of key ministerial positions initially remained vacant and Zelenskyy reportedly struggled to convince qualified candidates to serve in his government. More changes followed before the end of the month, with the new ministers of finance and health departing just 26 days after their appointment.

These personnel problems have extended to the presidential administration itself. Zelenskyy initially demonstrated poor judgment by appointing oligarch Kolomoiskiy’s former lawyer Andriy Bohdan as his first chief of staff. Bohdan was then replaced in February by close Zelenskyy confidant Andriy Yermak, who is known for his business ties to Russia. Since Yermak’s appointment, Ukraine has adopted a number of positions favorable to Russia, including attempts to begin direct dialogue with Moscow’s proxies in eastern Ukraine and the prosecution of prominent Maidan Revolution participant Tetiana Chornovol.

Meanwhile, the reformers whose credibility helped facilitate Zelenskyy’s passage to the presidency are no longer in favor. Former Ukrainian Finance Minister Oleksandr Danylyuk was tipped for a top job but ended up becoming secretary of the National Security and Defense Council for a brief period before resigning. Celebrity investigative journalist-turned-MP Serhiy Leshchenko, who helped run Zelenskyy’s presidential campaign, was frozen out of the new president’s inner circle before being appointed to the board of directors at state-owned railway operator Ukrzaliznytsia.

Zelenskyy has already served one-fifth of his presidential term. He may yet surprise his detractors, but he begins his second year in office with the optimism of spring 2019 now in markedly short supply. Instead, Ukraine’s novice leader has a controversial and inexperienced new government in place that is struggling to come to grips with the repercussions of a major global economic crisis. His parliamentary majority is divided from within, and the issue of undue oligarch influence remains as problematic as ever. It is far too early to deliver a final verdict on the Zelenskyy presidency, but at this stage the setbacks clearly outweigh the accomplishments.

Ilya Timtchenko is a freelance writer and former business editor at the Kyiv Post.

Image: Volodymyr Zelenskyy won the Ukrainian presidency in 2019 with a groundbreaking virtual campaign built around social media and his TV role as a fictional president. One year on, the former showman is struggling to live up to the political promise of his election success. REUTERS/Valentyn Ogirenko