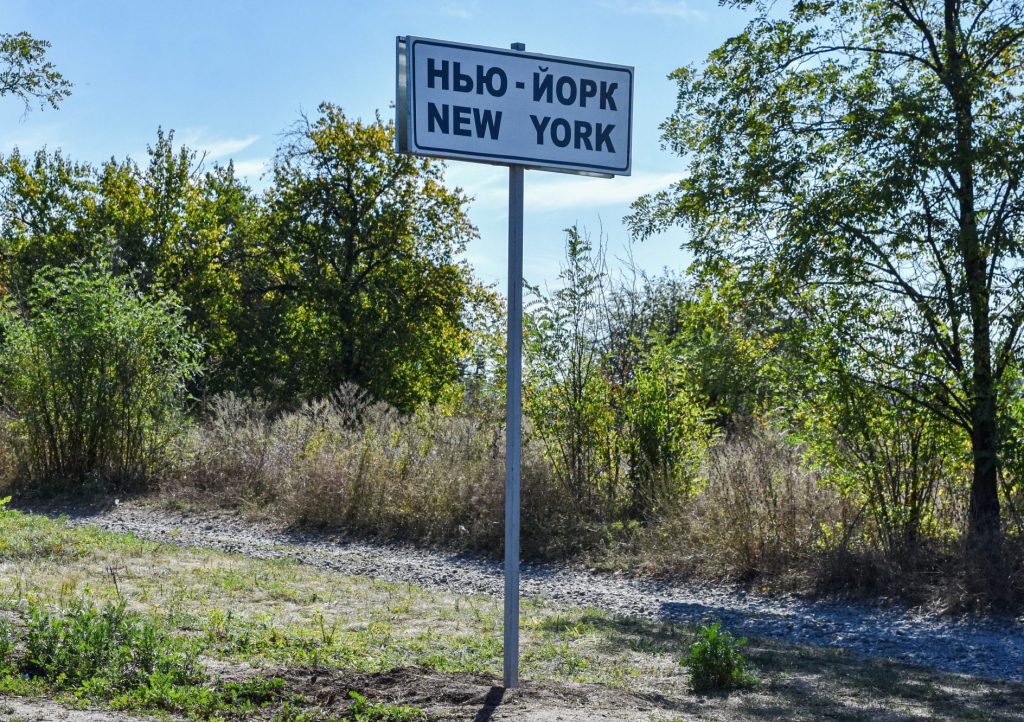 During the 2021 summer season, a small and seemingly inconsequential town in eastern Ukraine attracted a sudden flurry of international headlines. Unusually for the war-torn region, the stories in question were not about Russia’s latest military escalation or the sufferings of civilians caught up in the conflict. Instead, reports focused on the town’s decision to change its name to New York. While many were initially surprised by this seemingly eccentric move, it was actually entirely in keeping with the region’s cosmopolitan past.

Located in Donetsk Oblast a mere stone’s throw away from the front lines, Ukraine’s very own New York was originally founded in the late nineteenth century by German settlers. According to local legend, the town’s name was chosen because the wife of one of the founders had American roots. It remained New York until 1951, when mounting Cold War rivalry with the United States convinced the Soviet authorities to rename the town Novhorodske.

Following the onset of Russian aggression in 2014, calls to revive the town’s original name began to grow as locals sought to counter Kremlin propaganda falsely depicting the entire region as historically Russian. “If we change the name, we can show the whole world that our city has no basis in Russia. Our history is not Russian history; it is our history, European history,” local youth leader Kristina Shevchenko told Euronews in April 2021.

Now officially renamed New York, the Donetsk region town of around 12,000 is making the most of its attention-grabbing identity. In the past few months, it has hosted a literary festival and an alternative New York Marathon to raise awareness of ongoing Russian aggression, while also inspiring a recently released book by Franco-Swiss journalistic duo Sebastien Gobert and Niels Ackermann. Rumors that the town will soon seek to brand itself as “The Little Apple” remain unconfirmed.

This engaging tale of an east Ukrainian town founded by Germans and named after New York is a timely reminder of the region’s largely forgotten international inheritance. From the dawn of the industrial age until the first decades of the twentieth century, eastern Ukraine served as Europe’s very own Wild East and attracted a wide range of industrialists, entrepreneurs and adventurers from across the continent who established flourishing communities and founded entire cities.

Sadly, this fascinating history was subsequently washed away by the totalitarian tides of the twentieth century. In its place, Moscow has cultivated the myth of eastern Ukraine as an indivisible element of Russia’s ancestral heartlands.

Russian President Vladimir Putin is a key proponent of this historically illiterate nonsense, and has frequently used such claims to question the legitimacy of modern Ukraine’s internationally recognized borders. Likewise, false notions of eastern Ukraine’s Russian roots have played a key part in Moscow’s attempts since 2014 to justify its ongoing military intervention in the region.

The true tale of eastern Ukraine’s formative years presents a very different picture. Tellingly, both of the regional capitals currently under Russian occupation were actually established by Brits. Welsh businessman John Hughes founded Donetsk in 1869, while Englishman Charles Gascoigne is credited with establishing Luhansk almost a hundred years earlier in the late eighteenth century. One wonders what these two enterprising British pioneers would have made of the Kremlin’s subsequent efforts to distort their remarkable legacies.

Meanwhile, the aforementioned Germans of New York were far from the only international community to prosper in eastern Ukraine during the second half of the nineteenth century. As the interests of European industrialists continued to grow, so did the region’s expat population.

The Belgian presence in particular was so large that a special 65-hour rail service from Brussels to Dnipro was introduced in 1896. On the eve of the First World War, there were a total of eight separate Belgian consulates located throughout Czarist Ukraine, with most concentrated in the booming cities of the industrial east.

This international involvement was unwelcome and embarrassing for the Bolsheviks, who sought to eradicate all traces of eastern Ukraine’s cosmopolitan heritage while claiming the laurels of industrialization for themselves. New York’s name change in the early 1950s was one of many such steps to remove all evidence of the region’s diverse beginnings.

Since the collapse of the USSR, there have been a number of isolated initiatives to rediscover and publicize this suppressed history. However, Kremlin disinformation continues to shape perceptions of eastern Ukraine, both in the international information space and inside Ukraine itself. This needs to change. The Ukrainian authorities should treat the issue as a matter of national security and an important front in the hybrid war against Russia.

Raising awareness about eastern Ukraine’s considerable historic ties to the rest of Europe will not magically persuade Putin to retreat from the region, of course. However, promoting this intriguing heritage can help change the conversation around eastern Ukraine while exposing the emptiness of Moscow’s imperial pretensions.

Contrary to Kremlin claims of the region’s quintessentially Russian identity, eastern Ukraine has a strikingly multicultural past and was once viewed by people across Europe as a land of abundant international opportunity. Now would be a very good time to revive this image.