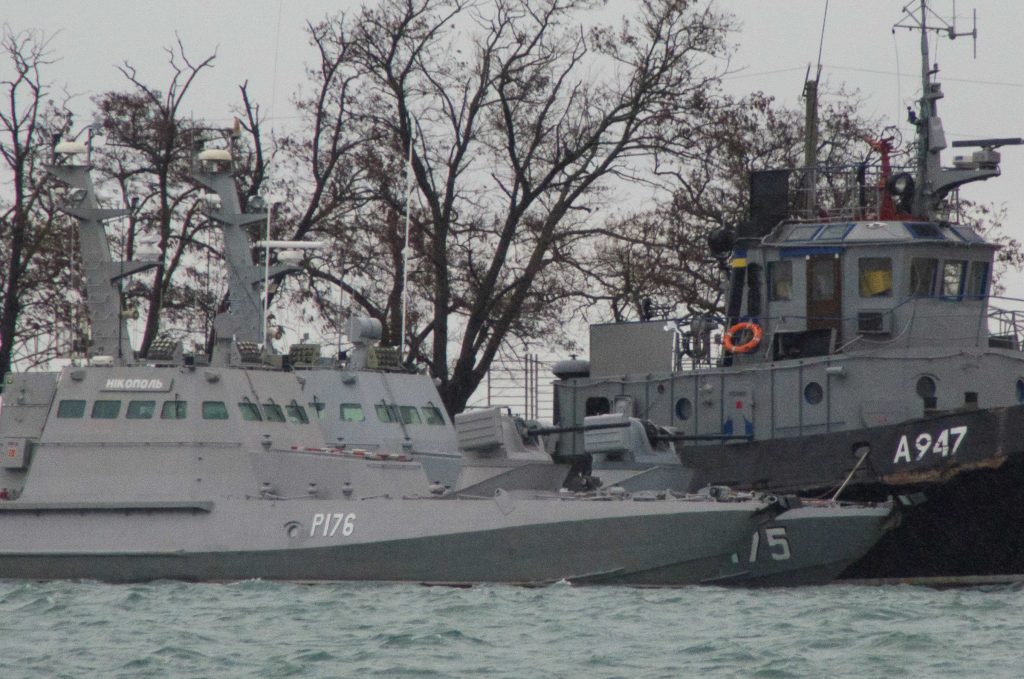 Ukrainian naval ships, which were recently seized by Russia's Coast Guard, are seen anchored in a port in Kerch, Crimea November 28, 2018. REUTERS/Alla Dmitrieva

On November 25, the Russian Coast Guard attacked and illegally seized three Ukrainian naval vessels on international waters in the Black Sea. The twenty-four Ukrainian sailors on board were arrested for having violated Russian territorial waters and jailed in the nineteenth century KGB prison Lefortovo in Moscow.

These Ukrainian sailors were on Ukrainian vessels going from one Ukrainian port to another, while passing through Ukrainian or international waters. They did nothing wrong.

It’s important to understand what Russia is doing on the Black Sea. Russia wants to turn the vast Sea of Azov from a joint Russian-Ukrainian water, as agreed to in a 2003 bilateral Russian-Ukrainian agreement, into an exclusively Russian territory. International shipping into the two important Ukrainian commercial ports of Mariupol and Berdyansk is increasingly harassed and delayed by Russian inspections.

Many supporters of Ukraine called for early and firm Western sanctions on Russia to deter the Kremlin from further aggression in the Sea of Azov and for the release of the twenty-four Ukrainian sailors, but they kept wishing.

Almost four months after Kerch, on March 15, the West managed to do something.

The single positive element is that this was a coordinated action between the United States, the European Union, and Canada. It marked a restoration of the Western alliance that President Donald Trump all too obviously has wanted to ditch. On April 6, 2018, the United States carried out severe Russia sanctions without any coordination with allies.

Coordinating sanctions this year was a major improvement, but there were big negatives.

First, the March 15 sanctions came far too late to make any significant policy impression. The Moscow stock and currency exchanges received these minor sanctions not without appreciation.

Second, no significant person or enterprise was sanctioned, as these sanctions were very limited. The US sanctions, which were the most serious, hit six individuals and eight enterprises, none of whom would be known outside of a rather limited circle of experts.

The EU list looks even less impressive. It does not contain the biggest name on the US list, Gennady Medvedev, the deputy director of the Board Guard Service of the FSB. (The Russian Coast Guard is subordinate to the FSB.) Reportedly, the Finns did not want him to be sanctioned, because they need him for their bilateral negotiations.

The Finnish position is becoming increasingly difficult to maintain. Two of Putin’s closest cronies, Gennady Timchenko and Boris Rotenberg, have escaped EU sanctions because they obtained Finnish citizenship in the 90s. Why doesn’t Finland deprive them of their dubiously earned citizenship rather than defend them internationally? Cowardice is not very impressive or effective in sanctions policy.

Meanwhile, Oleg Deripaska exposes US government weakness. After having got four of his companies delisted from US Treasury sanctions, he is now proceeding with a daring step that nobody has undertaken before him: Suing the US Treasury for having deprived him of $7.5 billion. Well, he is not likely to win over the US Treasury, but how can he sue Treasury when he is not allowed to have any financial relations with US persons?

These timid US sanctions on Russia are a consequence of the policy of the Trump administration.

First, with its severe sanctions of April 6, 2018, the United States antagonized its European allies and caused a major upset on the global aluminum market. These poorly designed sanctions could not be repeated but had to be mitigated.

Second, those sanctions deprived the European allies of confidence in the Trump administration. As a consequence, the Europeans became highly skeptical of any US proposal and preferred to minimize sanctions, though the United States realized how weak its sanctions were without EU collaboration, so it tried to get back to cooperation.

The natural consequence has been less effective and much delayed sanctions. By delivering too little too late, the West has given President Vladimir Putin a victory in Kerch and the Azov Sea.

Anders Åslund is a senior fellow at the Atlantic Council and the author of the forthcoming book “Russia’s Crony Capitalism: The Path from Market Economy to Kleptocracy.”