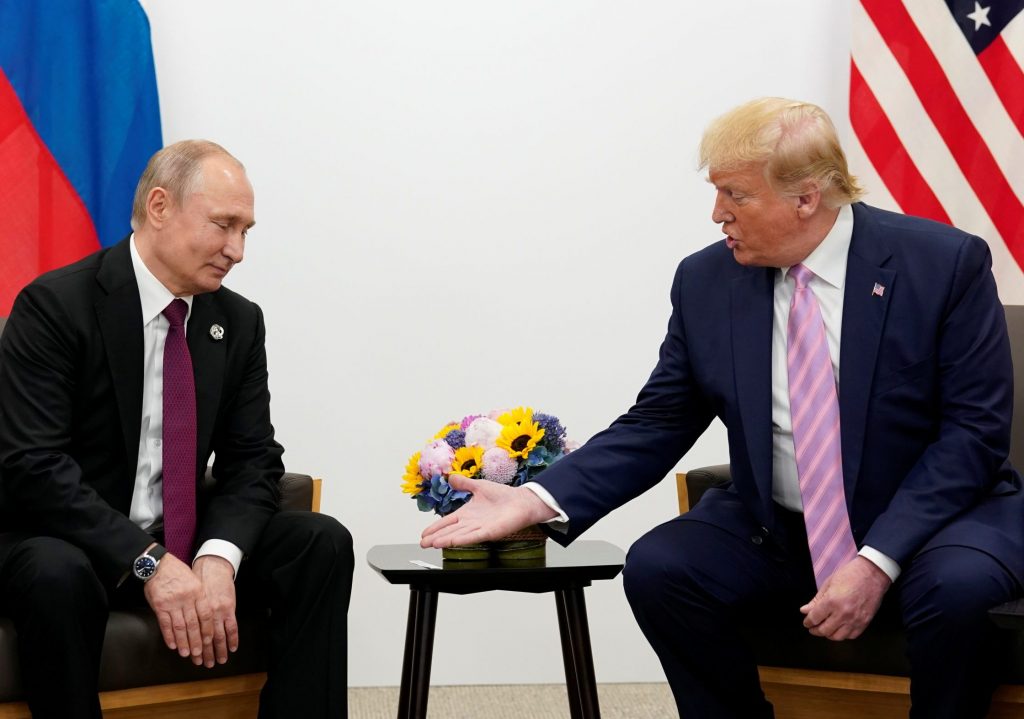 With attention focused on the escalating public disorder across the United States, many people may have missed President Trump’s announcement last weekend that he plans to invite Russia to the G7 summit in America later this year. Trump’s invitation is worth considering in some detail because it has such potentially disastrous implications for international law and global security.

The suggestion that Russia join the G7 summit in September 2020 along with India, South Korea, and Australia is the latest attempt to bring the Kremlin in from the G7 cold. Moscow’s suspension from what was then the G8 group of leading industrial nations dates back to March 2014, and came following the Russian invasion and annexation of Ukraine’s Crimean peninsula.

Since 2014, Trump has emerged as a particularly vocal advocate of Russia’s return. He first spoke in favor of renewing Moscow’s membership of the exclusive club during the August 2018 G7 summit in Canada, before reiterating these calls in summer 2019. French President Emmanuel Macron has also said it would be “appropriate” for Russia to rejoin the G7 format.

Other members of the seven-nation group do not agree. Following President Trump’s recent statement, Prime Minister of Canada Justin Trudeau and UK Prime Minister Boris Johnson both confirmed their opposition to Russia’s return. “Russia was excluded from the G7 after it invaded Crimea a number of years ago, and its continued disrespect and flaunting of international rules and norms is why it remains outside of the G7, and it will continue to remain out,” commented Trudeau. Meanwhile, a spokesperson for the British leader confirmed that Johnson would oppose Russia’s inclusion in the G7 format unless the Kremlin ceases its “aggressive and destabilizing activity.”

The country with the most reason to be alarmed by talk of welcoming Russia back into the G7 fold is Ukraine. Since Russia’s initial G7 suspension in March 2014, Kremlin aggression against Ukraine has only increased. The Kremlin continues to occupy Crimea, significantly tightening its grip on the peninsula over the past six years. Moscow has forced tens of thousands of Ukrainian citizens to flee to mainland Ukraine, while encouraging large numbers of Russians to settle in Crimea in order to decisively alter the demographic balance and undermine any future efforts to resolve the annexation crisis via referendum.

Meanwhile, Moscow is still waging an undeclared and supposedly clandestine war in eastern Ukraine that in reality has long since become one of the world’s worst-kept secrets. Beginning in spring 2014, Russia has maintained a hybrid military presence in eastern Ukraine comprised of Russian weapons and officers commanding a mixed force of conventional Russian troops, non-state mercenary forces, and local collaborators operating under the guise of “separatist republics”.

This fig leaf has failed to fool the international community. Instead, the US, Canada, the European Union, and a number of other countries have introduced a series of sanctions measures against Russia over its ongoing military intervention in Ukraine.

Critics claim these existing measures fail to reflect the gravity of Moscow’s actions. However, advocates of a tougher stance on Russian aggression face opposition from those who dismiss sanctions as ineffective and argue in favor of greater dialogue with the Kremlin. Trump and Macron are the two most prominent supporters of a thaw in ties with Moscow, but they are joined by many others within the ranks of the Western world.

Efforts to end Russia’s international isolation have gained pace over the past year, with Russia readmitted to the Parliamentary Assembly of the Council of Europe (PACE) in summer 2019 despite Moscow’s refusal to address the concerns over Russian aggression in Ukraine that first led to its 2014 suspension.

In this context, the return of Russia to G7 would be particularly ominous. Russia’s removal from the G8 format in March 2014 was a largely symbolic move that imposed no immediate costs on the Kremlin. What it did do was send a message that an aggressive Russia was no longer welcome at the top table of international affairs and could expect further isolation.

So far, Moscow has chosen to ignore this message.

In the years following Russia’s suspension, the Kremlin has shown no interest in ending its aggression against Ukraine. On the contrary, Russian hybrid forces still control large swathes of eastern Ukraine, while sporadic fighting continues in a conflict that has already claimed more than 14,000 lives. Over the past year alone, Moscow has signaled its intention to remain in eastern Ukraine for the long-term by issuing hundreds of thousands of Russian passports to local residents, effectively transforming the occupied regions into passport protectorates.

Furthermore, failure to stop Russia in Ukraine has led to an escalating campaign of hybrid hostilities waged by the Kremlin against the entire Western world. Since 2014, Moscow has engaged in everything from cyber-attacks, political assassinations, and attempted coups, to support for radical political parties, separatist movements, and unprecedented disinformation campaigns in the EU, the United States and beyond. This innovative form of international aggression allows Moscow to target the leading nations and institutional foundations of the post-1991 world order while stopping short of the threshold for traditional acts of war.

Welcoming an unrepentant Russia back to G7 would mean tacitly condoning Moscow’s hostile conduct. This would inevitably encourage other countries to assume that the previously accepted norms of international law no longer apply. At a time when the world’s leading democracies are looking to establish effective dialogue with an increasingly authoritarian and self-confident China, this is particularly relevant.

Russia’s initial membership of G8 in the late 1990s was a diplomatic gesture that aimed to encourage the country’s transition from Soviet authoritarianism to post-Soviet democracy. In light of subsequent events, this move now looks to have been premature. Any new attempt to revive Russian participation in G7 would be equally premature with consequences that could be significantly more dangerous.

Inviting Putin to the next G7 summit would legitimize Russian imperial aggression against Ukraine, normalize Kremlin hybrid warfare throughout the Western world, and encourage other authoritarian regimes to challenge the most basic principles underpinning today’s international security architecture. In an increasingly unstable and multi-polar environment, now is not the time to abandon the rules of the game.

Yuliia Popyk is a Fulbright Scholar currently studying for a Master of Arts degree in International Relations at Syracuse University.

Image: US President Donald Trump and Russian President Vladimir Putin meet at the 2019 G20 summit in Japan. Trump now plans to invite Putin to the G7 summit in America later this year, despite Russia's refusal to withdraw from Ukraine or end a wider international campaign of hybrid hostilities against the Western world. REUTERS/Kevin Lamarque