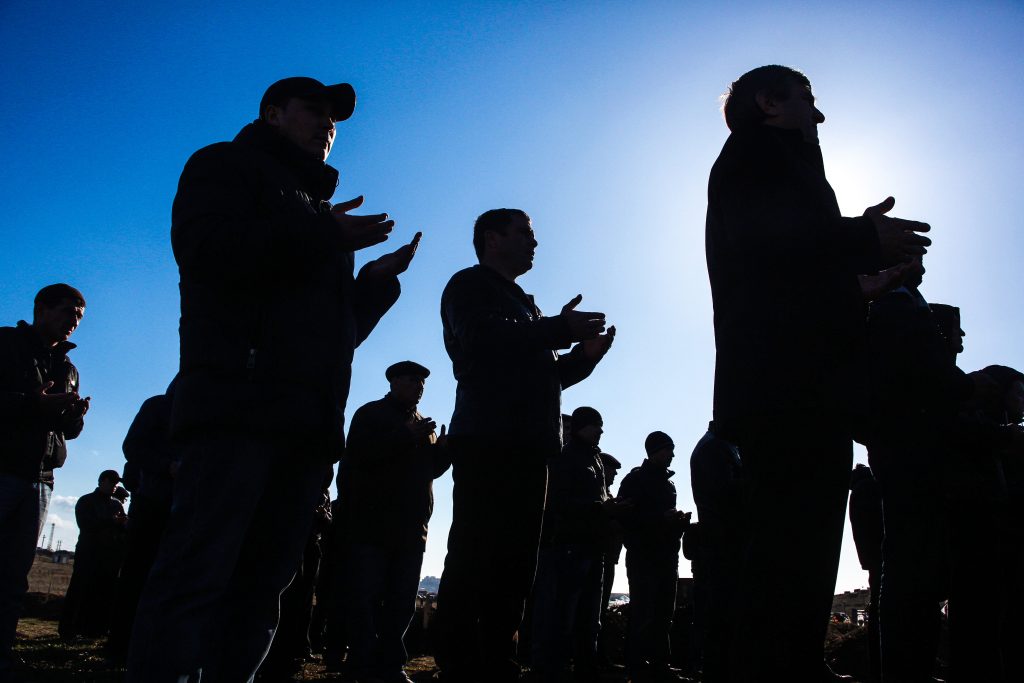 This week marks 76 years since Stalin deported nearly 200,000 Crimean Tatars from their homeland, but there will be no major commemorative events in their native Crimea. Ever since Russia’s illegal annexation in 2014, the peninsula’s indigenous people, the Crimean Tatars, have been denied the right to publicly remember their mass deportation. This ban on remembrance is just one particularly visible aspect of a far broader persecution campaign by the Russian occupation authorities that offers distressing echoes of Soviet crimes against humanity.

When the shock of Vladimir Putin’s Crimean crime was still fresh, the plight of the peninsula’s Crimean Tatar population generated considerable international attention. However, as the Russian occupation enters its seventh year with no end in sight, the fate of Crimea’s indigenous people is now in danger of fading from view. Despite grand promises made at last year’s deportation anniversary events, there has been little or no progress over the past twelve months towards addressing the ongoing attacks on the Crimean Tatars’ fundamental freedoms and the smothering of their collective memory, culture, and heritage.

Today’s low levels of international awareness reflect Crimea’s general disappearance from the geopolitical radar. Indeed, merely getting reliable information about the current situation on the peninsula is immensely challenging. Journalists, writers, and other truth-tellers have been silenced over the last six years. Ukrainian human rights NGOs have documented 369 cases of violations of free expression; the number of independent media outlets has decreased by around 90 percent; Ukrainian TV channels and radio stations have been denied the right to broadcast; and dozens of Ukrainian news websites have been blocked. Meanwhile, the international media is denied access altogether or closely chaperoned and prevented from challenging official Kremlin narratives.

Nevertheless, the fragmented and partial picture that does emerge is enough to set alarm bells ringing. The Russian occupation authorities in Crimea have detained and physically abused Crimean Tatars, raided their homes, and created an atmosphere of fear, trauma, and intimidation. Human rights organizations have officially documented at least 1500 violent incidents. Alongside a campaign of political persecution targeting today’s Crimean Tatar community, the Russian authorities have also sought to wipe out Crimean Tatar culture, heritage, identity, and memory.

Why is Russia persecuting the Crimean Tatars?

Ever since the Russian operation to seize control of Crimea began in February 2014, the Crimean Tatar community has consistently opposed the Kremlin takeover. Most Crimean Tatars boycotted the fig leaf “referendum” staged by Russia in March 2014 to legitimize the military seizure of the Ukrainian peninsula. Alim Aliev, director at Crimean House, an institution dedicated to preserving and promoting Crimean Tatar culture, explained this opposition by commenting, “Accepting the occupation of Crimea for us is like cutting off our right hand and saying that it is not needed.”

The Russian government, in need of pseudo-legal cover for its attacks on Crimean Tatars, has tarred them as terrorists and extremists. Many Crimean Tatars identify as Muslim. In 2016, Russia declared the Crimean Tatars’ historic self-governing body, the Mejlis, an extremist organization and abolished it. Dozens of Crimean Tatars have faced what Human Rights Watch calls “trumped up terrorism charges.” Authorities claim some Crimean Tatars are members of Hizb ut-Tahrir, an Islamic organization banned in Russia but not in Ukraine.

Despite claiming to be confronting militant Islam and other forms of extremism, Russia has launched attacks on a wide variety of Crimean Tatars who have spoken out against the occupation including journalists, photographers, and activists. These groups have formed the most visible and direct opposition to Russia’s occupation. Many have self-organized in the Crimean Solidarity movement. According to Freedom House, there are currently ten civic journalists imprisoned under spurious charges.

How has the Ukrainian government reacted to this ongoing repression of its citizens? With so many Crimean Tatar political prisoners behind bars, families were disappointed when the last prisoner swap between Ukraine and Russia in April this year did not include a single Crimean Tatar. In response, some members of the community initiated an online flashmob asking Ukrainian President Volodymyr Zelenskyy to finally “talk to them.”

Despite Russian attempts to paint Crimean Tatars as terrorists, the parents, wives, and relatives of those imprisoned have chosen non-violent ways to resist. They have organized robust support campaigns and rallies for their loved ones. Several prominent women activists have played key roles in these efforts. Lutfiye Zudiyeva is a children’s rights activist who has advocated on behalf of children whose fathers have been illegally imprisoned. Zudiyeva has been vocal about the need to reestablish investigative and professional journalism in Crimea, and has endured harassment and detention after participating in international advocacy campaigns.

Mumine Saliyeva, the coordinator of the Crimean Childhood NGO and wife of political prisoner Seiran Saliyev, was charged in 2019 alongside Zudiyeva for spreading “propaganda using extremist symbols” after organizing solidarity events. For years, these women have continued their advocacy around the world, fighting both for the return of their loved ones and the preservation of their traditions and culture.

Crimean Tatars now desperately need allies in Ukraine, in the rest of Europe, and around the globe. The US and European governments must acknowledge that Russia, as part of its annexation strategy, is ruthlessly repressing the rights of Crimean Tatars and attempting to quash their identity. And people all over the world need to speak out in defense of the many Crimean Tatars who are currently being held as political prisoners by Russia.

As the Crimean Tatar community marks the seventy-sixth anniversary of their Soviet deportation this week, an entire generation faces the prospect of another year living in terror at home or forced into exile. Much as the community had feared in 2014, history is indeed repeating itself. It is now up to the outside world to hold Putin accountable and prevent a sequel to one of twentieth century totalitarianism’s darkest chapters.

Polina Sadovskaya is PEN America’s Eurasia Program Director. Veronika Pfeilschifter is a researcher for PEN America based in Tbilisi, Georgia.

Image: Members of the Crimean Tatar community pictured during the funeral of Reshat Ametov in Crimean capital city Simferopol on March 18, 2014. Crimean Tatar Ametov was abducted and murdered in early March 2014 while protesting against the Russian takeover of Crimea. (Photo: Rafael Yaghobzadeh/ABACAPRESS.COM)