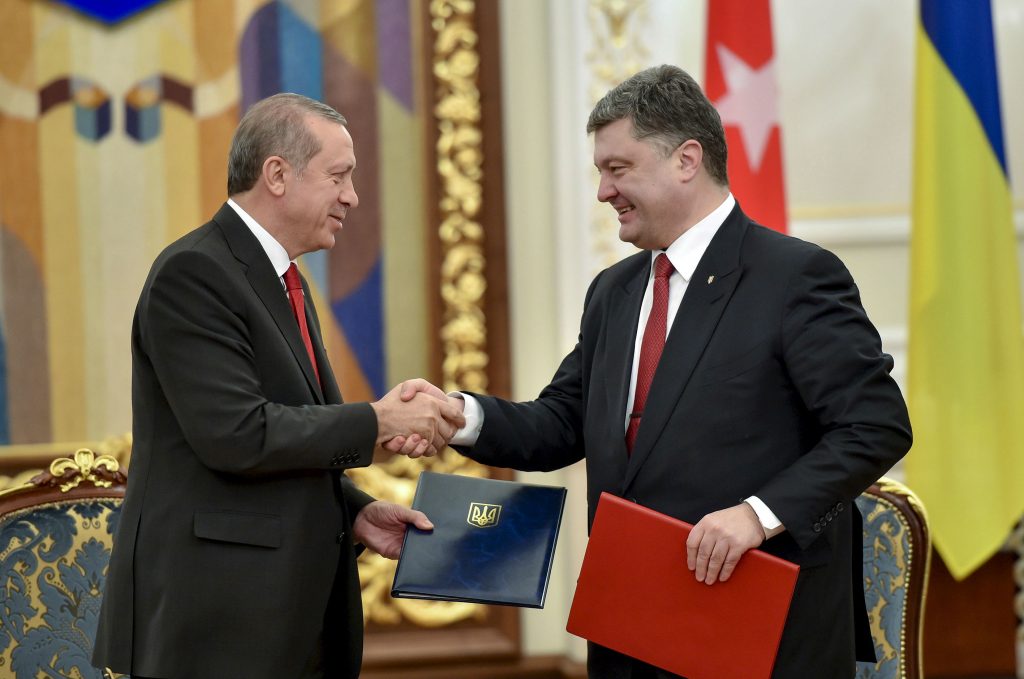 Turkey and Ukraine, including Crimea, control 71 percent of the Black Sea coast between the two of them. With Ukraine to the north and Turkey directly to the south, the two nations have long been collegial when working together on regional problems, but their reasonably friendly relationship has generally been subordinated to more pressing issues. Now, Russia’s actions in Crimea, the Donbas, and more recently in Syria have given a greater urgency to the development of the Ukrainian-Turkish relationship.

For many of the past fifteen years—the duration of Turkish President Recep Tayyip Erdoğan’s tenure—the country has focused most of its diplomatic and trade energies on two key areas. First, as the successor state to last Islamic caliphate, Erdogan’s Turkey has taken upon itself the mantle of leadership in the Middle East. Second, Turkey has continued to pursue its dreams of European integration. Meanwhile, Ukraine’s foreign policy interests were focused on balancing its European aspirations against its much deeper and more demanding ties with Russia.

Neither did Turkey and Ukraine work much together on trade. While some improvements in the trade relationship were made over time, trade with Russia was of greater interest to both countries. Turkey and Ukraine have similarly apportioned economies, and the two nations exported similar products (especially agriculture) to Russia.

In addition, Russia simply had more to offer Turkey than did a disorganized, discombobulated Ukraine. When Russia experienced an economic boom in the 2000s, Turkish construction firms and engineers expanded their operations into Russia, particularly to Turkic language-speaking areas like Tatarstan in southern Russia. Energy was also a major consideration. Turkey’s growing economy needed natural gas, and Russia had plenty to sell; as of 2013, Russia provided over half of Turkey’s natural gas needs. Turkey was also excited by the possibility of the now scuttled South Stream natural gas pipeline, and the short-lived Turkish Stream concept. In 2010, Turkey signed a deal that would enable Russian state-owned nuclear companies to build, own, and operate Turkey’s first nuclear power plant at Akkuyu.

But that relationship has recently and dramatically fallen apart. The Russian invasion and annexation of Ukraine’s Crimean Peninsula in 2014 was the first major strain. A large proportion of Crimean residents—12 percent according to the 2001 census, but likely much higher today—are indigenous Crimean Tatars, an ethnicity closely related to Turks that once headed a kingdom long a vassal of the Ottoman Empire. Accusations of abuse by the new Russian authorities of Crimean Tatars, many of whom would have preferred to remain within Ukraine, have not gone unnoticed by Turkey.

But the Russo-Turkish relationship continued largely unharmed until last autumn, when Russia began to move its forces into Syria. As Russian war machines came ever closer to the Turkish-Syrian border, and Russian bombing campaigns increased the flow of Syrian refugees into camps on the Turkish side of the border, Turks grew increasingly wary of Russian intentions.

The final rift in the relationship was the Turkish downing of a Russian Su-24 warplane that crossed momentarily into Turkish airspace in November 2015. In response, Russia has placed sanctions on Turkish goods, taken steps to expel Turkish workers and companies from the country, and placed restrictions on travel by Russian tourists to Turkey.

Turkey and Ukraine now find themselves united by opposition to Russia’s belligerence, as well as by their mutual need to find new markets for the products and industries that Russia now declines to allow within its borders. They are also bound in their concern for Crimea’s Tatars.

Both Turkey and Ukraine are now hopeful of quickly building on the strong foundation of their existing relationship. Ukrainian President Petro Poroshenko visited Ankara on March 9 and 10 for the fifth meeting of the Turkey-Ukraine Strategic Cooperation Council, a framework established in 2011 that has seen the abolition of visa regimes between the two countries and an increase in trade volumes.

Poroshenko’s visit to Turkey followed quickly upon the heels of a high-level Turkish delegation to Ukraine. In February, Prime Minister Davutoglu visited Kyiv and the two nations agreed to heighten their bilateral cooperation on defense production and procurement. Turkey and Ukraine plan to cooperate in turbojet aircraft engines, radars, military communications technologies and navigation systems.

A joint declaration by Poroshenko and Erdoğan on March 9 affirmed this increased focus on mutual security in the Black Sea region. Poroshenko noted, “Throughout the text of the declaration runs a common thread—the deepening of the strategic alliance between Ukraine and Turkey. Such cooperation is particularly relevant in light of Russian aggression and Moscow’s striving to impose its will in both Ukraine and in Syria…” And indeed, fully nine of the twenty-one points in the declaration pertain directly to matters of security, while three concern the Crimean Tatars.

For Ukraine, Turkey’s increased interest in and concern over the region’s security is a boon. Both nations are putting Putin on notice that, despite the Russian occupation of Crimea, they will do all in their power to ensure that the Black Sea does not become a Russian lake.

Hannah Thoburn is a research fellow at the Hudson Institute.