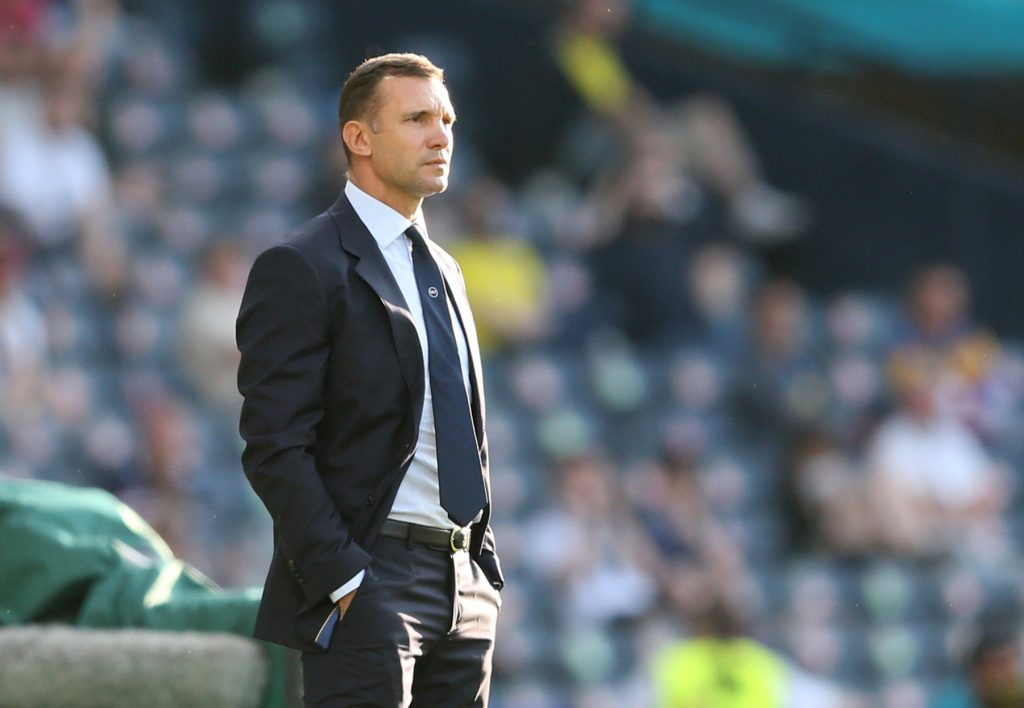 As Ukraine has slowly emerged from international anonymity since 1991, Ukrainian sports stars have played an often prominent role in putting the country on the global radar. Olympic champion gymnast Lilia Podkopayeva was an early example, taking gold at the Atlanta Olympic Games in 1996. Meanwhile, the Ukrainian presence in the world of boxing has consistently been disproportionately large, not least thanks to the unprecedented domination of the international heavyweight division by the Klitschko brothers from the early 2000s until the mid-2010s. However, it is in the footballing arena that Ukraine has garnered the most international attention, with no single figure doing more to promote Brand Ukraine than Andriy Shevchenko.

Ever since he first appeared on the scene in the mid-1990s, the forty-four year old Shevchenko has been quite simply the most famous Ukrainian in the world. Thanks to his recent exploits as a coach at Euro 2020, he has now made headlines in four separate decades. Throughout this period, Shevchenko has consistently represented his country with a winning combination of skill and class.

Andriy Shevchenko made his Dynamo Kyiv debut in 1994 at just eighteen years of age. He burst onto the international stage in 1997, announcing his arrival with a stunning first half hat-trick against Barcelona in Catalonia as Dynamo Kyiv romped to a memorable 4-0 Champions League victory over the Spanish giants. The result remains Barcelona’s heaviest ever home defeat in European competition. It sent shock waves through world football and made Shevchenko one of the game’s hottest properties overnight.

The following season, Shevchenko led the charge as his Dynamo Kyiv side came within a whisker of Champions League glory thanks to impressive victories over the likes of Real Madrid and English champions Arsenal. Dynamo advanced to the semi-final stage of the competition, where they surrendered a commanding 3-1 home lead against Bayern Munich to ultimately lose the tie 4-3 on aggregate.

This swashbuckling Champions League campaign was to prove Shevchenko’s last great contribution to his boyhood club. In summer 1999, he completed a USD 25 million transfer from Dynamo Kyiv to Italian powerhouse AC Milan.

Throughout the early 2000s, Shevchenko reigned as the uncrowned king of Milan. He hit the ground running, proving an instant hit with the Milanese supporters and finishing his debut season as the Serie A leading scorer with 24 goals in 32 matches. This set the standard for the following six years of excellence.

His goals helped secure a string of honors for Milan including the 2003 Champions League and the 2004 Italian Serie A league title. By the time he left the club in summer 2006, he had scored a remarkable 175 goals in 296 games, making him the club’s second highest all-time goalscorer.

Shevchenko’s time in Milan propelled him into the front ranks of global sporting superstars. He secured a dizzying array of lucrative sponsorship deals, attracted relentless media attention, and became personal friends with A-listers such as fashion legend Giorgio Armani. Indeed, Shevchenko met his future wife, the American fashion model Kristen Pazik, at an Armani party in Milan. He was also showered with personal honors including the coveted Ballon d’Or recognizing the world’s top footballer, which Shevchenko won in 2004.

The international spotlight on Shevchenko helped bring Ukraine itself out of the shadows. Thanks to the high profile of Italy’s Serie A in the 2000s, the Ukrainian striker enjoyed unrivaled global name recognition. Wherever Ukrainians traveled during the early years of the twenty-first century, they would frequently encounter people whose knowledge of Ukraine began and ended with the Italian exploits of Andriy Shevchenko. This made a pleasant change from the more typical response of blank looks or unflattering associations with the Chornobyl nuclear disaster and the Soviet Union.

Following the highs of Milan, Shevchenko’s later playing career was to prove somewhat anti-climatic. His three-year stint with Chelsea in the English Premier League ended with little fanfare, and was followed by an underwhelming return to Dynamo Kyiv.

Shevchenko ultimately brought the curtain down on his playing career in some style, scoring both goals as Ukraine recorded the country’s first ever European Championship victory in summer 2012 with a 2-1 win over Sweden in Kyiv. This Euro 2012 glory was a fitting end to the Ukrainian legend’s international career. After earning his first cap while still a teenager in 1995, Shevchenko went on to captain the Ukrainian national team to the World Cup quarter-final in 2006. He remains Ukraine’s all-time record goalscorer with 48 goals in 111 appearances.

After hanging up his boots, Shevchenko embarked on a brief and inglorious foray into Ukrainian politics before returning to football in a new coaching role. Based largely on his illustrious reputation as a player, the inexperienced Shevchenko was unveiled as manager of the Ukrainian national team in 2016. Many were initially unimpressed by this appointment, but Shevchenko went on to prove his doubters wrong.

The former golden boy led Ukraine to the 2020 European Championship ahead of reigning European champions Portugal. This summer, he guided the Ukrainian team to their first ever quarter-final appearance at the postponed Euro 2020 tournament. Throughout Euro 2020, international media coverage of Ukraine tended to focus on Shevchenko, underlining his enduring status as the country’s most famous face and global talisman.

Throughout his career, Andriy Shevchenko has never been a particularly vocal patriot. Indeed, he has even faced criticism for refusing to speak Ukrainian during press conferences, and has alienated some fans with his political choices. Nevertheless, over the past 25 years, Shevchenko has probably done more than any other individual to raise Ukraine’s international profile and create a positive impression of the country on the world stage.

Foreigners visiting Ukraine for the first time sometimes mistakenly assume that the many streets, parks, and boulevards named in honor of national bard Taras Shevchenko are actually tributes to his footballing namesake Andriy. While it is no doubt premature to begin recognizing Andriy Shevchenko in this manner, it is surely only a matter of time before he is acknowledged for his historic contribution as independent Ukraine’s ultimate unofficial ambassador.