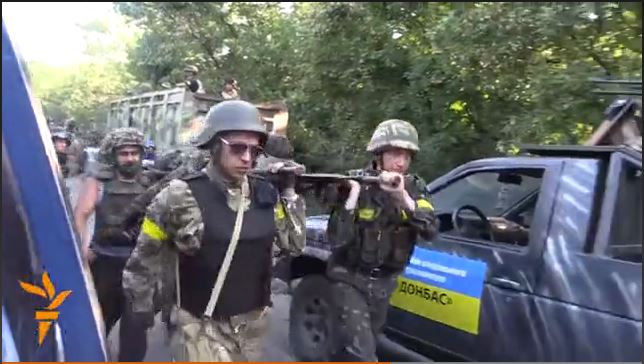 Donbas War Will Last All Year; May Be Settled With Early Parliament Election, Mefford Writes

How predictable is Ukraine’s coming year, given its financial crisis, its untested new government and, above all, its war against Russia and its proxy forces in the southeastern region of Donbas? Not very predictable, notes the Atlantic Council’s Kyiv-based senior fellow, Brian Mefford. But good analysis can help, and Mefford surveys the landscape of this crisis to offer eight predictions as we start 2015:

1. Expect Donbas to remain a “frozen conflict.” Ukraine’s government can do almost nothing to reverse the grip of Russian forces and their proxies on the southern zone of Donetsk and Lugansk provinces. It has no military option. (Who outside of NATO can defeat the Russians in combat?) With Ukraine’s economy in recession, and with no money to lure Donbas’ people to Kyiv’s side in the conflict, Kyiv also lacks an economic solution. Diplomacy also cannot solve this, notably as Russia holds a veto in the “Minsk process,” the most active forum for efforts to negotiate a solution.

Russia holds the cards, and until its drive to divide Ukraine subsides, Donbas will remain occupied and in political purgatory. The solution may come in early 2016 (see prediction number seven, below) but until then, the chance of Donbas remaining a “frozen conflict” is 80 percent.

2. Expect tension between the government and the oligarch Ihor Kolomoyskyi. Last year’s hero can often become this year’s goat. Kolomoyskyi, the banking billionaire, was appointed governor of the critical province of Dnipropetrovsk in 2014. His financing of the Ukrainian army was critical to the war effort, which made him “Public Enemy Number One” with the Kremlin. At the same time, his business expansion and practices in 2014 made him “Public Enemy Number One” with most of Ukraine’s other oligarchs (Rinat Akhmetov, Viktor Pinchuk, Ihor Yeremeyev, etc.). Poroshenko and Yatsenyuk needed Kolomoyskyi when Russia was actively on the military offensive. But now they will see him as weighty cargo that needs to be jettisoned before Ukraine can arrive in Europe. Tensions are already on, as  Kolomoyskyi’s faction (Economic Development) in the new parliament withheld support in last week’s vote on the budget. It’s only a matter of time before Kolomoyskyi goes into open opposition against the reforms that Kyiv is pushing. However, Kolomoyskyi’s role in keeping the strategic, front-line oblast of Dnipropetrovsk solidly on the government’s side represents a huge “get out of jail free” card.

The trick for Poroshenko and Yatsenyuk will be to contain Kolomoyskyi to Dnipropetrovsk while taming his ambitions to influence in other provinces. So the chance of greater tensions between the government and Kolomoyskyi is 75 percent.

3. US-Russia relations will not significantly improve. The back-channel efforts by President Barack Obama and Secretary of State John Kerry to improve relations with Moscow will produce no major successes in 2015. Even attempts to separate the annexation of Crimea from the war in the Donbas will yield little result as they are easier to do on paper than in practice. Having lost both Houses of Congress, Obama has entered the lame-duck stage of his presidency and daily speculation increases about a 2016 presidential contest between the Bush and Clinton dynasties.

Russian President Vladimir Putin isn’t particularly warming toward improved ties with the White House – despite his new economic woes. Instead Putin is likely to build (or rebuild) relationships with the foreign policy teams of the Bush and Clinton camps rather than try to strike a deal with Obama (who may not be able to get legislation for a deal passed by Congress). That is not to say that Obama might not unilaterally lift some sanctions against Russia (see prediction number five below), but public perceptions of one another will remain at their worst since the Cold War. Thus, the chance of US-Russian relations NOT significantly improving is 65 percent.

4. Ukrainian local elections in October will produce many new regional leaders and parties. While the exact election system to be used in nationwide local polls remains in limbo, the mood of the electorate is such that a tidal wave of change is likely. After all, this vote will follow upon revolution, war and recession. The potential for decentralization leading to local budget control and decision making (see prediction number seven below) will encourage new leaders to enter politics. The success of the newly formed Samopomich (Self-Reliance) party and the Opposition Bloc in last October’s parliament elections is a sign that new parties have real opportunities to score breakthroughs in this year’s mayoral and city council races.

While some incumbent mayors such as Andriy Sadoviy in Lviv, Vitaliy Klitschko in Kyiv, and Serhiy Odarych in Cherkasy are likely to win re-election, they will be the exceptions rather than the rule. So the chance of local elections producing a crop of new, regional leaders is sixty percent.

5. US-European sanctions on Russia may be relaxed. US-Russian relations will not likely improve in 2015 (see prediction number three) in part because, in US domestic politics, which presidential candidate wants to be “pals with Putin”? Still, the chances are decent that some of the sanctions may be relaxed or removed – specifically those on Russian businesses imposed due to the war in Donbas. The Obama administration and the Europeans have been reluctant from the beginning to impose the sanctions and have been sending signals for months that the sanctions can be relaxed at the slightest gesture from the Kremlin. (Both the US and Europe will keep the Crimea-related sanctions in place, as they cannot accept or recognize Russia’s annexation of the peninsula.) If Donbas stays “mostly” quiet for the next few months, if Putin plays nice on the playground and pulls back some of his troops from the border, and if he makes some conciliatory gestures such as promising not to supply the Donbas terrorists with more weapons (wink, wink; nudge, nudge)—then expect the West to melt like butter. Sanctions against individuals are likely to stay in place but for economic reasons, the others will begin to be lifted.

The West will pat itself on the back at having stood up to Putin while Putin will chuckle about how Westerners are so naïve. Thus, the chance of sanctions on Russia being relaxed is 50 percent.

6. Early warning! Expect early parliamentary elections in 2016. While these are predictions for 2015, this year is likely to be shaded by a development that won’t fully mature until 2016. Discussion already is underway among political elites here in Kyiv about the new parliament “not lasting long,” with the notion that early elections may be called for 2016 as part of a broader compromise to end the standoff in Donbas. The theory goes like this: The pain of a slashed government budget and a shrunken war economy means the public will tire of the current government this year. The economic reforms to be imposed for longer-term recovery won’t produce new economic growth any time soon.

That will help improve the chances for Russia to play a “new elections” card in the fight over Donbas. There is precedent for this: In 2007, new elections were a way out of the deadlocked power struggle between then-President Viktor Yushchenko and parliament. Snap elections last year created the way out of the impasse following the departure of President Viktor Yanukovych. The Kremlin knows that the West is almost certain to jump at the prospect of new elections (and that it will accordingly pressure Kyiv) as a way to try settling the Donbas conflict and presumably return it to Ukraine’s control (albeit within a more decentralized, if not federalized, system of Ukrainian governance).

Russia may play the card late this year by stirring the pot of Ukrainian resentment against the government of President Petro Poroshenko and Prime Minister Arseniy Yatsenyuk. (Moscow will be helped in this, ironically, by the economic recession created largely by the official looting of Ukraine by Yanukovych, and by the Kremlin’s war on Donbas). The official rhetoric of the Kremlin and its proxies will be about empowering eastern Ukraine to ensure its representation in government, and about bringing an end to the war. But the Kremlin’s real goal will be to secure a more Russia-friendly parliament for Ukraine than the one now in power. Politics, like gambling, is about timing. You truly have to “know when to hold ‘em, [and] know when to fold ‘em.” The Kremlin simply folded on 2014’s election but is planning to “double down” on elections in 2016. The idea of new parliamentary elections for Ukraine is not very exciting right now, but it does reduce the chance of Donbas becoming a permanent “frozen conflict” from 85 percent (see prediction one, above) to potentially 25 percent. Thus, the chance of snap parliamentary elections in 2016 is 45 percent.

Technically the parliamentary coalition has the 301 votes needed to pass any constitutional changes, including a decentralization of government powers to the country’s provinces. In practice, the coalition is weakened by a variety of cross-cutting financial and political interests. The budget vote showed this last week when it gathered just 233 ‘yes’ votes (only seven more than the minimum required for passage). Worse, the government’s problem in finding the votes to change the constitution will only deepen during the year, as ordinary Ukrainians feel the pain of the economic recession. The government is almost certain to have a lower approval rating by the time those reform bills are presented for passage in parliament (sometime before October). Check the numbers in the table below:

Even if the governing coalition can get every member of its three semi-cohesive factions (the Poroshenko Bloc, People’s Front, and Samopomich) to support the reforms, that gives them only 264 votes—thirty-seven short of the number needed for passage. That means that the governing coalition must persuade two of the other four factions (excluding the Opposition Bloc which is almost certain to be opposed) to get the needed votes for reform. Let’s assume that the pragmatic Ihor Yeremeyev (who backs the People’s Will faction) might be the “low-hanging fruit” on the persuasion tree. That still leaves the government needing to win support from Ihor Kolomoyskyi, oligarch Dmitro Firtash and/or former Prime Minister Yuliya Tymoshenko. None of these has a reputation as a particularly amicable negotiator. Any of them will extract massive concessions in exchange for supporting the constitutional reforms. As of now, the chance of constitutional reform and decentralization passing is 40 percent.

8. Putin renews the shooting in Donbas, but probably avoids expanding his war against Ukraine. Last, let’s consider the question for which everyone wants the answer—but only one person can have it: Mr. Putin himself. (In fact, even he may not know it now, and will decide only later.) Despite Putin’s inscrutability, a broad consensus is coalescing that the war is winding down. That’s because the battles in Donbas have lessened since early September, and Russia is feeling the economic pain of the collapses in the price of oil and the ruble’s value. And Putin also has seen the political risks for him at home of heavy casualties among his troops.

Still, Putin has excelled in doing the unexpected in 2014 and nothing suggests a change in his character. Will he increase the shelling of Ukrainian forces in Donbas as a negotiating tactic? Probably. Will he invade eastern and southern Ukraine? Probably not. Nonetheless, what analyst predicted Saddam Hussein’s invasion of Kuwait in August 1991? Thus, the chance of Putin expanding the war against Ukraine in 2015? 30 percent.