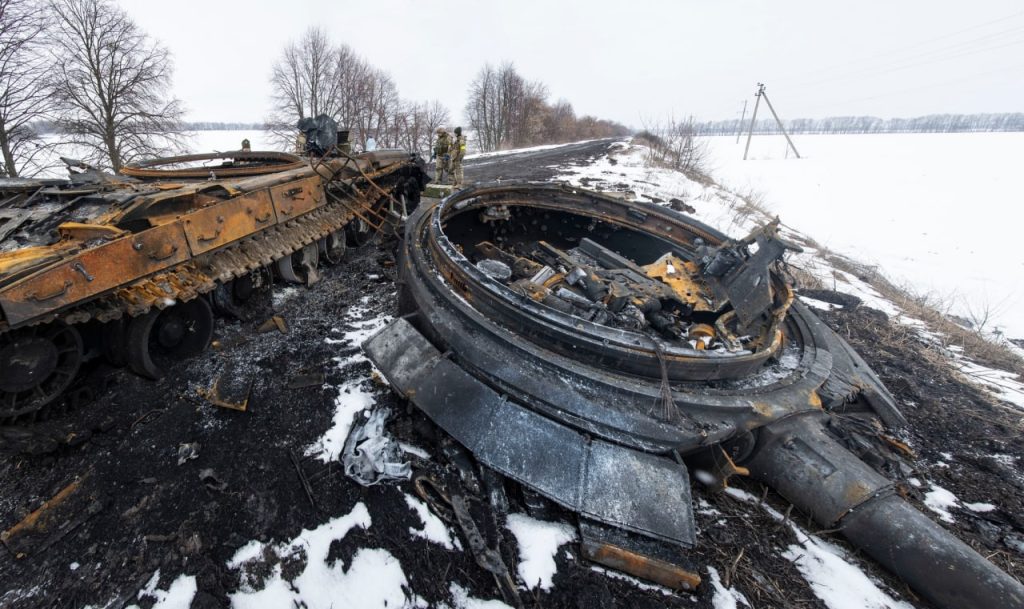 Less than two weeks into Putin’s Ukraine War, the conflict has already left much of the country in ruins. After encountering unexpectedly tough resistance from Ukrainian forces in the initial days of the invasion, the Russian military has since focused its efforts on the indiscriminate bombing of Ukrainian towns and cities.

These terror tactics have resulted in countless atrocities and a rapidly rising civilian death toll. Russia’s attack has also destroyed Ukrainian infrastructure and decimated the country’s economy. In order to prevent a complete economic collapse, the international community must now urgently provide Ukraine with tens of billions of dollars in emergency funding.

Even greater sums will be required for the rebuilding of Ukraine. Assuming the majority of today’s Ukraine emerges from the current conflict unoccupied, this reconstruction program promises to be the biggest undertaking in modern European history. Entire new cities will eventually rise from the rubble, transforming the country and helping to guarantee the European future Ukrainians are fighting for.

How much will all this cost? Polish Prime Minister Mateusz Morawiecki recently stated that the European Union should establish a EUR 100 billion fund to rebuild Ukraine. This may be a conservative estimate. If Russia continues to bomb Ukraine at the current rate, we can expect the costs of the war to be much higher, perhaps even reaching over USD 1 trillion.

The international community’s immediate priority must be to prop up the Ukrainian economy. Ukraine needs its allies to launch a fund that will pump billions of dollars into its economy on a monthly basis in order to counter the catastrophic losses incurred due to Putin’s war.

The West has so far contributed some financial aid packages to Ukraine, but these have mainly consisted of low-interest debt. For example, the US has recently contributed an additional USD 1 billion in financial support in the form of a loan. This needs to change immediately. We all know that the reason the Marshall Plan was so successful in rebuilding war-torn European countries after World War II was because it provided predominantly grant money.

A country fighting off a military superpower cannot accept regular financing in the form of ordinary loans from the IMF and other international financial institutions. Ukraine is not Greece. It did not bring on an economic crisis due to financial mismanagement. Instead, Ukraine is the innocent victim of Europe’s first full-scale military invasion since the days of Adolf Hitler.

Crucially, loans do not provide assurance to the average Ukrainian that their economy is holding up. As they fight Russia alone, should Ukrainians also be worried about mounting debts that will eventually have to be repaid?

Above all, the international community must recognize that Ukraine is not simply fighting for itself; it is defending the entire post-World War II international order. The very least the West can do is help Ukrainians stay financially afloat and provide funds for the reconstruction of their shattered country.

A multi-billion dollar fund would have both symbolic and organizational significance. It would help the world to understand the scale of Ukraine’s losses as a result of Russian aggression. Ukrainians would also be reassured that their economy is backed by the entire democratic world. This would underline the extent of international support for Ukraine and strengthen the country’s resolve to resist the Russian invasion.

There are various ways this can be done.

For example, much as the US implemented a stimulus package for its citizens during the Covid pandemic, Ukraine could also adopt a stimulus package with Western financial backing and distribute payments direct into the personal bank accounts of Ukrainian citizens. Instead of international financial aid going through non-transparent government structures, ordinary Ukrainians would directly benefit.

One of the problems with such initiatives would be the accessibility of funds. Indeed, much will depend on how the war unfolds. For example, will Ukrainians even be able to use their bank cards? Will there be products in Ukrainian stores to purchase? To minimize this risk, money could potentially be stored for distribution once the war is over.

According to some estimates, Ukraine needs a minimum of USD 10 billion per month to make up for its losses due to Russia’s invasion. This might seem like too much at first glance but it is doable, especially if a broad coalition of nations is mobilized.

Ukraine’s economy is bleeding out quickly and needs major financial assistance without delay. A global fund would be as important as tanks, javelins, and sanctions in the battle to defend Ukraine against Russian aggression. This must be viewed as both a strategic priority and a moral obligation for the entire democratic world.