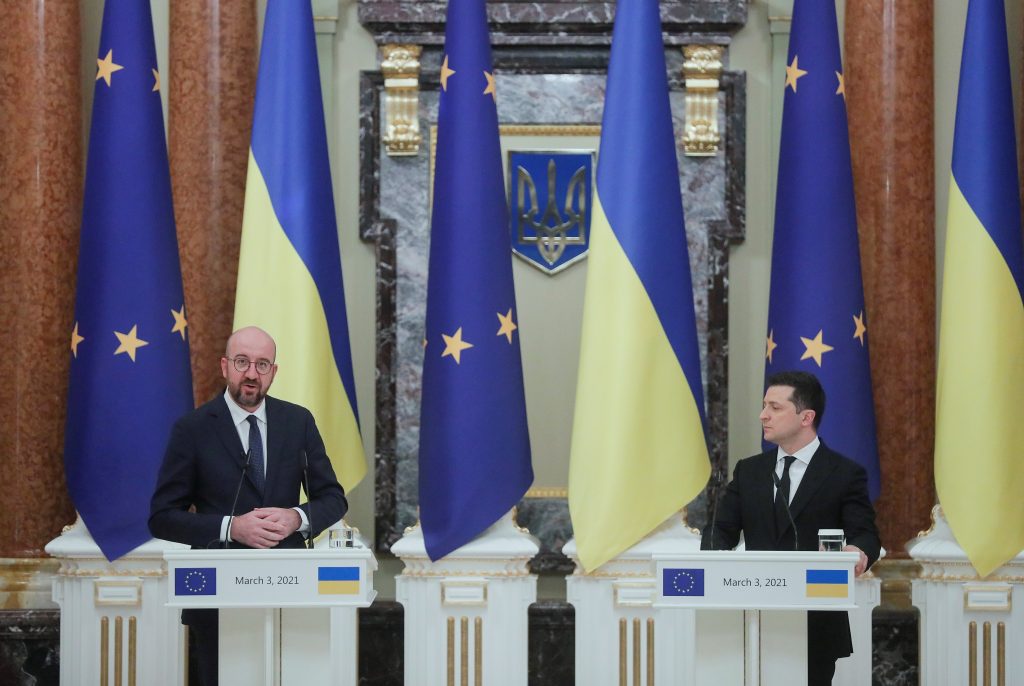 US Secretary of State Antony Blinken made clear during his May 6 visit to Kyiv that Washington expects to see greater progress in Ukraine’s fight to counter corruption and establish the rule of law. Blinken’s comments reflected mounting disquiet among Kyiv’s international partners over a perceived lack of reforms in the country, while also underlining the broader geopolitical significance of Ukraine’s transformation.

American pressure is not the only tool to encourage a more rigorous approach towards Ukraine’s reform agenda. The landmark 2014 Association Agreement between Ukraine and the European Union also includes numerous specific clauses which oblige the Ukrainian authorities to continue along the reform path laid out seven years ago. In order to make progress, Ukraine’s vibrant civil society must hold the country’s leadership to these commitments and help Brussels identify any opponents.

Despite the enormous sacrifices of the past seven years, it is clear that Ukraine has yet to break irreversibly with the corrupt past and establish genuine rule of law in the country. Nobody is more keenly aware of this failure than ordinary Ukrainians. Frustration with the country’s political classes propelled political novice Volodymyr Zelenskyy to a landslide victory in the 2019 Ukrainian presidential election in what was one of the most remarkable protest votes in European history. Two years on, Zelenskyy himself now stands accused of stalling or backsliding on key reforms.

Ukrainians desperately want a political system free from oligarch dominance along with a judiciary where the courts act independently and judges perform their functions without fear or favor. Despite some progress, these goals remain almost as distant today as they were prior to Ukraine’s 2013-14 Revolution of Dignity.

One of the most encouraging developments of the past seven years has been the signing of an Association Agreement between Ukraine and the EU. This landmark is often cited by Ukrainian politicians are proof of their democratic credentials and commitment to European integration. It is popular to stress the benefits of the Association Agreement such as free trade and visa-free EU travel, while at the same time calling on Brussels to expand its assistance and open up its markets further.

Far less attention is paid to the obligations contained within the Association Agreement that commit Ukraine to safeguarding democratic principles, fighting corruption, and pursuing judicial reform. It is easy to understand why Ukrainian politicians rarely dwell on these commitments. Perhaps more surprisingly, Ukrainian civil society activists have also made little use of the country’s Association Agreement obligations in their regular struggles with political forces seeking to block reform.

There seems to be a common misconception among politicians and reform-focused NGOs in Ukraine that the commitments contained in the Association Agreement are mere “appeals” without any legal weight or consequences. This is incorrect. In reality, the Association Agreement is unambiguous, specific, and legally constraining with regard to the obligations it sets out for Ukraine to establish rule of law, implement judicial reform, and fight corruption.

From the very first pages, the wording of the Association Agreement makes clear that it is based on the “common values” of democracy and the rule of law. These values are identified as “essential elements” of the agreement, underpinning its entire meaning and justifying its existence.

The first four articles in the Agreement confer obligations for action on Ukraine, while also placing reforms at the heart of the relationship. “The rule of law, good governance, and the fight against corruption are central to enhancing the relationship between Ukraine and the EU,” it states. The chapter on political dialogue contains further proof of Ukraine’s obligation to advance reforms aiming at “strengthening democratic principles and the rule of law.”

An entire section of the Association Agreement addresses Ukraine’s domestic reform agenda, with particular attention paid to judicial reform. It specifically identifies improving the efficiency of the Ukrainian judiciary as a key focus for cooperation.

Further proof of Ukraine’s obligations can be found in article 476 of the Association Agreement, which states unambiguously: “Ukraine shall take any general or specific measures required to fulfill its obligations under this Agreement and ensure that its objectives are attained.”

It is obvious that Ukraine is not currently living up to its reform obligations under the terms of the Association Agreement. Since 2014, various attempts at judicial reform have proved ineffective, while the performance of Ukraine’s new anti-corruption institutions has so far been underwhelming. Questions remain over President Zelenskyy’s political commitment to wholesale reform, while oligarch influence in parliament and the economy is still extensive.

Despite this record of underachievement and disappointment, there can be little doubt that the vast majority of Ukrainians continue to support demands for fundamental change. Likewise, the international community recognizes that Ukraine’s transformation into a democratic success story is the best possible response to ongoing Russian aggression.

In order to help get Ukraine’s reform drive back on track, the country’s civil society community must draw attention to the reform obligations contained within the Association Agreement and highlight areas where Ukrainian politicians are falling short. This means informing Ukrainian audiences and the media. It also means providing Brussels with specific information on those responsible for blocking reforms, whether the offenders are civil servants, politicians, or oligarchs.

Willem Aldershoff is a Brussels-based international affairs analyst and former unit head at the European Commission.