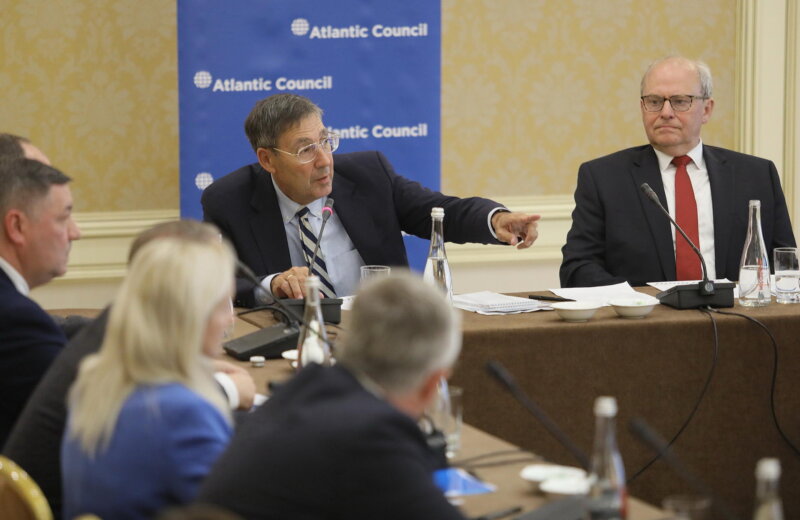 At the request of several leading Ukrainian businessmen, the Atlantic Council has assisted them to work out fifteen key principles for economic policy and judicial reform in Ukraine to further develop the Ukrainian economy. Ambassador John Herbst and I presented the principles at a press briefing in Kyiv, Ukraine, on September 16 in the presence of most of the businessmen or their representatives.

The fifteen principles reflect a broad reform consensus in Ukraine, aiming at creating well-functioning markets and strong private property rights. They are not designed to be original but single out what is most important for Ukraine now. By and large, these principles coincide with the declarations of the new Ukrainian government.

Key principles for economic policy and judiciary in Ukraine

Ukrainian business leaders commit to principles of rule of law and economic policy in Ukraine.

One group of principles concern the rule of law. They call for reform of the prosecutor general’s office, improvement of judicial reform to enhance judges’ integrity, the abolition of the economic crime department of the Security Services of Ukraine, and the completion of anticorruption bodies. They advocate strict conflict of interest rules for public officials and parliamentarians.

Most of the declaration deals with standard market economic reforms. The focus lies on structural reforms, such as the unification and marketization of energy prices, the abolition of unregulated monopolies, the elimination of obsolete regulations and inspections, and transparent and competitive public procurement and sales. An expected demand is the simplification and improvement of the tax and customs systems. Macroeconomic issues are no longer high on the agenda, while the need to maintain the independence of the National Bank is included.

The business leaders also support the legalization of private sales of agricultural land and privatization through transparent and competitive auctions of non-strategic state assets, and that the ultimate beneficial owners of enterprises and other assets of significance be made public. Once ownership of enterprises has been declared, they want their legitimacy to be honored.

The only international issue mentioned is a desire for European integration. The business leaders wanted to stay out of politics, so the declaration contains no political items. On the contrary, the businessmen concluded that they aspired to such conditions that leading businessmen no longer would have to go into politics to defend their legitimate rights.

At the press briefing, all the business leaders or their representatives who spoke underlined their support for these principles. Serhiy Tihipko of the TAS Group spoke first. He emphasized that this was a sound piece of work and that it should be continued. This activity should not be seen as political but this group wanted to work with the government and hoped that we would contact the new president and prime minister.

We have sent it to the prime minister, minister of finance, minister of economy, and chair of the central bank, and the first reactions that we have received have been entirely positive, as one would expect since our principles coincide with the current government program. Although the principles had been concluded in the summer, we launched them now after the elections and the formation of the government so it would not be seen as interfering in party politics.

Oleh Bakhmatiuk of UkrLandFarming, Ukraine’s biggest agricultural group, concurred that this presentation of key principles was only a first step and that this group would follow up on what was being done. As a big exporter to the European Union, he focused on the benefits of European integration.

Rinat Akhmetov had issued a special declaration in support of the fifteen principles, which his director of investor relations Jock Mendoza-Wilson read.

The press briefing attracted great interest. The first question was naturally about how the businessmen had been selected. Several of the richest men in Ukraine were not included. Our selection had been somewhat idiosyncratic and accidental, but only two of the big businessmen whom we had approached declined. We had been positively surprised by the enthusiasm among the businessmen.

The discussion at the press briefing concerned the background of the project and how to move forward rather than the content of the principles, because the current Ukrainian public debate is characterized by a great deal of consensus on substance, and both the leading businessmen and the new government share this consensus. Now the question is what can actually be accomplished.

Anders Åslund is a senior fellow at the Atlantic Council and author of the new book “Russia’s Crony Capitalism: The Path from Market Economy to Kleptocracy.” Follow him on Twitter @anders_aslund.