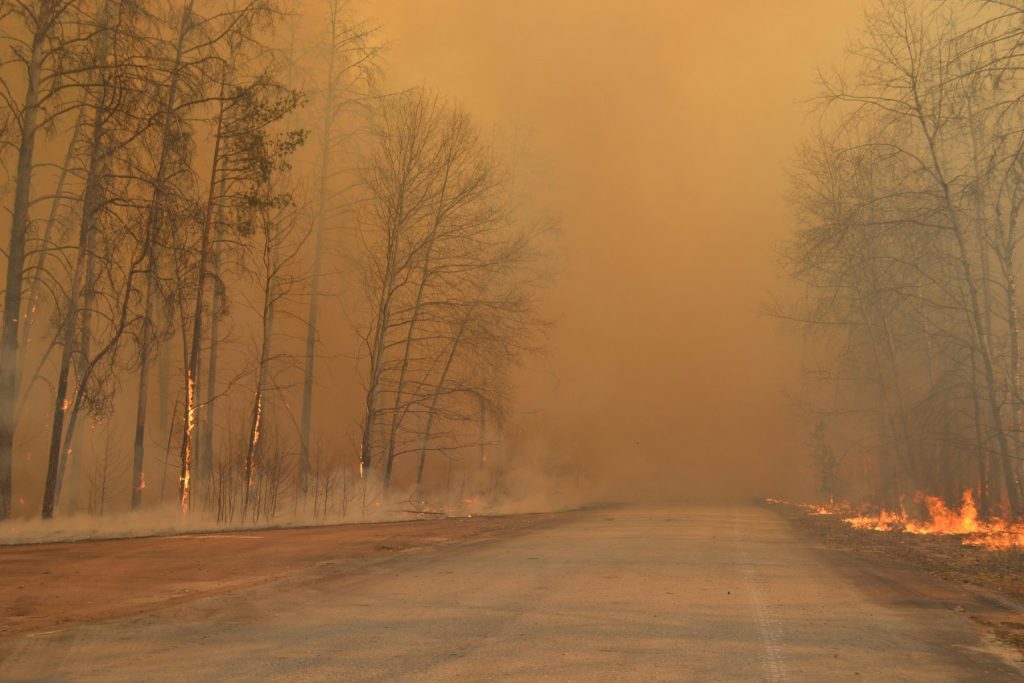 Fire rages in the exclusion zone around the Chornobyl nuclear power plant in Kyiv region. April 10, 2020. State Emergency Service of Ukraine via REUTERS

As war-torn and pandemic-hit Ukraine entered April 2020, the last thing the country needed was more drama. Unfortunately, that is exactly what happened. For much of the month, the coronavirus crisis and the ongoing conflict with Russia were both temporarily overshadowed by a spate of forest fires in the Chornobyl Exclusion Zone that generated lurid international headlines and plunged Kyiv into apocalyptic gloom. These blazes exposed Ukraine’s unpreparedness for such emergencies and served as a grim warning of what may lie ahead during the long summer months in a country parched by an abnormally warm winter season that saw record high temperatures and virtually no snow.

When news of forest fires in the Chornobyl Exclusion Zone first started to emerge in the days following April 4, it soon became a hot topic on Ukrainian social media (no pun intended). With most Ukrainians already stuck at home in the fourth week of coronavirus quarantine, images began spreading of woodland blazes along with satellite maps indicating proximity to the infamous atomic energy plant. For many in nearby Kyiv, the fires brought back memories of the 1986 nuclear disaster and sparked fears of a new atomic threat as acres of radioactive woodland went up in flames.

When the wind changed direction and began blowing directly towards Kyiv, a dense and ominous smog almost completely enveloped the sprawling Ukrainian capital. With trademark gallows humor, some Ukrainians likened the grim scenes to the advent of a biblical plague and wondered whether the River Dnipro would soon turn red. The accompanying air pollution, however, was no laughing matter. By the middle of April, Kyiv had risen to first place among the world’s most polluted cities according to global air pollution ranking IQAir. Kyiv’s scores of 380 and 429 on April 16-17 were more than double the pollution levels registered in Indian capital Delhi and other cities more traditionally associated with chronically poor air quality.

The Ukrainian Health Ministry responded to the smoky scenes by issuing somewhat redundant guidelines for Kyiv’s already quarantined residents to remain indoors. While the smoke shrouding the city posed obvious health risks, authorities were quick to downplay fears of a radiation threat. Officials from Ukraine’s State Emergency Service assured that radiation levels remained within the normal range everywhere except for the areas closest to the fires inside the Chornobyl Exclusion Zone itself. These claims were corroborated by numerous independent third parties monitoring the situation including tour guide Kateryna Aslamova, who was taking radiation readings in Kyiv’s picturesque riverside Podil district at the height of the wildfires on April 15.

Ukrainians were quick to praise the efforts of the firefighters working in the Chornobyl Zone, but there was also concern over an apparent lack of sufficient manpower and equipment to extinguish the blazes. Since the forest fires first began, Chornobyl tour operator Yaroslav Yemelianenko led calls for the authorities to take stronger action. He also became involved in a volunteer drive to support the firefighters, working with the Association of Chornobyl Tour Operators to deliver much-needed provisions. According to Yemelianenko, the April 2020 blazes were the largest in the history of the Chornobyl Exclusion Zone. He said the severity of the wildfires underlined the need for a serious and comprehensive government response.

The global brand recognition that Chornobyl continues to enjoy meant April’s fires generated a flurry of international media coverage. Ukraine’s leaders were somewhat slower to react. President Zelenskyy did not address the situation publicly until the tenth day of the fires following reports that the blaze was rapidly approaching the site of the former atomic energy plant. At around the same time, the Ukrainian parliament voted to significantly increase fines and penalties for anyone caught burning vegetation or breaching forest fire regulations. Meanwhile, sixteen days after the fires first began, Ukrainian Interior Minister Arsen Avakov announced the launch of an operation to combat arson in the region’s woodlands.

The exact cause of the fires remains undetermined. Some have been quick to suggest that the fires may have been started deliberately in order to create a new front in Russia’s ongoing hybrid war against Ukraine and further destabilize the situation in the country. Others have pointed the finger at more mundane arson. The widespread practice of burning crop stubble and other vegetation is also a possible contributing factor.

While the debate continues over the causes of the wildfires, the consequences are already all too clear. Yemelianenko says the impact of the recent blazes has been disastrous for nature, history and tourism. All three are deeply intertwined. In the 34 years since the Chornobyl Exclusion Zone was largely abandoned following the April 1986 nuclear disaster, it has become home to a unique collection of wildlife and fauna. This thriving ecosystem is now in grave danger.

Denys Vyshnevskiy of the Chornobyl Biosphere Reserve says valuable plant life and many smaller species may have been lost in the recent fires, which left large areas of woodland devastated. The fragmentary nature of the blazes gives reason to hope that some animals survived, with larger species including the zone’s rare Przewalski’s wild horses along with wolves and bears managing to flee. The ecologist argues that fires pose an unacceptable threat to the future of the zone not only because of the physical damage done to the forest, but because of the potential to cause spikes in radiation.

In addition to the irreplaceable loss of Chornobyl’s unique nature, the wildfires also destroyed a number of settlements and historic buildings. “A total of 12 villages were lost in the flames, including some well-known tourist sites,” confirmed Yemelianenko. “Overall, the Chornobyl tourism industry lost about one-third of our assets, many of which were in the process of being added to UNESCO’s heritage list.”

The Association of Chornobyl Tour Operators is now raising money for firefighters and residents in and around the Exclusion Zone who lost their homes in the fires. With international interest in Chornobyl tourism currently at record highs thanks to the global success of HBO’s 2019 TV miniseries “Chernobyl”, it is hoped that routes can be adapted and restored to enable the continued expansion of the local tourism industry despite recent damage.

Nevertheless, it is clear that Ukraine is currently ill-equipped to deal with major forest fires. This is particularly alarming given the extremely dry conditions throughout the country. The Ukrainian authorities would be well advised to learn the lessons of April’s Chornobyl fires and prepare for more of the same during the coming months. Government officials should also follow up on recent EU offers to provide international assistance in combating future forest wildfires.