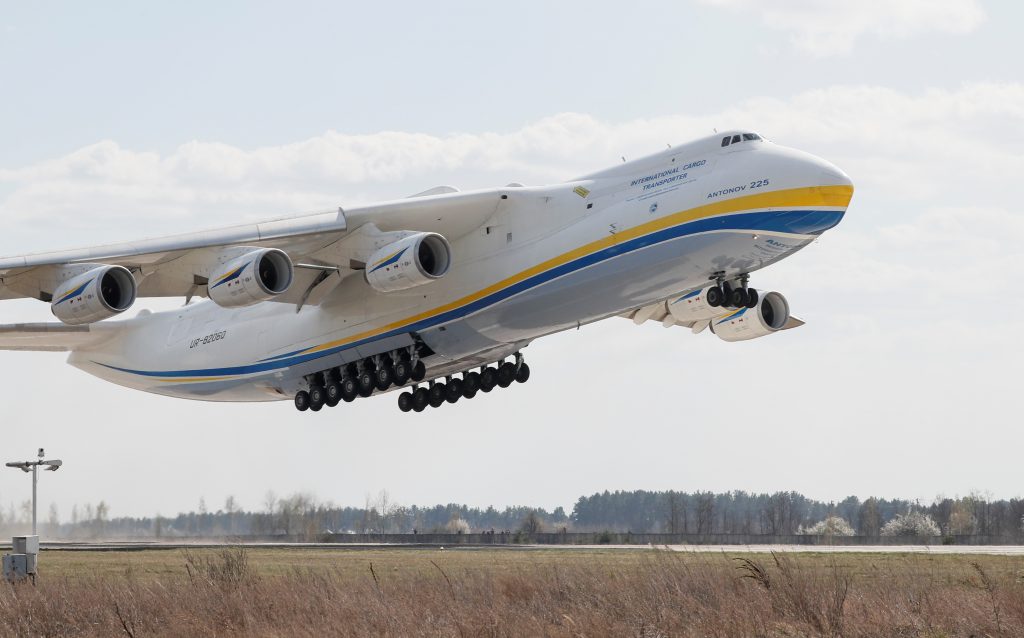 It seems that NATO Secretary-General Jens Stoltenberg is the latest international leader to join the fan club of Ukraine’s giant Antonov cargo planes. “I saw these planes. They are huge. They have extraordinary power,” he observed earlier this week.

The NATO leader’s comments came in response to the prominent role currently being played by Ukrainian Antonov planes in the delivery of medical supplies from China to NATO member countries as part of the fight against the coronavirus pandemic. This air freight cooperation, said Stoltenberg, was an example of the close cooperation between NATO and Ukraine.

Ukraine’s fleet of colossal Antonov cargo planes are certainly good at attracting attention. The fleet’s flagship aircraft, the An-225 Mriya, is the largest transport plane in the world and turns heads wherever it goes with its towering frame, 89-meter wingspan and 32 wheels.

When the An-225 touched down at Warsaw’s Chopin Airport on April 15 carrying 100 tons of medical equipment from China, tens of thousands of viewers tuned in to live online footage of the plane’s arrival. Ukraine rarely enjoys soft power successes on such a scale.

The involvement of Antonov’s poster boy An-225 is always a surefire way to spark public interest, but this is only part of Ukraine’s much wider air cargo delivery role in response to the global coronavirus crisis. A number of the slightly smaller but still extremely large Ruslan-class Antonov An-124 planes are also engaged in deliveries as part of Ukraine’s ongoing participation in the Strategic Airlift Interim Solution (SALIS) program in support of NATO and European Union air transport operations. Ukraine has been involved in SALIS for a number of years, and signed a three-year extension in January 2019 which will see the country’s participation continue until the end of December 2021.

The current coronavirus crisis has provided Antonov with what can only be described as a golden opportunity to demonstrate its worth to Ukraine’s international partners. In recent weeks, An-124s have already flown urgently needed medical supplies from China to the Czech Republic, Slovakia, Poland and France, while further delivery missions to Poland and Germany are also in the pipeline. This engagement is helping Ukraine to underline the country’s value to NATO as a strategic partner.

The timing of this demonstration is highly convenient from a Ukrainian perspective. For the past six years of hybrid warfare with Russia, Ukraine has relied heavily on the continued support of the country’s international partners as a counterweight to the Kremlin. The role of Antonov planes in the fight against the coronavirus pandemic is now allowing Ukraine to show that it is also capable of contributing meaningfully to Euro-Atlantic security. Indeed, it could be argued that few other nonmember countries have made such striking contributions to NATO operations in recent years.

It is important to point out that Antonov is not doing this work due to a sense of solidarity or goodwill. On the contrary, Ukraine’s involvement in the SALIS program is on a commercial basis. However, this does not diminish its significance as an indication of Ukraine’s importance as a partner nation. Instead, this commercial partnership underlines the material benefits for Ukraine of closer ties with NATO and the EU at a time when the country is facing significant financial challenges.

Doubters may well argue that Antonov’s provision of paid delivery services does little to directly benefit Ukraine’s country profile in the international arena. Such skepticism overlooks the importance for brand Ukraine of associations with this kind of positive coverage.

Nor is it in any way exceptional for countries to receive an image boost thanks to the high profile of individual companies. For example, Finland was able to significantly strengthen its national brand on the international stage with the help of specific Finnish companies such as Nokia and Angry Birds. There is no reason why Antonov cannot serve the same function for Ukraine.

The involvement of Ukrainian aviation in efforts to combat the coronavirus pandemic is a good excuse to challenge the dominant and largely negative narratives surrounding the country. Instead of appearing as a perennial victim always in need of help and protection, this allows Ukraine to present itself as a predictable and competent partner that is more than capable of contributing to transatlantic security.

It also serves to counter claims from opponents of Euro-Atlantic integration that Ukraine has nothing to offer the Western world and can only engage on the basis of charity. In reality, Antonov’s enormous and immensely impressive planes are merely one eye-catching aspect of the considerable added value Ukraine can offer to the Euro-Atlantic community.

Alyona Getmanchuk is the director of the New Europe Center. A Ukrainian-language version of this article was originally published by Ukrainska Pravda and is republished here in English-language format by the Atlantic Council with the author’s permission.

Image: An Antonov An-225 Mriya plane takes off from an airfield outside Kyiv. April 11, 2020. REUTERS/Gleb Garanich